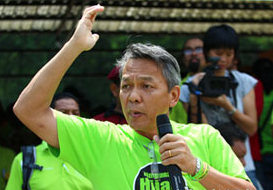 These "opposition"-type do not give-up so easily. Not even when they have taken over the government.

With the benefit of being in the political leadership and access to civil service support, they should have a better picture of the various considerations in any decision by government.

Lynas Advaned Material Plant (LAMP) received extension till February 15 of the temporary permit to store residue at its site. Immediately, Wong Tuan Tack, the MP for Bentong from DAP responded to urge the PH government not to repeat the mistake of the previous BN government.

It is perhaps ego to show they are right and it's not just politics. Maybe it is a matter of face after the anti-Lynas failed to prove their point at the PSC public hearing then. Probably they have something more than questioning government and various agencies for approving the licences and site, thus should not give up. Since Pahang remained with BN, it could be political.

Earlier in mid-October, Wong pledge to continue to fight on the claimed environmental cause of Lynas. He and another champion of the issue, MP for Kuantan, Fuziah Salleh, was requested to vacate the LAMP executive review committee.

The Lynas defiance is interesting on many accounts.

Saifuddin's mouthpiece to reply Anifah is one week late 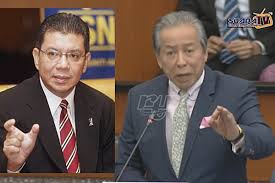 One would expect a columnist with accolades of assignments and Harvard mentioned in his resume like Phar Kim Beng would have given a decent commentary to Dato Anifah Aman's response in Parliamant to Malaysia Baru's new Foreign Minister, Dato Saifuddin Abdullah.

Phar's reply to Anifah's calling of Saifuddin as not "well-versed" in South China Seas issue was to reduced it to as hackneved.

He then ridiculed the expertise of a former Director General of Maritime Department in the Foreign Minister, who was recently sent to France as Malaysia's new Ambassador, as Anifah's only expert on South China Sea.

Subsequently, he was throwing the names of few diplomats, which was not quite clear whether he was potraying Anifah as getting the wrong advise from the wrong people or Saifuddin seek advise from better diplomats.

Phar seemed to run down all the diplomats which advised both Anifah and Saifuddin. This technique in debate is hackneyed, meaning overused; unoriginal and trite. It is so DAPish to run down without giving a fair and honest assessment.

Forget politics ... What about our lives and the economy, stupid! 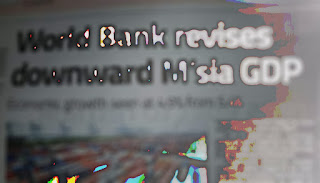 Voters turnout for by-elections have been low and the same expected for the return of Dato Seri Anwar Ibrahim via Port Dickson.

Many more charges against Dato Najib and now Datin Seri Rosmah. Will it make the public more angry towards them or if it is overdone, could it result in public sympathy?

Tan Sri Zainuddin Maidin is lendong a hand to spew insults to fire up hatred but again, no charge sheet is ready. Printer's fault at the AGC.

Was the hurried charges meant as diversion to an unproductive London-New York-London trip for PM or divert attention from PD for PPBM's subtle attempt to deny Anwar of victory?

Apparently claimed a source, few of the candidates in PD are being funded. But wonder who cares for all these politics when life is getting difficult.

World Bank forecasted Malaysia's economy to grow slower than expected. [Read in NST here]. Cost of living for B40 went up in multiples. [Read TMI here.]

PH campaigned on this issue but when in government, only aggravate matters. So the need to cook up a RM1 trillion debt lie!

If that is not bad enough, official government statistics for August confirmed trade contraction for the world's 16th largest trading nation. [Read here.]