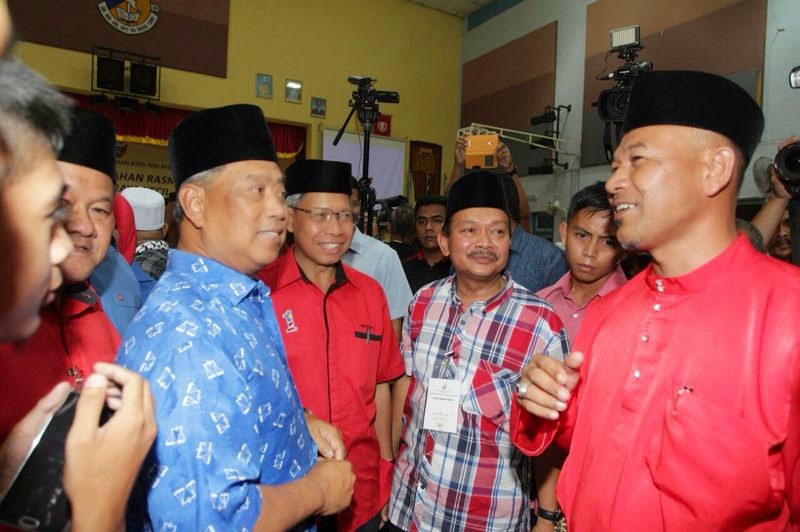 We had an article ready entitled "The Last Stretch", but couldn't load it.

Internet was just 'gampang' and unpredictable in Tumpat. Then, we changed the tittle to "Last 48 Hours" but still couldn't get it posted from deep inside our place in a PAS-laden coastal village.

By the time, we get a good Internet service this morning in Kota Baru at Riverside Hotel, we have to eat our words due to the last pessimistic posting. However, we are only too glad to eat our words. If the last posting had awaken many sleepy eyes, better still.

The campaign started well but was not heading anywhere with too many no(s) and don't(s). BN was not getting it's message across and not even looking defensive. But, we are not saying Tok Pa-led campaign was ill prepared. Hardly, they had prepared well ahead.

Kudos for the win to the Kelantan state UMNO. They took charge of the campaign and at the end, the result worked out and proved many points. It must be a sweet victory to the constantly worried looking To Pa. 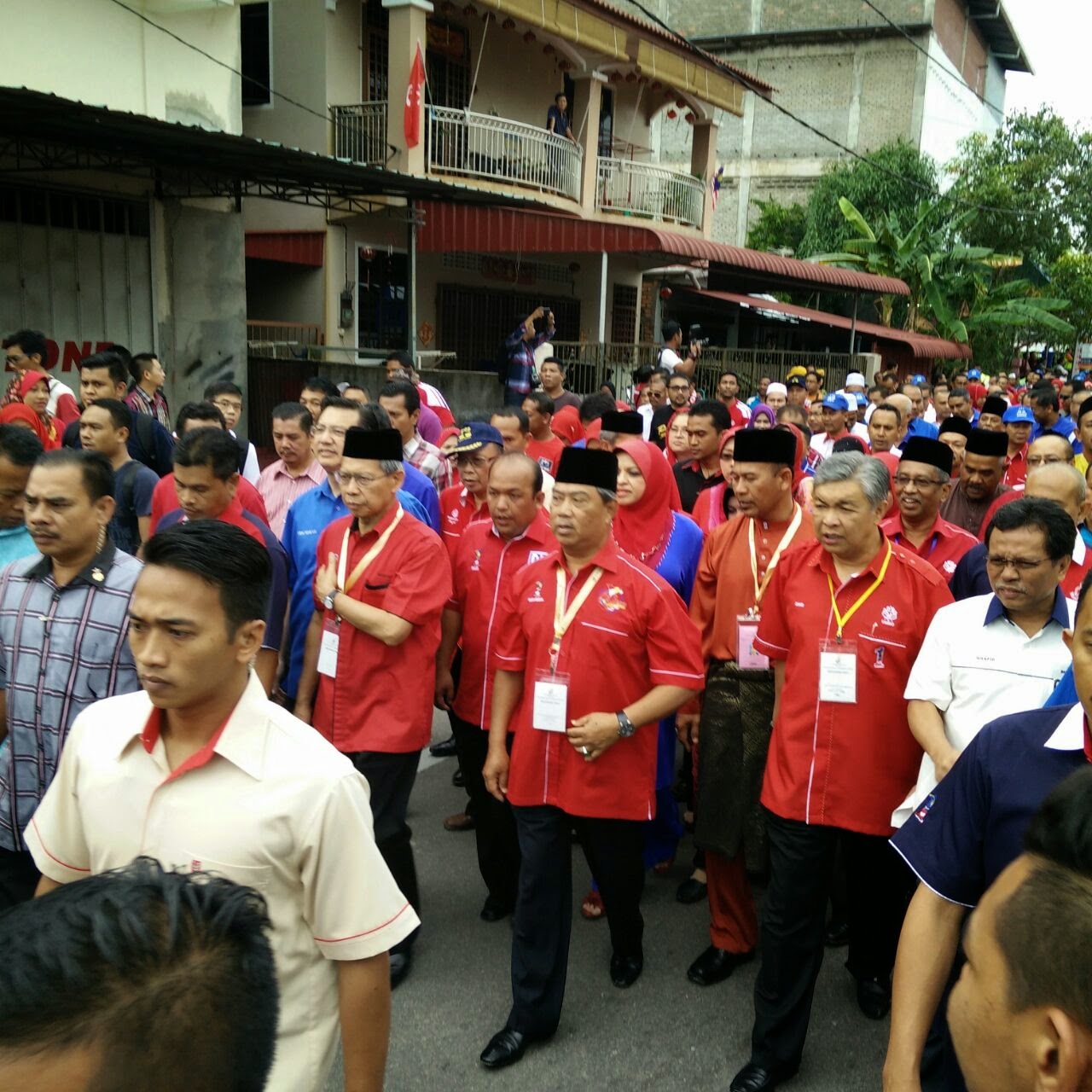 After several days monitoring the Pengkalan Kubor, Kelantan by-election, our hunch is Barisan Nasional could lose their thought-to-be-safe seat. Don't ask us why but ignoring our hunch usually come at a cost.

It is not that BN or UMNO Kelantan did not prepare and make prior effort before the nomination. They did prepare themselves early to address all campaign promises of the late 3-term state assemblyman, Dato Norzaidi.

In the early stage of the campaign, there was a healthy turnout at the nomination and initial activities. After a week, somethings does not seem right. It does not have that winning feel. All the touching with fence-seaters did not carry much political message.

BN seemed not to be reading and countering PAS strategy.

Did AG failed to properly advise Najib on the implication of lifting EO? 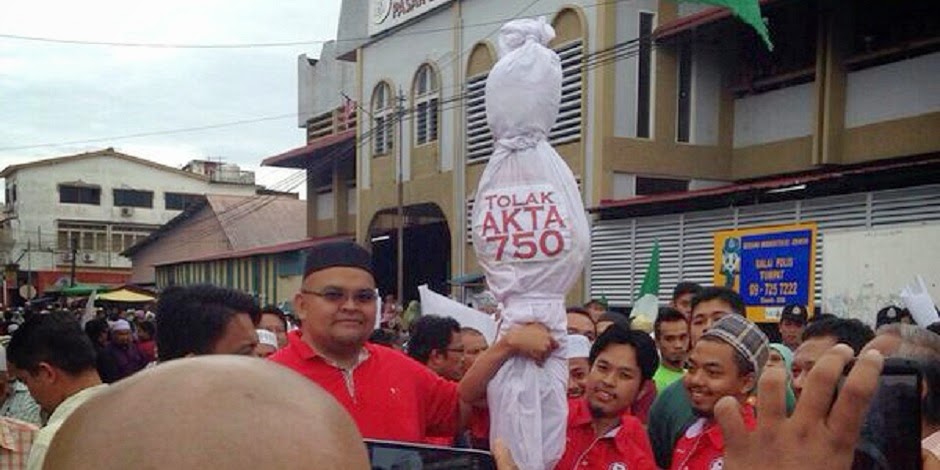 At the Pengkalan Kubor by-election nomination, PAS sponsored group, Royalti were in red parading  an effigy written the words “Tolak Akta 750”. The group is seeking all states to reject the Malaysia Territorial Sea Bill 2012 or ACT 750 tabled in Parliament on April 18, 2012.

They argued since all law passed and gazetted related to ownership of continental shelf enacted during the period of emergency May 15, 1969 to February 20, 1971, are null and void since the lifting of emergency on November 24, 2011. The law enacted to enable Malaysia conform to UNCLOS, need state endorsement before it could be enforced. [Read Suara Sabah here]

An immediate reply to PAS is needed although Dato Takiyuddin claimed BN would be deemed as contemptuous of the court should they do so. Naturally, they justify their ceramah attack on Petronas as acceptable.

The Attorney General (AG) may insist that there are Constitutional provisions to allow laws enacted by the Yang Di Pertuan Agong during the NOC (or MAGERAN) period but the damge is done.  The rush for political expediency to lift EO and repeal ISA had left room to dispute the existing equilibrium of law and order.

Was the Government and in particular, AG sloppy and reckless in repealing ISA and lifting the EO in 2012?

Posing questions or intention to slander for corruption? 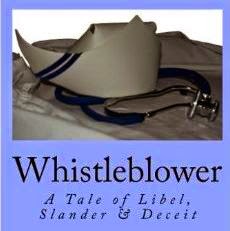 No doubt as "investigative" blogger, we have expressed our suspicion of corruption, kickback and collusion of certain transactions, especially corporate transactions.

However, it is dangerous to assume without a logical explanation. The explanation must tally with procedures and usual process of tender. Sensible documents be presented to substantiate and it must be sensible.

When it involved government contracts, too often the public and even professionals have a tendency to assume the occurrence of corruption without knowing how the process of awarding contracts are done.

Frankly, it is the same ol' shit ... from Amokh 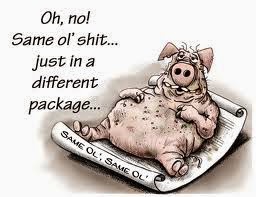 Being critical of Khazanah, we held back our reaction on the announced turnaround plan of MAS by Tan Sri Azman Mokhtar. After many have said their piece of mind like in Rocky Bru's commentary here, it is our turn to do so.

So far, the best description to the plan is by parodying an ole Boh Tea commercial from the 1970s.

The 12-point plan document produced by Khazanah and announced by Amokh [read here] is filled with verbage of new management terminologies like BPO for outsourcing which gives an impression that something new is being introduced.

From the first glance, anyone whose been following MAS over the last 14 years will immediately realised that it's the "Same ol' shit ... just in a different package" from the same bunch of hogs that put MAS where they are today. Some business reporters that follow MAS agree.

This time, it is no more fair to blame the CEOs. The strategy formulation and planning was done by Khazanah Nasional. They continuously failed to turnaround MAS from the time the Binafikir plan was implimented in 2000.

Since Pakatan Rakyat became state governments and more dominant in Parliament, Malaysia is constantly in a state of havoc. It is no more as peaceful as it used to be. Political debate, discourse and quarrel dominate our lives than the agenda to build a nation.

The more liberals would say it comes with the openness and people cannot remain passive and subdued by the authorities. To some extent it is true, but it should be done with maturity and in a peaceful manner.

Conversation on few Whats App groups yesterday was about the absense or more precisely, minimal presence of Chinese at the Merdeka parade. It was as though there is a concerted effort to boycott Merdeka. Maybe Chinese do not like participating in parade.

During the many Bersih demonstrations, one could see Chinese maintained a token presence. The incident of Pasukan Peronda Sukarela (PPS) paraded in Penang but to a waiting police will only deter them.

It is poor taste on the part of police to take in the 154 PPS members on a day to exhibit patriotism and unity as Malaysians.