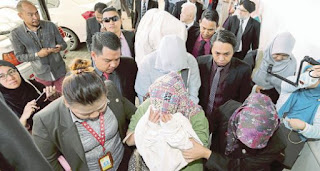 Hoping for settlement between Saudi and Iran 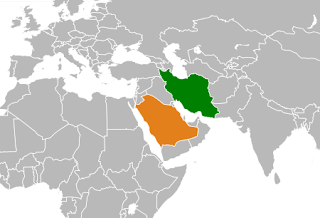 Thirty two men, mostly Saudi Arabia’s Shiite minority were arrested in 2013 and tried in Riyadh in February 2016 for spying on behalf of Iran.

By early December, the court sentenced 15 men to death, 15 others received prison terms of six months to 25 years, and two were acquitted. Two were foreigners; one Iranian received a prison term and one Afghan was acquitted. [Read NYT here]

There were war of words as a result of the death incidents in Mina involving Iranians in during the Haj season of 2015. Each calling the other kafir.

By January, Saudi broke off diplomatic relation with Iran on January 4th following the ramshaking of their diplomatic missions in Tehran and Mashhad by protestors. This year Iran stopped sending pilgrims for Haj.

Bilal Y Saab wrote in Newsweek on October 18th [read here] predicting an Iran-Saudi conflict as inevitable. Averting war is a priority for the next US President.

Both countries have been embarking in proxy conflicts in Syria, Yemen, Lebanon, and Iraq, as well as Central Asia and Pakistan. 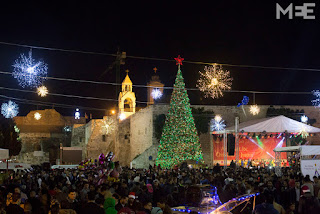 It is reported at the moment, Palestinians are beginning to gather at Manger Square outside the Church of the Nativity in the Israeli-occupied West Bank city of Bethlehem to attend a Christian scouts performance.

The Church of the Nativity is built over the spot Christians believed Mary gave birth to Jesus.

Is DBKL cavorting in Mahathir cronies' lease and "lesap" scam at Bukit Kiara?

Well..that was what they all said back in the mid 90s. Not all of us have short memory, That was when residents in Taman Tun Dr Ismail fought to retain and preserve Bukit Kiara as a green lung reserve. These residents were fighting powerful developers and the Kuala Lumpur City Hall.

And that was something I could not understand -- fighting City Hall to preserve the environment.

And I still cannot understand. 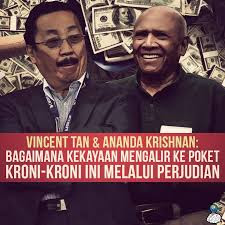 Apparently, it is not just Tan Sri Vincent Tan that got cheap 70 acres of the land planned for national park and a 70 year land lease in 1989. [Link is in here].

Another Mahathir crony was also "given" 40 hectares land at Bukit Kiara in 1998 in what looks suspiciously to be another ... 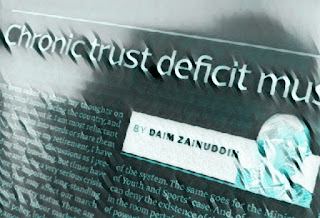 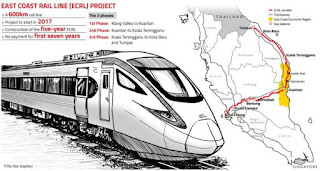 The Edge made a false claim that ECRL will be the most costliest rail in the world.

Subsequently, it was made an issue during the parliament session. It was sensational thus it became the subject of conversations at office water cooler, coffeeshops and rumour mongering platforms of Whass App and Telegram.

A commentary in The Mole here dispel such claim. An extract below:

The estimated construction cost for a California HSR line is USD55m per km. And, HS2 planned for Britain is estimated at £78.5m per km.

Even though it is not an apple to apple comparison, surely ECRL cannot be “the world’s costliest railway”!

He agreed construction cost is not only relevant but critical in any successful implementation of expensive rail projects.

Malaysiakini is fair to remind public transportation do not make money. All of Mahathr's privatised public transport initiatives failed and need bailout by government. [Read this article by The Telegraph here on proper discussion on cost]

However, the issues raised against ECRL tend to be political sensationalism and trivial. It is not looking at the perspective that matters most i.e. long term economic development.

Changing ... a whiter shade of pale

And it is never too late in life for a new year resolution. There are resolutions that will remain pledged year in year out ... kaizen for continuous improvement.

Few actions taken in 2016 involuntarily turned out worthy for a new year resolution - to change and be yourself.

Will follow what the instinct say. It is usually right. 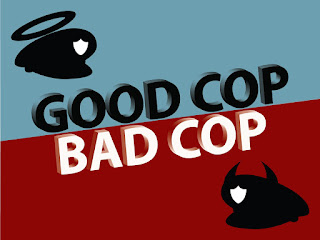 It's easy for good intention to be downplayed by politics.

Just because the Rohingya cause was championed by both UMNO and PAS, doubt have to be implanted. Immediately, the joint demonstration is painted as mere political hype.

The humanitarian effort is being downplayed with bigotry inclination. If the genocide victims were Myanmar Buddhist, it will subtly allowed to be misinterpreted as though UMNO and PAS would not be concerned. Some outrightly infer it is a Muslim versus Buddhist clash.

It is a humanitarian disaster and the situation is worsening. No politics please.

All parties should put aside local politics and unite to support the effort without question. It is the worse time to discuss and criticise policies for political mileage as Azrul Md Khalid did in FMT to claim Najib's megaphone diplomacy failed. 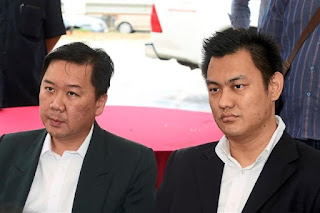 Thought the Protasco case of 2014 was a lost cause.

It was reported in July 2016 that the ex-Directors of Protasco, Datuk Ooi Kock Aun, 49, and Datuk Tey Por Yee, 40 were charged for failing to disclose their interest in their deal involving Protasco. [read The Star here].

Despite an attempt to put an injuction on the EGM from voting, Tey was ousted in late 2014. He subsequently sold his shares in the construction company much talked about for securing the privatisation of JKR road maintenance and having high VO. [read MMO and The Star here, here and here].

However, there was a yummy surprise.

New King and the many events to end the year 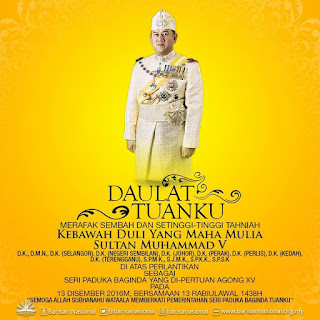 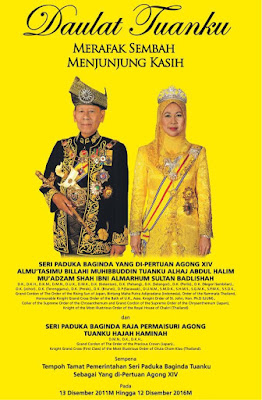 It marked a momentous end for the second reign of Almu'tasimu Billahi Muhibbuddin Tuanku Alhaj Abdul Halim Muazzam Shah as the 14th King. It is both historical and a unique event to many Malaysians' lifetime.


Over Friday sermon last Friday, the Imam reminded the congregation of the Maulidur Rasul celebration on Monday today.

It is the celebration of the birth of Prophet Muhammad s.a.w. on the 17th day of the month of Rabiul Awwal in the year of the Elephant 570 AD.

He received revelation in 610 AD. And made hijrah or migration to Medina in 622 AD, the commencement of the Hijrah Muslim calender. More in this biography here.

The Imam went at length about loving the Prophet in his sermon. The person next to us was reacting with controlled ecstacy to the many words of the Imam.

Bold call from a Johor delegate


The views from the UMNO state representatives debating the President speech on Thursday morning was coming out rather predictable and stale. With the sound of the beating election drum, bodeking was rampant from aspiring candidates.

As one DG of a government agency commented privately, it was too much rhetorical, lacked specifics, and insufficient information backing. At the rate they were talking, it will end up Najib Razak himself to do the thinking, planning  and implementation. "Mati berdiri la ..."

Our complain was the information or analysis presented are laggard. With news, information and analysis accessible to the masses in minutes upon occurence, much of the issues raised have been heard before and it sounded boring-ly repetitive.

Loyalty to counter betrayal from within 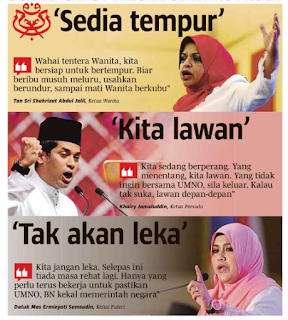 The common message for yesterday's UMNO wings assembly was clear. General election is coming and present General Assembly could be the last before the general election. It would narrow the possible election to within a year.

However, there were other subtle messages being delivered by the various wing. None more prominent than the message to and from Khairy Jamaluddin. It would mean Khairy and Pemuda UMNO will have a prominent role to play in the times to come. It is time for them to step up to the plate.

Much attention was given in various speeches to the betrayal by Tun Dr Mahathir against the party he led for 22 years.

It was Dato Dr Ahmad Zahid Hamidi and Khairy that carried the louder critics toward Tun Dr Mahathir. Zahid criticised Mahathir and "Boboi" for being in-cohoot with Soros. One should not forget that at one time, Mahathir openly seek for foreign intervention. While, Khairy reminded Pemuda not to forget Mahathir's betrayal.

Betrayal and loyalty stand out as the main theme in Najib's opening address at the UMNO general Assembly for 2016.