Has it gone down to press intimidation and gangsterism in Penang? 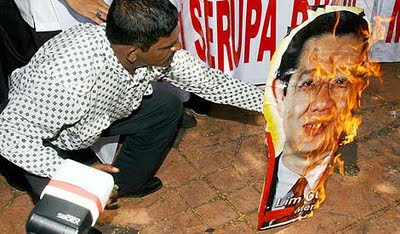 DAP claim themselves as the purveyors of freedom of speech and press freedom. Twenty months down the road after securing Penang, what has it gone down to?

Utusan Malaysia is banned from covering CM Lim Guan Eng's press conference. The excuse is that Utusan lied and spin news. But in actual fact, he is avoiding from his current camouflaged Chinese-centric policies been known to the Malay masses.

Last month, the blogs were hot with the story of Malay welfare recipient had to suffer the insult of receiving it at Buddhist temples. Pemuda UMNO Nibong Tebal published in their blog but succumb to withdrew the posting and apologise when DAP Youth made a police report against them.

Coming concurrent with press freedom is usually freedom of speech. The power to administer lies with the police but in Penang, it may have gone down to state vigilanteeism. An Indian demonstrator that set alight a poster of Guan Eng in November found himself a victim of hired musclemen. 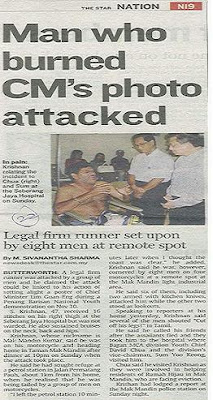 BUTTERWORTH: A legal firm runner was attacked by a group of men and he claimed the attack could be linked to his action of setting alight a poster of Chief Minister Lim Guan Eng during a Penang Barisan Nasional Youth demonstration on Nov 30.

S. Krishnan, 47, received 16 stitches on his right thigh at the Seberang Jaya Hospital but was not warded. He also sustained bruises on the neck, back and hips.

Krishnan, whose nickname is Mak Mandin Kumar, said he was on his motorcycle and heading home in Taman Mak Mandin after dinner at 10pm on Sunday when the attack took place. 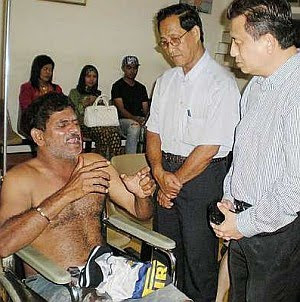 In pain: Krishnan relating the incident to Chua (right) and Sum at the Seberang Jaya Hospital on Sunday

He said he had sought refuge at a petrol station in Jalan Permatang Pauh, about 1km from his home, when he realised that he was being tailed by a group of men on motorcycles.

"I left the petrol station 10 minutes later when I thought the coast was clear," he added. Krishnan said he was, however, cornered by eight men on four motorcycles at a remote spot at the Mak Mandin light industrial area.

He said six of them, including two armed with kitchen knives, attacked him while the other two stood as lookouts. 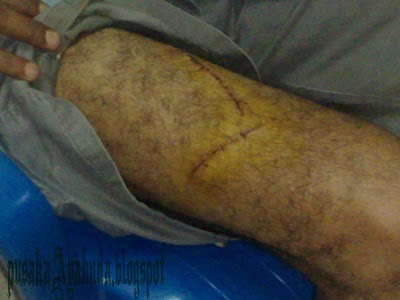 Speaking to reporters at his home yesterday, Krishnan said several of the men shouted "Cut off his legs!" in Tamil.

He said he called his friends after the assailants fled and they took him to the hospital where Bagan MCA division Youth Chief David Chua and the division’s vice-chairman, Sum Yoo Keong, visited him.

Chua said he visited Krishnan as they were involved in helping residents of Rumah Hijau in Mak Mandin, who are facing eviction.

Krishan had lodged a report at the Mak Mandin police station on Sunday night.

The Indians have been up in arms against Guan Eng since his own unfulfilled promise during the General Election to solve the Kg Buah Pala issue amicably. They dealt in an arrogant and inhumane manner by Guan Eng himself. At one instance, he refused to speak with the villagers through their representive.

He could have turned the century old village into a heritage village like Kg Chetty in Melaka. But, he chose to stoop to threat from big business.

S Krishnan was part of the demonstration organised by the Penang Barisan Nasional Youth that set alight the poster of Guan Eng.

One would have thought that it is just a typical demonstration. According to Pakatan Rakyat's usual modus operandi, the excitement ends with the demonstration. Thereon, it is media play and political propaganda dissemination.

This time around gangsters were hired to silence the Indian demonstrators from continuing to keep the Kg Buah Pala issue alive. S Krishnan was picked from among the many. Hear he described the ordeal in the You Tube video below:


The fact that S Krishan was hustled by Indian gangsters does not defuse the suspicion they were hired musclemen. It is common these days for Chinese gangsters to out-source such "job" to Indians.

Have press freedom and freedom of speech in DAP Penang gone down to press intimidation and gangsterism?

This is what they do when just they have a little power, imagine if they have absolute power God Forbid. Its likely the DAP have been infiltrated by Malaysian underworld elements Bro, I am not surprised at what is happening.

More worse things to come in 2010 it seems, if Lim Guan Eng is investigated and later charged for sedition, and going by the many witnesses and media recording when he uttered those accusative words in the PR gathering in Selangor about Beng Hock being murdered, I think he can and will be convicted a second time for sedition.

At the end of your writing, you asked "Have press freedom and freedom of speech in DAP Penang gone down to intimidations, and gangsterism?"

I'd say there was never any press freedom and freedom of speech within the opposition, much more within DAP itself.

On the issue of gangsterism, when the race(s) involve(s) is/are main race(s) in DAP, one couldn't help but wonder...

The so-called "Tiger" has turned out to be a kucing, if press reports are correct. He has effectively denied that he ever referred to the Penang CM or his office.

RTM has always lied to benefit the BN Govt., maybe just to protect itself from an intolerant group running the country. As a habit learnt over along period, it has also infected a few in that organisation. But that "Kucing" has stuck his tail between his legs and asked "Who says I said it was Guan Eng?" because the PDRM has been asked to investigate his allegation.

Your rudeness have cost your rights to get your posting viewed by others in perpetuity.