Felda listing: No stroll in the park 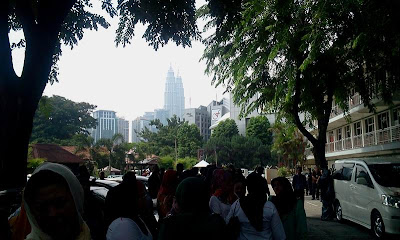 There were two demonstrations held by PERKASA and other pro-Government activists yesterday in reaction to another demonstration by PAS's Mazlan Alimin-led NGO, ANAK to support the mutinous FELDA Director General, Dato Dzulkifli Wahab and to support Government's effort to list Felda Global Ventures Holdings (FGVH).

One was a protest held at the PAS Headquarter in a Jalan Raja Laut, Kuala Lumpur. It was followed by another show of support at the Felda headquarter in Jalan Semarak.

ABITW was at Jalan Semarak to document the event and lent support. Something smells fishy when PAS initiated ANAK, which had been relentlessly attacking Felda's management, policies and implementations but gave personal support to the head implementor, Dato Dzulkifli.

However, what seem look like a straight forward listing excercise that is supposed to benefit the settlers, without 'touching' their land, is no more a walk in the park. The issue is discussed as we scroll through the demonstration pictures. 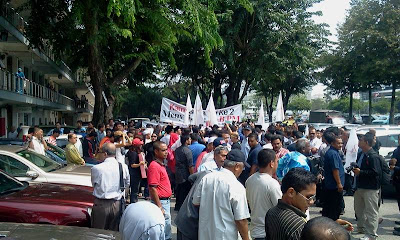 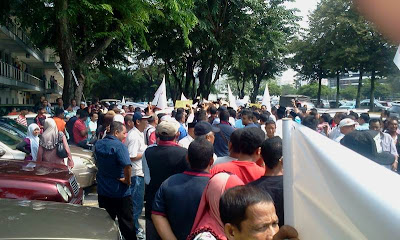 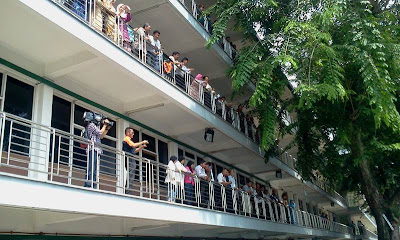 Dato Dzulkifli and Ketua Peneroka was stabbing the Government in the back while giving lip service to support the listing. As a 30 year old career Felda officer, he had garnered support and loyalty from veteran settlers over the years but unknown to them are he has allegedly been feathering his nest from the organisation and settlers. Read Bigdog here dan here.

There are issues that need to be addressed and clarified to the 'participating' settlers. Nevertheless, the listing of FGVH is a more sensible exercise in the Government's next step initiative to look into the affair of the second, third and fourth generation of Felda settlers. 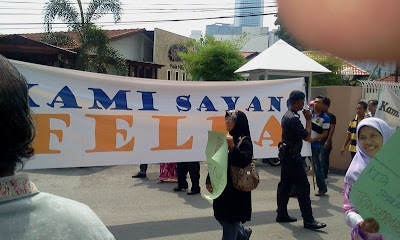 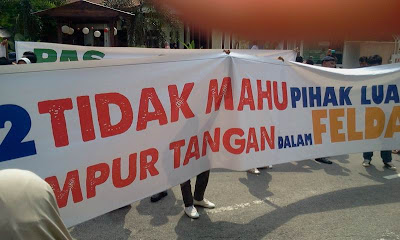 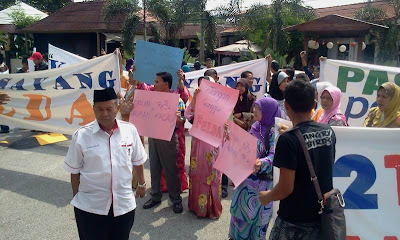 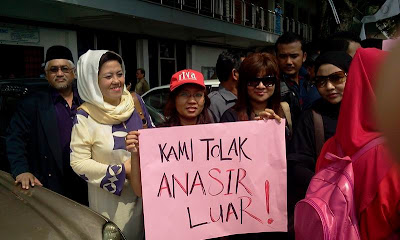 Talk has it that he had attempted to join the Board of Directors of KPB together with the recently ousted Tan Sri Yusof Nor. Words are Yusof Nor has been dismissed immediately as advisers.

Perhaps Razali need to make the denial since talk is rife of him making a RM2 million offer to UMNO's training fund and facilities on condition he be given post of Menteri Besar for Selangor for a term. His basis is to resolve the water impasse in the state that is being blamed on him.

The conditional offer was believed to have been rejected by Dato Najib despite Razali being a regular donor and Treasurer to UMNO Selangor. The grassroot is not comfortable to place a corporate personality that became an issue for UMNO to spell an opposition led demonstration in May this year. [Read The Unspinners here] 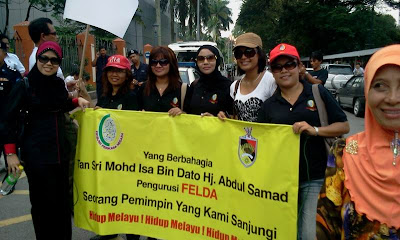 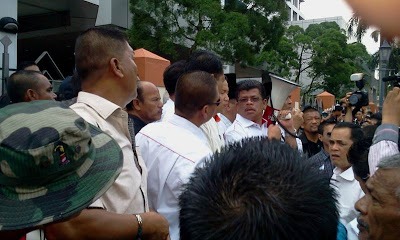 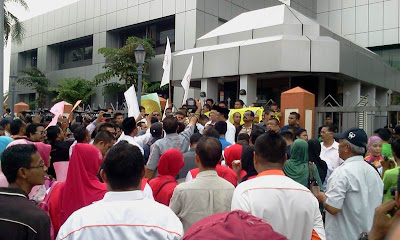 Water industry sources claimed Razali had met Selangor Economic Adviser, Dato Seri Anwar Ibrahim and reached a new tariff agreeement. Before the new tariff is announced, many would asked what is the deal behind the deal to enable them to reached an agreement.

Menteri Besar Tan Sri Khalid Ibrahim had refused to cooperate to build the new Ulu Langat dam. This is causing public anxiety and it was raised in the recent UMNO General Assembly. Without a new dam, Selangor and Klang Valley may face water shortage in 2014. Khalid and Razali were singled out. [Read Gerakan Anti PKR here.] 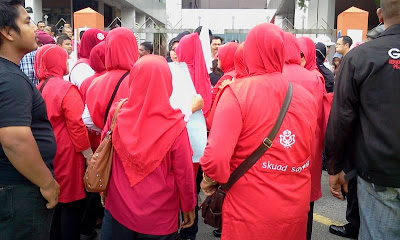 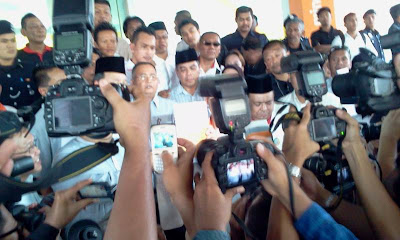 What is Razali up to? That is the big question.

Perhaps it is merely a second generation product of Felda not wanting to be left out of Felda's listing excercise. He listed his Puncak Niaga before Felda went listing. He needs to show off to the folks.

After all, he created BAPAK just to be on the same stage with Dato Najib but did not become the answer to Mazlan Alimin's ANAK. He merely divert all the enquiries and problems back to Felda. He created Koperasi Generasi Kedua, which has yet to be approved by Registrar of Cooperatives. 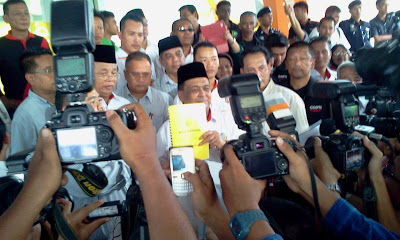 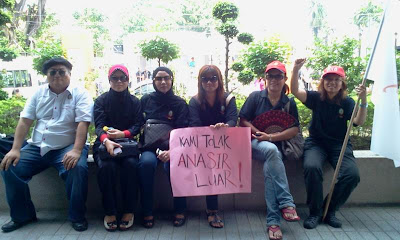 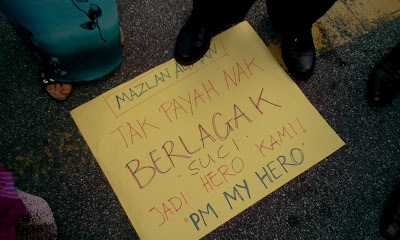 Let's leave Razali and his corporate greed and ego aside. Commissions, kickbacks, extravagant mark-ups and RM5.1 mllion a year Directors fee for a public utility company still does not satisfy his insatiable appetite. Unfortunately, he does not realised that he is neither a winnable candidate to wrest any opposition seats nor the pull to attract support for BN to takeover the state.

The display of anger towards such defiance and double cross is real. And the opposition's sudden interest in Felda is not welcomed. But the opposition is adamant to penetrate Barisan Nasional and UMNO's fixed deposit of 55 parliament seats. Read Sanggah Tok Janggut here and Gelombang Wangsa Maju here.

The listing is necessary to help distribute the benefit to all Felda settlers. If Mazlan Alimin's demand is fulfilled, how on earth could 350,000 ha of Felda Plantation land be distributed to some 700,000 second to fourth generation settlers. More so with 250,000 ha is in Sabah.

By the time FGVH is listed around April next year and the settlers got extra money in their pocket, one wonders if all the political effort of PAS-led ANAK matters? Chances are it will be forgotten. For Mazlan Alimin and ANAK, it was worth a try.
at 12/16/2011 04:42:00 PM

Another rip off in the making. Nothing will be left after they have laid their hands on anything that is saleable. What a sad state we are in right now.

The reality actualy ia that the peneroka will not benefit from this listing. The listed entity will take away about 1 billion in Felda profits and gain a one of payment to Felda of about 6 billion. The profit taken away will impact social and economic programs for the Felda settlers and if you do simple maths, the listing money will only last 6 years. Then where will Felda get money to pay dor these programs? The harsh reality is that the peneroka land is not as proftable and when you take the "cash cow" land out of Felda that doea not belong to the peneroka but from Felda proper and transfer to FGVH, you have a serious long term hole you need to cover. This is the actual truth and thats why the DG wants a thorough a study to be done first. He is a true Felda man and is a good man. The second generation Felda folk do not understand this and only see the short term again. The opposition is saying to the peneroka not to support listing as they will GIVE the land to them. This complicates things as other people now think that the DG supports the opposition. This is sooo not true. He is a loyal civil servant and the reasoning behind his questioning is purely for the good of the peneroka and NOT BECAUSE OF SUPPORT FOR THE OPPOSITION. People need to be clear on this.

Develop the topic further. It is interesting to find out more!

Get a life somewhere else.

Your comments will never see the lights here, you racist muther ducking pig!

I could rebutt point by pointthe weakness of some comments but I will not be engaging then.

Due respect to all my learned commentators (except you know who), could you all perhaps enlightened me how this additional effort for the 2, 3rd and 4th generation felda settlers is a rip-off?

Highlight the major ones and not over who deserve and not deserve.

In my book, the government have help and elevated the first generation felda settlers out of poverty and to many, into wealth.

It is not the government's responsible for the livelihood of the sons, grandsons, and great grandsons (including -daughters). It is their's.

When will this excess dependency syndrome ends?

Why limit to kampung felda only? How bout the traitional kampung folks?

Are they not voting citizens contributing and sacrificing for the nation TOO?

Why must you invest in Unit Trust? Simply because it is a business for those who does not know how to run businesses. LISTING is part of business too. Why Felda, why now and why not? If it is about risk, just look at Bursa Malaysia. Many ups and many downs. Its normal. Sometime spikes, sometimes corrections. Its normal too. And its for the Malays. Proud of it, support it and cut all craps about loosing. Business is business. Be strong and go for it. Dont hesitate. Go Felda Go.

Bloggers think with fingers whilst TS Rozali think with brain. That is why bloggers keep on blogging till now and TSRozali keep on businessing till infinity. Attacking the water tycoon won't hurt him much. He knows better than the bloggers about Felda and other relevant issues. The people gives high respect to constructive blogs and bloggers. Therefore, bloggers need to justify themselves to be part of an attitude public or keep play nasty in blogs and webs...

This blogger is neither envious nor has interest to be like Razali, especially so in his state as a crooked corrupt and greedy businessman.

Since Razali makes so much money and the commentator thinks that is an achievement, he should not be envious of blogger and just carry on to make money.

But why did he bought Siasah, a nyamuk media company?

BTW Razali wont be making money till infinity because he will die as any mortal and face God to account for his deed on earth.

It applies to you, anon and me too. Hope you have some ounce of conscience.

" This blogger is neither envious nor has interest to be like Razali, especially so in his state as a [crooked corrupt and greedy businessman]. "

"Therefore, bloggers need to justify themselves to be part of an attitude public or KEEP PLAY NASTY in blogs and webs..."

I am absolutely sure when I die, I do not have to justify to the Al Mighty my allegations.

My eyes, ears and mouth will bear witness to what I have seen and was told complete with supporting documents.

But, Razali will have to answer to God for his sins.

Thus, why do I need to bother about you ...It is for you to find out what many have already known.

I'd rather write on something else more important.