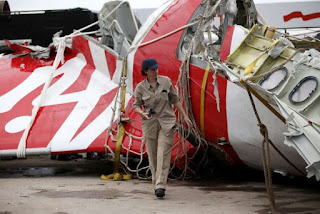 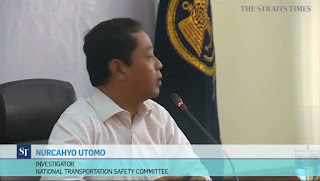 Problems with a glitch-prone rudder component and the way pilots tried to respond were major factors in the crash of an Indonesian AirAsia jet last year that killed all 162 people on board, investigators said on Tuesday (Dec 1).

Flight QZ8501 crashed into the Java Sea on Dec 28, less than halfway into a two-hour flight from Indonesia's second-biggest city of Surabaya to Singapore.

In their first public report, Indonesian investigators did not pinpoint a single reason why the Airbus A320 disappeared from the radar. But they laid out a sequence involving the faulty component, maintenance and crew actions.

Here's a quick look at the key findings of the report.

1. The soldering on a tiny electronic part in the Rudder Travel Limiter (RTL) was cracked, causing it to send four warning signals to the pilots. The RTL controls the rudder, a part of the aircraft's tail.

2. The crew resolved the issue the first three times, but on the fourth, the pilots tried to reset the system.

3. One or both pilots apparently removed and re-inserted circuit breakers to the flight computers. This led to a power cut and the autopilot was turned off.

4. The rudder turned 2 degrees left, sending the aircraft into a 54-degree roll.

5. With no autopilot, the less experienced co-pilot took over the plane. He appeared "startled" and "disorientated" as the aircraft banked sharply. He kept pulling the nose up until the plane stalled, a state in which it lost lift.

6. The captain shouted "Pull Down", a command investigators called "confusing" as a clearer order to point the nose lower and stop stalling would be "Push Down" or "Push Forward". The captain did not take back control as a senior pilot seated at the controls is required to do in such an emergency.

7. The plane entered "a prolonged stall condition that was beyond the capability of the flight crew to recover".

8. The plane reached an altitude of 38,000 feet before falling at a maximum speed of 20,000 feet per minute. There were "about five minutes" from the time it stalled to the moment of impact.

9. The cracked soldering in the RTL had malfunctioned 23 times over the previous year. The problem had generated maintenance reports. In the three months prior to the crash, the recorded reports came at increasingly closer intervals.

10. Bad weather did not play a role in the crash.

Tan Sri Tony Fernandes tried to divert attention by taking sympathy of the victims and family but he could not hide the alarming details of the findings.

One major concern is the 23 times patch up work of the Rudder Travel Limiter (RTL) within 12 months.

AirAsia Indonesia MRO allowed the aircraft registered as PK-AXC to operate when a single part was patched up 23 times within a short span of time. The equipment should have been replaced!

It is still unsure as to how the aircraft was certified and how tight was the process of certification done. It only shows there is a crack in the supervising authority's audit on safeguards. Such practises would not have passed the regulating authority in Malaysia. In Malaysia, the Department of Civil Aviation (DCA) issue the Airline Operator Certificate (AOC). It means the commercial air operators must pass the stringent requirements as per the Civil Aviation Act (1969).

DCA require and ensure that all the commercial airline operators have a complete documentation of all operations, safety procedures and assets. These documents, processes and records are audited. These include all MRO records.

Malaysian commercial airline operators have been issued with caution, to maintain the renewal of AOC. AirAsia was cautioned in 2012 on operational and safety manuals and documentation and was operating then on temporary AOC.

DCA adheres to the International Civil Aviation Organisation (ICAO), a global aviation body for all its certification issued to airline operators in Malaysia. They adhere to the standard in certification religiously because any defect in monitoring standards could result in Malaysian carriers not allowed to operate from countries abroad.

There is standard in the training of licensed aircraft maintenance engineer (LAME). In fact, this is one of the criteria for the AOC to be maintained and renewed.

There is standards on the technical crew (pilot) training. The AirAsia QZ8501 report highlighted that the technical crew made flawed and incoherent decisions upon the failure of the equipment during the flight from Surabaya to Singapore.

The DCA would constantly audit how the training of the technical crew is maintained and operated. To minimise risk, audit attention is on aviators training for emergency and crisis in the air.

There is also a new amendment to give DCA more teeth and jails and stiff fines await those who give false information.

The practises in Indonesia, and other countries - where AirAsia subsidiaries and associates operate under the single brand name of AirAsia - may not be as stringent as the practises of DCA here in Malaysia.

AirAsia started their maintenance with MAS but was reported to have moved to Singapore. At one time, rumours were going around that Singapore rejected maintenance work from AirAsia due to the tight terms offered by AirAsia.

Could AirAsia changed the domicile of some of their operations to get around the tight maintenance requirement in order to reduce cost?

Website Travel Mole reported aircraft engineers believe that aviation industry will not learn from this tragedy. Aircraft Engineer International had issued a statement on the AirAsia QZ8501 report. An extract below:


"The public must be made aware that aviation today is driven by cost. Cost, not safety, is paramount.

"Pilots and Engineers are often placed under increasing pressure to accept second best, in order to ensure aircraft meet unrealistic flight schedules. The consequences of which are more incidents and ultimately more avoidable accidents."

In the long run, the obsession to lower cost will eventually translate into higher cost from the occurance of other costs. Extract from The Malaysian Reserve below:


Shukor Yusof, founder of Johor-based aviation consultancy Endau Analytics, said AirAsia Bhd will likely pay more to insurers following the report that alleged the Indonesian subsidiary of the budget carrier did not train its pilots sufficiently nor maintain the aircraft properly.

“Besides higher insurance premium, the airline will need to spend more time and financial resources to train its staff,” he told The Malaysian Reserve (TMR).

The company will need to allocate additional budget to ensure its aircraft are well-maintained and flightready, Shukor said.

“(The allegations in the report) may also deter potential investors as well as impact AirAsia’s talks with new bankers and creditors,” the analyst told TMR.

The market is speculating whether AirAsia’s founders are looking to take the airline private.

The initial public offerings for its Thailand and Philippine affiliates have been delayed due to poor market conditions. But some analysts question whether waiting for a conducive market is the right thing to do.

“The longer they (AirAsia) wait to raise capital, the worse the terms will be for the minority shareholders.

AirAsia also has problems with it's partner in AirAsia India.

It would have been cheaper for AirAsia to heed this blog's rather cynical and insulting comments in the past because the concern was genuine.

Come on bro... give them a break. Its xmas holiday. Dont spoil the mood.
Cheers