The big hearted conciliatory offering came with a stern warning.

The critical commentators saw it as no different than Najib's offer to talk privately or choose the General Assembly (GA) as the right platform to express concern.

They only see Muhyiddin was not allowed the chance to express his concern but Najib, the state and wing representatives was allowed the podium to speak. It is heard that Muhyiddin repeatedly expressed his dismay of being denied the opportunity privately to several office bearers of the party.

One veteran newsman claimed his sample indicate majority of delegates felt Muhyiddin should be allowed to speak. That may have forced Najib to have a more conciliatory but firm ending for this year's GA.

The Supreme Council may have been swayed by Tan Sri Annuar Musa's emotional plead for unity than confrontation at the GA thus deny Muhyiddin's right than allow the situation to worsen. One Deputy Minister imagined a combative opening if Najib was responding to Muhyiddin's address at the opening of the wings' meeting.

It is heard that Najib ended the meeting immediately. Other hard hitters like Dato Nazri Aziz was not allowed to speak. Nazri defended Muhyiddin from earlier call for sacking but after the Kelab Sultan Sulaiman event the night before, he was said to have a change of mind.

The "new" GA format unexpectedly pleased some delegates. There was more time for debaters to speak. The winding up session that usually take up time from afternoon till maghrib ended at around 5 to give ample time for delegates from Johor, Kedah, Kelantan and Terengganu to return home for work the next day.

The mainstream media tried to send a message of reconciliation for the next day issues. But the alternative news portal reported it as sceptical. Muhyiddin's reported response was, "Baguslah Presiden berbesar hati" but "What's next?"

Muhyiddin is adamant that he had not broke any rule for expressing his concern for the party and public's concern on the 1MDB/RM2.6 billion political donation thus he does not need to seek apology.

He had months earlier denied involvement in any plot to topple the BN government in Semporna. However, he has yet to reject Tun Mahathir's suggestion for Muhyiddin to replace Najib as Prime Minister although as recent as during the GA, he privately told a fellow office bearer that he is never interested for the #1 post but $*&%#@! Just allow him the chance to speak.

He had long been under suspicion of involving in a plot with Tun M to topple Najib. However, there have not been any proof. Muhyiddin's side had been careful in their political moves to avoid of any suspicion. He must have taken cognisance of UMNO history of President quarelling and sacking several Deputies.

He was fine till he raised the 1MDB issue. Though his supporters agree with him, it makes no sense for a Deputy Prime Minister to claim of not being sufficiently briefed.

1MDB had been called to brief Cabinet in something like 8 times. There had been fact sheet and countless number of papers provided. If it does not fulfill his curiosity, Muhyiddin could have emulated Tan Sri Shahrir for a private session with Arul Kanda.

At Kelab Sultan Sulaiman, Muhyiddin made no firm accusation against Najib and kept his comments within the boundary of concern for government and party.

But it is not a safe caveat to utter "penipuan","salah urustadbir", and take leave or resign by referring to selective social media comments as indication of public sentiment.

Some of Muhyiddin's boys and bodyguard may have talked more than necessary but it is not a confirmation that he is involved in any plot. The higher up one is the bigger the paranoia. One can expect those around Najib to get paranoid by the presence of Tun M at KSS.

Tun M had been meeting Clare Rewcastle and opposition leaders. He made his presence at Bersih 4.0. Foreign press, including that of Rupert Murdoch have been giving him the support to cast aspersion against PM.

He has yet to make good his allegations with any proofs but kept repeating questions that appeals to public and UMNO grassroot limited understanding of the technically complex issues.

Tun M has rebuted Najib's Presidential speech, and pre-empted the GA with comments on Najib's Taklimat, 1MDB clarifications, and open letter to members. If Arul Kanda will immediately response any allegation on his company, LSSReport is shadowing Tun M and JMD.

Though he is repeating himself and added no material to the attack, it is clearly intended to the grassroot UMNO. He is working towards a groundswell after disciplinary actions have been taken against several members from the group of UMNO Branch Leaders. 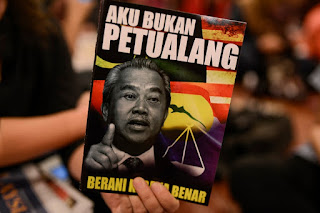 Singapore's Strait Times anticipate that Muhyiddin will hold a session to deliver his "winding up speech" to response to critics and issues against himself by delegates. He will want to rebut Najib's Presidential address and winding up speech.

The challenge for Muhyiddin will be to be his own self and shows the consistency of the setiakawan mantra that he preached. He had only became louder after losing his Deputy PM position thus should not be misconstrued as wanting topple Najib to put himself up.

His boys acknowledged that he does not stand a chance against Najib in this fight but felt grassroot support is building up for him. If he could make his message through, he will get Najib to head his message.

One astute UMNO observer and former think tank agreed with Muhyiddin's action to do the KSS but in a northern dialect term, he described Muhyiddin action as ghaflah or heedless. If he had wanted power and position, his past action was all wrong.

His crying call of "concern" sounded tame and serve no realpolitik purpose. And he looked unprepared and unplanned. Another political observer felt he should make a tactical retreat. Maybe play a role to help the party.

Despite the same content as the speech in Pagoh, Muhyiddin was speaking in Tun M's rhythm at KSS. Being usually long winded in his speech and discussion, Muhyiddin was more an opener for the more direct and effective Tun M.

In the same manner Muhyiddin latched to Najib for support to win the last Deputy Presidential race, he still keeping the option of Tun M as a raft to latch on.

So there will be questions raised on his concern for the party should he take actions deemed by party top brass as detrimental to the party. Expectedly, there will be accusation of Muhyiddin rejecting Najib's conciliatory offering.

With two years before the next GE 14, UMNO has to get themselves preparing. It is a time for unity and not of confrontation. Having a party election before GE will not help unite the party. UMNO members take party election more seriously and intensely than general or by-elections.

The mood of the delegates was for unity. They made known their disgust for confrontation and reluctance for another party infighting.

Chairman, Tan Sri Badruddin stopped Gopeng Division head from attacking Tun M. There was booing from the public. However, when YTL was mentioned in Najib's winding up speech, there was booing too.

Deputy Chairman, Tan Sri Mohamed Aziz stopped Dato Fathul Bari midway in his speech. Though he clarified it was intended so, Mat Aziz did not allow excessive flattering.

Tun M and his protun cybertrooper are not relenting. Tun M complained of being treated worse than opposition leaders. He said Najib's speech was all about himself and did not address issues of concern for the nation and party.

His side claimed branch leaders are supporting them though the numbers have not realised itself. The veteran newsman sensed sentiment among delegates is that of sympathy for Muhyiddin but are reluctant to get into another in fighting.

Tun M's side claim Najib's side is only supported by the Division leaders and held together by the political cliche against Najib of "cash is king".

If that is the tone and the way things are going, the in-fighting is inevitable. That is unless the Division leadership could fuse off the confrontation and redirect energy to prepare for election.

UMNO and BN could only win by default from the in-fighting among and within the opposition parties.

UMNO's willingness to cooperate with PAS on the motivation of a common enemy in DAP could be the saviour but it depends on how it is worked out.

MCA had to and has outrightly rejected PAS. MIC is on a wait and see. East Malaysian BN could not accept PAS and they are comfortable that PKR is working with both Amanah and PAS there. PKR said they need PAS to win in Semenanjung but DAP and Amanah rejected PAS.

DAP need to win in the Malay areas to assume the leadership of the nation from UMNO. They may not run against PKR, Amanah and PAS to take on UMNO but in Selangor, they already demanded to run in 7 state seats used to be Malay seats.

If Muhyiddin is willing to risk the party by his actions, he better damn well add more meat in his punches. UMNO Secretary General, Tengku Dato Adnan is not wrong to say Muhyiddin is talking on out dated issues at KSS.

The long list of suspicion has shortened considerably but the proofs on the various allegations has not been forthcoming. The argument that Najib halted investigation is already stale as more development emerge from Xavier Justio and allegations of tycoons backing to bring Najib down.

Destruction of any empire had a lot to do with the internal factor rather than the external one.

Competition is good since it propels performance further but when it is to stiff many unthinkable thing could happen.

why najib was crying murder as if he was the victim of all these? actually it was him doing the wrong things, and UMNO is the victim!

as an umno member it must be very hard to defend the party in the period of the most fcuked up in the party history. this is not helped by the fact that the president himself doing more damage than he already caused.

the whole 2.6 billion episode was handle with the most stupid way ever. as if the members thought some shouldnt be even mentioned yet those some were done by the people helming the party. take ahmad zahid hamidi for example. he said he met the guy and his son, then suddenly said he met the representative of the donor. then donor becomes donors. and then donors become heads of countries.

can u believe it?

some tried to be clever, saying donations are normal in countries, citing the US. but in the US they do it in the open, known to all dry and sundry. wsj cannot cari makan there in term of breaking secret donation news! but what happen here no one know of it.

so at this point its clear than the party is the victim of a man's reckless play. 1mdb issue isnt dead by any means simply because they didnt handle it properly. part if because of it and part is because the whole thing is stupid idea from day 1. can make money but 1mdb is stupid and failed idea.

so what is the price of the president? surely it isnt high as if he cant be replaceable. he can and he should atleast sit out on this temporarily. dont cite others didnt sit out to wait for innocency, because the others before him didnt bring the party down to this level !

any man is replaceable. the party continues to grow since the days it was formed. replace him.