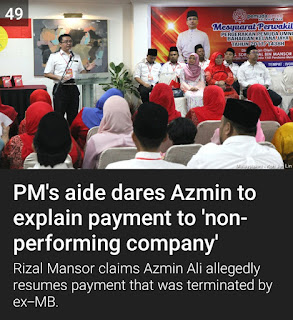 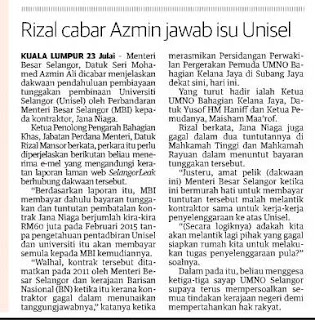 It has yet to explode in the mainstream media till Malaysiakini put the issue in play.

They reported Dato Rizal Mansor, assistant to former pro-Chansellor of UNISEL, Datin Seri Rosmah Mansor raised the UNISEL issue among many others at the opening of a Pemuda UMNO division annual general meeting in Kelana Jaya.

Rizal did not made any specific accusation but seek Azmin's answer to questions raised by an anonymous Wikileak-style portal, Selangor-Leaks.com (read Malaysiakini here).

He may have picked it up from Facebooks, and blogs postings (read Roket Kona FB here and Capt M here). 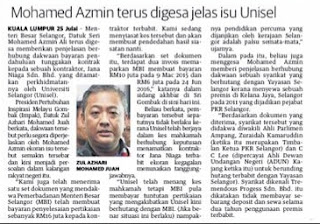 Azmin have been staying out of controversy by the not-so-CAT practise of ignoring and not responding to any public allegations made against him.

However, the manner Menteri Besar (Selangor) Incorporated (MBI) responded with a threat of legal lawsuit is rather strange (read Mkini here and here).

MBI is under the authority and any decision is solely that of the Menteri Besar. No committee or Board exist to buffer any blame.

Azmin could be feeling the heat and the portal is too close for comfort. It raised suspicion that something is rotten. The blog Flying Kick here posed that question. 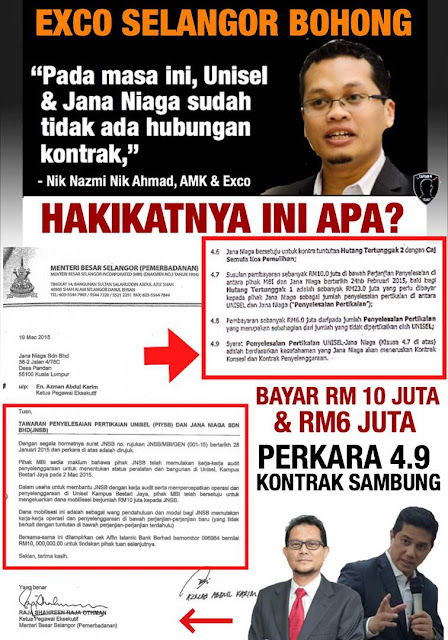 When asked why there was no court arbitration done as requested by the court (read Mkini here), Nik's answers was filled with political cliche but had zero content.

Sorry Nik, MBI hardly answered as to why the dispute between UNISEL and BOT-contractor Jana Niaga was done in such a manner.

Blog Capt M here accused Nik as lying and it was obvious Nik was hoping to divert the issue and protect Azmin. 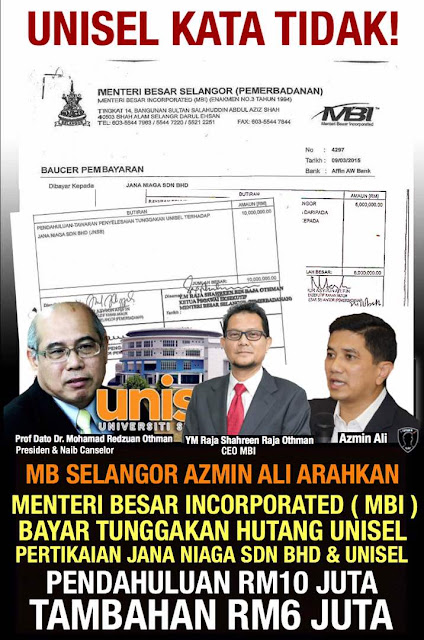 In short, Jana Niaga was to construct and maintain the student and staff accomodation but the hostel sank and Khalid then stop payment and cancelled their maintenance contract.

Jana Niaga made claims and took the matter to court all the way to the Court of Appeal. However, the court decision favoured UNISEL and instructed both parties to settle their dispute through arbitration.

It was not done. Instead MBI takeover negotiation. Their decision was to resume Jana Niaga maintenance contract, advance them RM10 million, subsequently paid RM6 million and all-in it is supposed to be RM23 million. 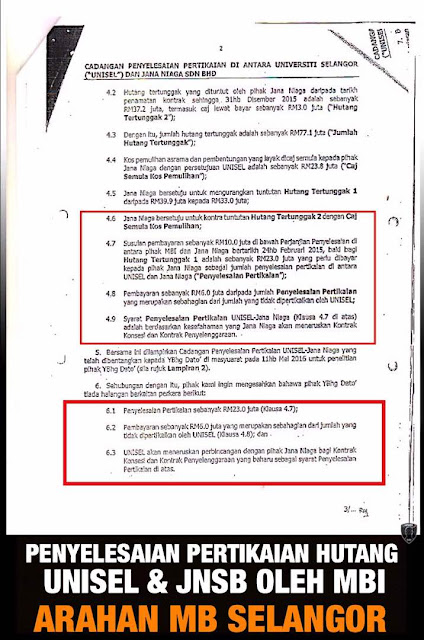 UNISEL was forced to accept the settlements, terms and offer new contracts which is suspected to be heavily in favour of Jana Niaga.

In addition, the corporate arm of UNISEL had to issue shares of RM60 million worth to MBI and pay for the RM58 million rehabilitation of the faulty construction works. 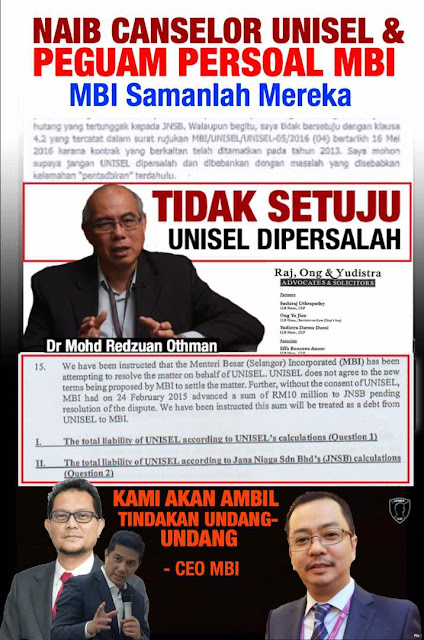 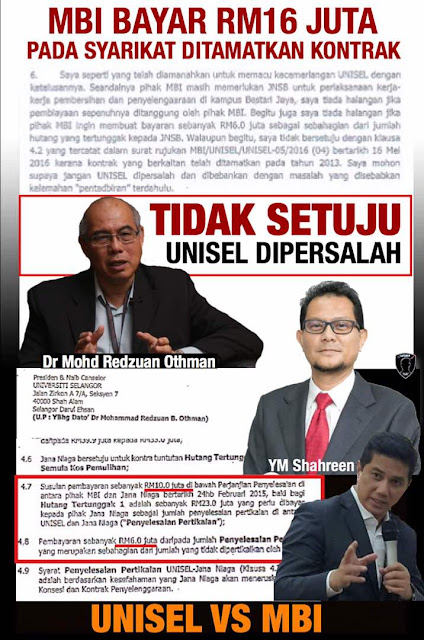 It is not just a possibility but quite sure that UNISEL were not happy. A legal opinion meant for auditors leaked by the whistleblower website mentioned so.

Instead of Jana Niaga pay to repair the damages, they are paid money and resumed contract. UNISEL had to borrow and bear the cost to make the student hostel liveable. 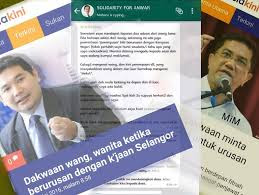 One could brush off this exchanges as political attack by UMNO towards Selangor's Azmin-led PKR government.

Apparently the Selangor-Leaks.com message has been viralling earlier before Rizal raised the matter in Klana Jaya.

UMNO Selangor campaign machinery did not taken up this issue but an opposition supporter and a vehement anti-Kartel opponent, Chegu Bard took it up.

He made a press statement that touched on the UNISEL matter. An extract below: 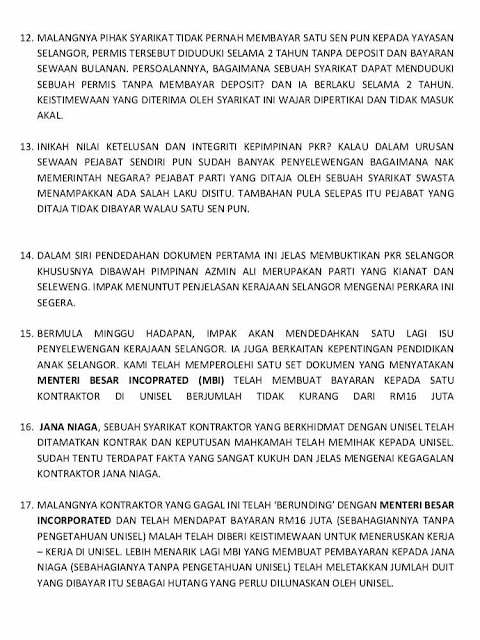 It does not matter what Jana Niaga do as a company to get the best deal or settlement out of any dispute. They are a business entity.

The question is why UNISEL or to be more precise, MBI behaved in such strange manner.

Blogger Life of Annie here claimed to have information that Jana Niaga is "own by an UMNO guy" and raised the questions:


"Why is it that his MBI is being so nice to such a company? Is the Umno guy a friend of Azmin from back during his Umno days or something?"

She, or Helen Ang claimed is a he, is right to say it is "Very weird, actually".

If true, Azmin will have his future in PKR decimated for working with the enemy at a time the majority economically struggling PKR activists are pissed as hell with his KARTEL group.

With Chegu Bard and questions raised by Life of Annie, one could also suspect that it is not UMNO behind the whistleblower website that emulated Wikileaks by revealing documents with the least comments to let it float. 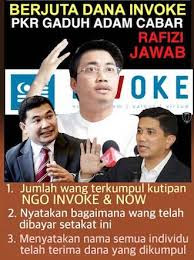 Best bet will be Rafizi.

Though he lied 95% of the time, he loves whistleblowing to the point of willing to be sued and face imprisonment. He also established NOW and now INVOKE. 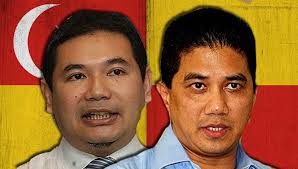 Rafizi is not happy to fall alone and pay up the court RM300,000 after the sacrifice he made.

More so, the play safe but conniving Azmin is already in the conscience of many as future PM. Within the Tun Dr Mahathir circle, Azmin is being quietly promoted PM.

Boboi is politely aloof and not sharp and quick enough as a leader. He failed in Kedah as MB.

It partly explained why the Azmin that his wife for the boss's consumption is staying out of any controversies.

Will Azmin finally get sucked in by the UNISEL issue? 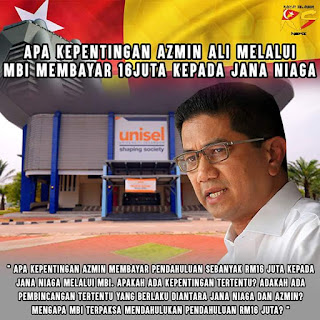 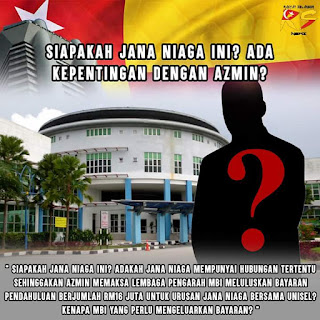 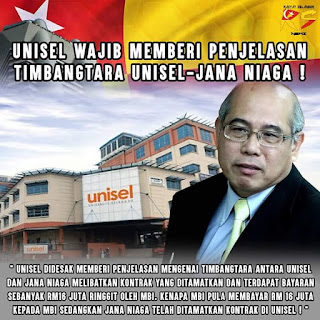 Issues are piling up and his attempt to raised the purchase price for SPLASH from RM300 million to RM2.7 billion cannot be justfied.

Is he batting for SPLASH or the state as he is supposed to do as MB to get the best deal?

The slick Azmin can try divert attention by viralling this poster below: 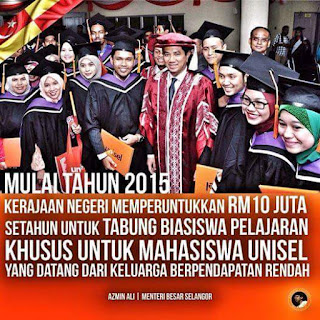 It appeared immediately upon the soft campaign against MBI on the UNISEL issue. But, didn't Pakatan Rakyat 2013 general election manifesto promised free education up to tertiary level? 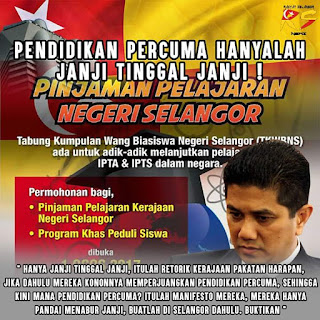 Why didn't Dato Noh Omar respond that way? Either he did not know or he is not too sharp.

Only an MACC report made by an UMNO outfit will absolve him from accusation that he kow tim and instructed UMNO divisions in Selangor to cease fire from any attack on Azmin.

It also serve Rafizi's purpose to cover up. He will deny and claimed it as UMNO handiwork.