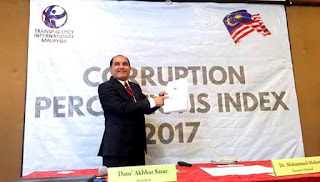 Despite relentless efforts by MACC to uncover and investigate corruption, power abuse and corruption related money laundering activities, their latest report puts Malaysia 7 points lower than the previous year and rank the country at 72 among 180 countries.

Without any misgiving and reservation, TI-Malaysia President Dr Akhtar Satar said the latest finding should serve as a wake-up call to the government and that recent developments including mentioning the old and buried issue of NFC pushed the country’s ranking further away from the targeted of 30. [Read FMT here].

By mentioning NFC in which Rafizi Ramli's recent appeal for prison sentencing was rejected, it proves that TI's perception based corruption index is seriously faulty. The message from TI-Malaysia finding is that perception on corruption worsen when MACC uncover and investigate high profile corruption cases.

Datok Paul Low proves the point [Read FMT here]. TI-Malaysia index implies that the countries better perceived in term of corruption are those that cover-up big corruption cases and anti-graft agency should do nothing. 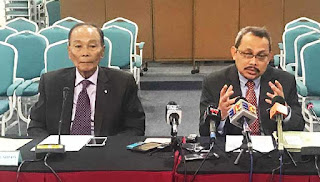 The latest TI-Malaysia finding baffled MACC's Chief Commissioner, Tan Sri Dzulkifli Ahmad described the finding as not reflecting reality. He said, "Malaysia should have been ranked higher in the 2017 CPI following the agency’s arrests and aggressive actions taken against graft suspects last year". [Read on in FMT here]

MACC planned to develop their own index [Read FMT here].

As exposed before in this blog, there was a orchestrated conspiracy to sabotage MACC with TI-Malaysia collaborating with a former MACC officials. It is believed to have political intention. This latest finding could only prove the point.

Already, there are numbnuts opposition politician seizing on the opportunity to use the latest TI-Malaysia finding to call on Dato Najib to resign. [Read TMI here]. He certainly is a credible politician as he succeeded to keep Malaysia's CPI kept low under Tun Dr Mahathir by holding back the six boxes of documents on Mahathir's wrongdoing.

However, political activist, Dato Huan Cheng Guan offered a political rebuttal to blame the opposition for the rise on CPI. In his home state of Penang, Lim Guan Eng is under constant attack for one expose after another and one lies after lies in his explanation on the tunnel project [Read The Star here].

The full statement can be found in his facebook here. His facebook also has a video calling for a change of the Penang government:


Yesterday, MACC was reported to have raided 5 companies including a law firm in relation to the Ijok land controversy. [Read Mkini here].  So one can expect Malaysia's CPI going further up the roof. Then it is suppose to be good for Malaysia.

The higher the CPI goes, it means more effort to uncover and investigate corruption and eventually make the crooks scared. Lets hope it goes higher next year -  the higher the better.
at 2/23/2018 09:31:00 AM