Didn't I tell you
Do not leave me for I am your only Friend,
I am the spring of life.
Even if you leave in anger for thousands of years
You will come back to me for I am your goal and your end.

Didn't I tell you
not to be seduced by this colorful world
for I am the Ultimate Painter.

Didn't I tell you
you are a fish do not go to dry land
for I am the deep Sea.

Didn't I tell you
not to fall in the net like birds
for I am your wings and the power of light.

Didn't I tell you
not to let them change your mind and turn you to ice
for I am your fire and warmth.

Didn't I tell you
they will corrupt you and make you forget
that I am the Spring of all virtues.

Didn't I tell you
not to question my actions
for everything falls into order, I am the Creator.

Didn't I tell you
your heart can guide you home
because it knows that I am your Master.

After a month hiatus and back to long left life of employment .... time to return back to this blog. 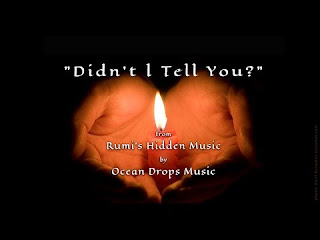 As we await for many years from the court  - as the proxy of truth in this temporal world and hopelessly believe there will be a fair trial and process of law to show us to the path of truth and justice, the temptation to say I told you so is unbearable.

Didn't I tell you about Azmin, on-going game changer plan, and many more that is revealing itself but  was not heeded. If one were to extend it beyond 2015, much more critics and questions had been raised on UMNO for its need to change.

Guess who are we to the more decorated, positioned, and close vicinity to the power at be.

With everything about to happen as expected and planned (for which the leak was not heeded), it is time to reflect. The involvement that stem as early as 1997 and more active from 2003 onward had its purposes and expectations.

The lost obviously did not offer a favourable outcome but the genuine list of concerns needed be addressed, which is the expected outcome from decades of involvement, too did not come to fruit.

Politics is what most Malaysians, particularly Malays felt as the route to change and address all the their's and nation's worry. Honestly, it only brings out more destruction.

Without mincing any words, the way things are moving today raised a feeling the country is not moving forward but retreating back to the 1980s, and moving to a state of chaos before any glimpse of calm, far from peace and posterity.

Not a single of the promises was going to be fulfilled. This retrospection back to the years, when we started out as a financially independent adult, could not make their promises realised. The world has changed but anger got the best of everyone to be easily duped into the likelihood of poverty.

More confusing is where UMNO is heading. Back in the 1980s, UMNO had a big quarrel with PAS and the exchanges was accusing each other of kafir. Now, UMNO is friendly with PAS?

Back in late 1990s, there was exchanges between Mahathir and Anwar which lead to the formation of Parti Keadilan Nasional (now PKR). The issue then was Anwar's sodomy charges. If the rumour is no more an open secret and it is true that Anwar is relying on UMNO's block to seize power, this is ridiculous.

There are many more examples of politics today that do not make any more sense and inconsistent to be logical.

The biggest has to be Tun Dr Mahathir, who fought DAP all his life, but now is in bed and even had to compromise to DAP's agenda (look out for the list as revealed by a mamak ex-DAP from Penang, Razali).

After the adventures in politics, activism, and intellectualism, the time is  either up or due for something more tangible and direct in result.