After the rain, by Najwa Mahiaddin featuring Juny. Auspices choice of song by an appropriate singer for the occassion to say its over for PH.

There will be few attempts, but its practically over. Tan Sri Muhyiddin Yassin sworn in as Prime Minister at the Istana Negara at 10.30 am. 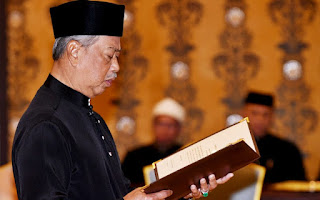 Last ditch attempt by Tun Dr Mahathir and Pakatan Harapan to dispute the SD and present a new one was ignored by palace. Referee blew the whistle yesterday. New SD do not hold water. 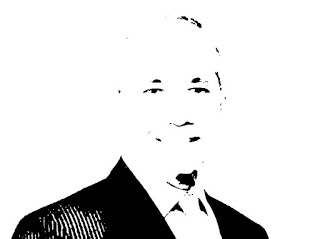 Perhaps they can try to do a vote of no confidence when Parliament convene but ....


“Too late. The Agong has decided. It's not the number of SDs. It's the opinion of the Agong whom he feels can command the respect of the majority in parliament. Now they can collect all the SDs they want, it doesn't matter. They can go to Parliament and show their support for Tun M there instead. If Muhyiddin loses the vote of confidence, he has the power to advise the Agong to dissolve Parliament and a new elections will be held, which is not what Mahathir or DAP wants. Agong and Malay Rulers have made a brilliant decision. Besides, what future will the country have if it's run by a 94 year old man. I think many factors go into Agong's decision to back Muhyiddin.”

Its an honest and sincere opinion from a former Minister, seasoned Parliamentarian who is an authority in Parliamentary practices, and practising lawyer.

He used to be in the police force, active veteran politician, pejuang, and a great person who loves his country, state, people and family. 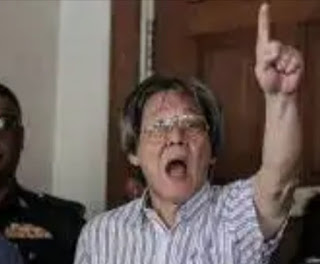 If courteous opinion does not get the point across, Matthias Chang, Mahathir's former Political Secretary had this to say, below:

Bright Sunshine on Sunday. It's a good Omen.

The King has spoken. He will not change his mind. The reasons the King gave for chosing Tan Sri MUYHIDDIN as PM as opposed to Tun cannot be questioned.

If PH and Tun are not happy, it is for them to wait for Parliament to be convened and then submit a properly drafted and valid motion of No Confidence for debate and vote.

Did not Tun called for a Special Session of Parliament to vote to signal to the country that he has the confidence of parliament???

But because he was not properly advised (this is truly unbelievable) the request was practically invalid as lacking of a proper Motion, as ruled by the Speaker of Parliament.

Tun did not challenge the decision. It was a non starter lah. All his advisers should be hung.

What a big screw up from such an experienced PM. I wonder who is the ARSEHOLE or ARSEHOLES (lawyers or otherwise) who advised Tun on that half baked application for a Special Session of Parliament.

Could not have been the AG as he would have a team of experienced lawyers at AGC to consult.

But, the Speaker was an experienced lawyer and be did his job accordingly without fear or favour. CAN'T SAY THAT OF TUN'S ADVISERS.

Tun by any objective measure could not be appointed because, inter alia HE COULD NOT EVEN COMMAND THE MAJORITY OF HIS OWN PARTY (Bersatu) TO BE PM. IT WAS ALLEGED BY HIS SON, THAT THERE WERE ONLY SIX MEMBERS ALIGNED TO TUN. THE REST WERE WITH MUYHIDDIN. Ouch!!!

THAT SAID, IT WAS TOO LATE TO SAY ANYTHING, AFTER THE KING HAS DELIVERED HIS JUDGMENT.

THE KING HAS DECIDED, AND BY ANALOGY WHEN A COURT HAS HANDED DOWN A JUDGMENT, THE ONLY RECOURSE IS AN APPEAL.

It is his judgment. Period. So simple also cannot understand.

Prior to the King's judgment,  all the MPs supporting whichever leader to be PM (including the name of Tun) confidently declared to the King and the entire country that they will accept the JUDGMENT OF THE KING, as to who is LIKELY to command the majority MPs.

The Constitution did not provide that he has to count the SDs or ANY OTHER DOCUMENTS TO ARRIVE AT HIS JUDGMENT.

One Arsehole in social media propose such a measure, that the King count the SDs. No reference to any provisions in the constitution. Real ARSEHOLE.

BUT, OF COURSE WE HAVE WANNABE CONSTITUTIONAL EXPERTS (LAWYERS OR OTHERWISE) GIVING COCK AND BULL OPINIONS ON SOCIAL MEDIA, JUST TO GET CHEAP PUBLICITY.

THEY DON'T COUNT AT ALL.

It is also astonishing to observe that PH nominated Anwar but as the King observed, and judged, ANWAR was not likely to command a majority. HABIS CERITA!!!

In desperation and influenced by idiots (whoever they are) Tun was induced to offer himself as a candidate based on PH assurances of a majority. By that time Tun has discarded his own party and members. Tun even resigned as the party's Chairman. But, before this opportunistic scheme, Bersatu had nominated MUYHIDDIN.

Tun was in fact skating on Tun ice. Very sad to see this tumble.

And in spite of the fact that there were no independent advisers or devil's advocates, Tun plunge head on, imagining the wisp of the stale breeze as the smell of victory, forgetting all the flip flops the previous days that he himself and other politicians have made to the Ki gand Country. Sarawak Report and Claire Brown gave some two sens worth of opinion,  but oddly MISSED THIS UGLY AND OPPORTUNISTIC FLIP FLOPS.

It was truly ugly and filthy, the nature of the flip flops. Disgusting, would be an understatement.

I therefore suggest to the entire country, GIVE MUYHIDDIN A CHANCE as to who he will appoint to his Cabinet. If he appoints crooks and idiots who have been charged for crimes and trials have commenced, then take whatever measures needed.

If he appoints decent and competent people untainted and on merits, what is there for Tun, PH and the RAKYAT to complain??? After all did not Tun Declared that he could work with any un- tainted and competent MPs from BN, including UMNO.

Don't tell me that PH are all Saints and competent? Tun rated them 5/10. What merits???

This is the first time that the income g Prime Minister was not chosen by Tun. All Tun's previoys anointed successors turned out to be arseholes. Be happy that this trend has been broken.

So, cool down, leave to Allah to guide this country.

After all, just before this big screw up, did you guys not demanded that Tun step down, move aside for Anwar???

Now that Tun is gone, and Anwar is not in the equation, you hypocrites should be happy. If you did not anticipated the inevitable consequences of demanding the ouster of Tun and or his resignation, THEN WHO DO YOU HAVETO BLAME FOR THESE RESULTS???

You are the ARSEHOLES and you should stop cursing and swearing and just sit still and wait. Pray as well. 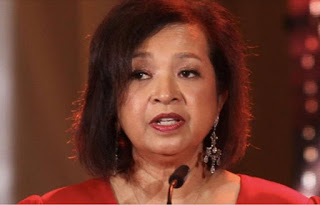 Perish any thoughts that all these are pre-empted and part of Mahathir's grand design.... 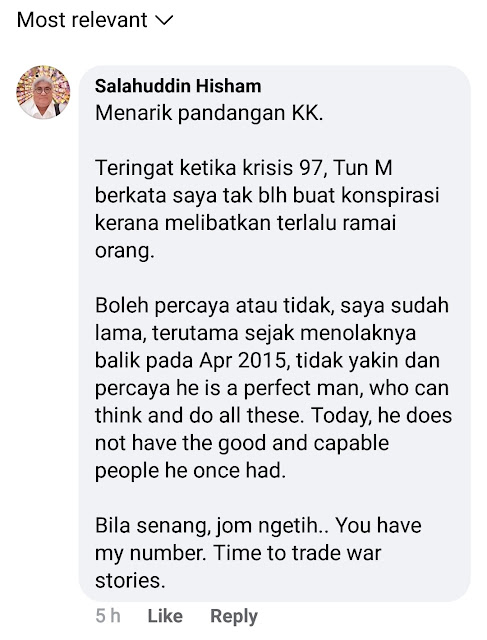 Maybe they sorely missed the three bloggers, plus the jeweller. Ha ha ha....

To Mahathir, Anwar and PH, they should be a good opposition. Rakyat is sick with their political drama. So it won't do any good. Win their heart by being good at what you do as opposition.