Nusantara: Differences in interpretation, but will it be new capital for the Malay world? 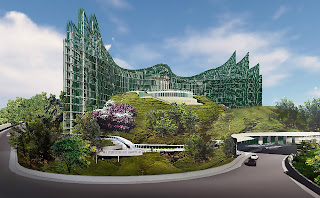 The abstract on a 2016 journal article entitled "Nusantara: History of a Concept" in the Journal of the Malaysian Branch of the Royal Asiatic Society opened with the words:

The dictionary meaning of ‘Nusantara’ is ‘Indonesia’ (in Indonesia) and ‘Malay World’ (in Malaysia), but different meanings have been attached to the concept throughout Southeast Asian history. It appears in fourteenth-century Javanese texts but largely disappeared from written materials for a time, and surfaced again when its almost magical qualities were (re)discovered in the late twentieth century. The meaning of the term has changed over time.

Now that Indonesia have announced the name for their new capital on Kalimantan Island as Nusantara, more likely than not, the Indonesian meaning will prevail.

Will Indonesia take ownership as the new capital of the Malay world?

According to Wikipedia here, Nusantara has different meaning to Indonesia than Malaysia and it has evolved over time. : 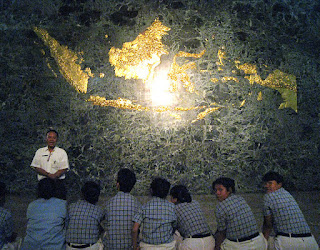 Nusantara is the Indonesian name of Maritime Southeast Asia (or parts of it). It is an Old Javanese term which literally means "outer islands". In Indonesia, it is generally taken to mean the Indonesian Archipelago.

In Malay world, the term has been adopted to mean the Malay archipelago.

The word Nusantara is taken from an oath by Gajah Mada in 1336, as written in the Old Javanese Pararaton and Nagarakretagama.

Gajah Mada was a powerful military leader and prime minister of Majapahit credited with bringing the empire to its peak of glory. Gajah Mada delivered an oath called Sumpah Palapa, in which he vowed not to eat any food containing spices until he had conquered all of Nusantara under the glory of Majapahit.

The concept of Nusantara as a unified region was not invented by Gajah Mada in 1336. The term Nusantara was first used by Kertanegara of Singhasari in Mula Malurung inscription dated 1255.

Furthermore in 1275, the term Cakravala Mandala Dvipantara was used by him to describe the aspiration of united Southeast Asian archipelago under Singhasari and marked the beginning of his efforts to achieve it.

Dvipantara is a Sanskrit word for the "islands in between", making it a synonym to Nusantara as both dvipa and nusa mean "island". Kertanegara envisioned the union of Southeast Asian maritime kingdoms and polities under Singhasari as a bulwark against the rise of the expansionist Mongol-led Yuan dynasty of China.

Nusantara is an Old Javanese word which appears in the Pararaton manuscript. In Javanese, Nusantara is derived from nūsa 'island' and antara, 'between'. It means "outer islands" or "other islands" (in the sense of "islands beyond Java in between the Indian and Pacific Oceans"), referring to the islands outside of Java under hegemony of the Majapahit Empire. The term is commonly erroneously translated as "archipelago" in modern times.

Based on the Majapahit concept of state, the monarch had power over three areas:

Negara Agung, or the Grand State – the core realm of the kingdom where Majapahit formed before becoming an empire. This included the capital city and the surrounding areas where the king effectively exercised his government: the area in and around royal capital of Trowulan, port of Canggu and sections of Brantas River valley near the capital, as well as the mountainous areas south and southwest of the capital, all the way to the Pananggungan and Arjuno-Welirang peaks. The Brantas river valley corridor, connecting the Majapahit Trowulan area to Canggu and the estuarine areas in Kahuripan (Sidoarjo) and Hujung Galuh (Surabaya), is also considered to be part of Negara Agung.

Mancanegara, the areas surrounding Negara Agung – this traditionally referred to the Majapahit provinces of East and Central Java ruled by the Bhres (dukes), the king's close relatives. This included the rest of Java as well as Madura and Bali. These areas were directly influenced by Majapahit court culture and obliged to pay annual tributes; their rulers might have been directly related to, allied with, and/or intermarried with the Majapahit royal family. Majapahit officials and officers were stationed in these places to regulate their foreign trade activities and collect taxes, but beyond this mancanegara provinces enjoyed substantial autonomy in internal affairs.

In later periods, overseas provinces which had adopted Javanese culture or possessed significant trading importance were also considered mancanegara. The ruler of these provinces was either a willing vassal of the Majapahit king or a regent appointed by the king to rule the region. These realms included Dharmasraya, Pagaruyung, Lampung and Palembang in Sumatra.

Nusantara, areas which did not reflect Javanese culture, but were included as colonies which had to pay annual tribute. This included the vassal kingdoms and colonies in Malay Peninsula, Borneo, Lesser Sunda Islands, Sulawesi, Maluku, and Sulu archipelago. These regions enjoyed substantial autonomy and internal freedom, and Majapahit officials and military officers were not necessarily stationed there; however, any challenges to Majapahit oversight might have drawn a severe response.

Nusantara concept in the 20th century

In 1920, Ernest Francois Eugene Douwes Dekker (1879–1950), also known as Setiabudi, proposed Nusantara as a name for the independent country of Indonesia which did not contain any words etymologically related to the name of India or the Indies.[12] This is the first instance of the term Nusantara appearing after it had been written into Pararaton manuscript.

The definition of Nusantara introduced by Setiabudi is different from the 14th century definition of the term. During the Majapahit era, Nusantara described vassal areas that had been conquered. Setiabudi defined Nusantara as all the Indonesian regions from Sabang to Merauke, without the aggressive connotations of its former imperial usage. 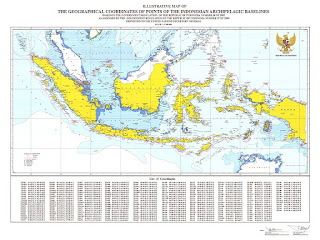 Today in Indonesian, Nusantara is synonymous with the Indonesian archipelago or the national territory of Indonesia.

In this sense, the term Nusantara excludes Malaysia, Singapore, Brunei, East Timor, and the Philippines. In 1967, it has transformed into the concept of Wawasan Nusantara or "archipelagic outlook", which regards the archipelagic realm of Indonesia, the islands and seas surrounding them, as a single unity of several aspects, mainly socio-cultural, language, as well as political, economic, security and defensive unity.

Nusantara is also proposed by President of Indonesia Joko Widodo to be used as the name of the new future capital of Indonesia.

In Brunei, Malaysia, and Singapore the term is generally used to refer to the Malay archipelago or the Malay realm (Malay: Alam Melayu) which includes those countries.

In a more scholarly manner without national borders, Nusantara in a modern language usage "refers to the sphere of influence of the Austronesian-related cultural and linguistic islands that comprise Indonesia, Malaysia, Singapore, the southernmost part of Thailand, the Philippines, Brunei, East Timor and perhaps even Taiwan, but it does not involve the areas of Papua New Guinea." 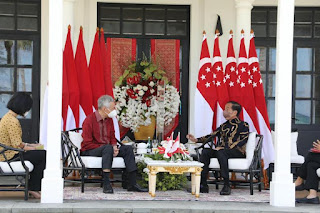 There are critics to the FIR arrangements made by Indonesia favour Singapore (read here and here), but for Indonesia, they have taken charge of the FIR for Natuna and other Riau Islands from Singapore

Looking at the big plans by Indonesia, they plan to build infrastructure such as the port bigger at Kota Tanjung near Medan than the port for Jakarta in Tg Periok plus a bigger port at Batam, Riau Islands.

Where Kuala Lumpur is still politicking over ECRL and HSR routes, Jakarta is looking at Kualanamu Airport for North Sumatra with an ambition to challenge Changi and KLIA.

Indonesia has the potential hinterland for economic activities and population to takeover the role from Malaysia and Singapore.

The meeting in Bentan can be symbolic and interpreted in far greater meaning.

Under Jokowi, he has plans for infrastructure investment in roads, toll roads, ports, airports railways, water, and power plants to support and sustain economic growth. [Read a 2019 report here]

The Indonesian economy has bounced back to pre-pandemic level and of significance, will take over the Presidency of the G20 economies.

Indonesia is being dubbed by foreign analyst as the "quite rise of a future superpower".

It is partly propelled by Jokowi's rise as Indonesia's second democratic transition and China's rise has given them the reason to develop military teeth.

Malaysia is too small and still grappling with the Mahathir's devastation.

Naturally, Kalimantan's Nusantara could potentially be the new capital for the Malay world albeit with Javanese as the dominant Malay sub-ethnic or perhaps Malay as Javanese sub-ethnic.

The Sawo Matang skin is on the rise to dominance. Many Indon foreign have gone back since Jokowi's Presidency. They are improving in many ways even during the pandemic.

We can not rely on a cheap labor economy. Malaysia is of strategic importance to many MNC, most have already upgraded with innovation and technology. They feel the effect of political uncertainties and flip-flop policies.

Let's move forward, please buck up or drop out.