House Behind A House (II): Could There Be 3 Houses in Mosman Park, Perth? 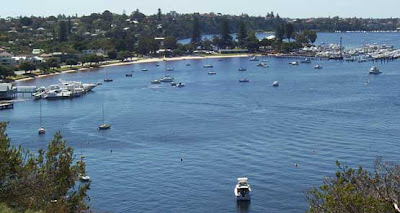 There is a house behind a house. There is a story behind a story. The story is now big. It hit big because Tun Dr Mahathir made an apology yesterday for revealing wrong information on the alleged Prime Minister Abdullah’s house in Perth.

He was replying to the revelation by Raja Petra Kamaruddin of the ownership and market price of the house during a Press Conference after his keynote speech at the “Media and National Development” forum held at the Perdana Global Leadership Foundation, Putrajaya on Wednesday, April 18th, 2007. Both he and Khairy made a wrong remark.

My phone was ringing. I hate being disturbed this early morning while surfing and reading through my favourite SOPO Blogs and doing minor up-date of my new blog, SOPO Sentral of Malaysia (Refer here).

“Hello, Pak “Tak-Mahu-Dengar-Fitnah” (TMDF) here.” I bet he’s gonna ask about Tun and the Perth house. “I saw on TV3 Evening News last night that Tun Mahathir apologised to Pak Lah for accusing he owns a RM60 million house in Perth. What do you say of that?”

“Yes, he apologised. That’s right.” I answered. “The fact and proof are all there. Why not apologise? It’s the only gentlemen thing to do.”

“I am sure them spin doctor will have a field day spinning news on his apology as though he apologised to Pak Lah. We know how Pak Lah reacted after their meeting just before Hari Raya as though he was a victim and Brendan was at his venomous best.”

“I am telling you, I know. I’ve been all my life in the newspaper business from the bottom up.”, he bragged.

“Why would they not spin it?” I said logically.

“Even Ali Ketam is already doing his “nasi tambah”. I meant it to be Dato’ Ali Rastam, the Melaka Chief Minister. It was reported in mStar, he claimed UMNO grass roots is not listening to Tun’s rambling any more and the level of loyalty now is very high. High level means no more questioning from the ground. That is his measure of loyalty, blind loyalty. Odah reported it (Refer here)”

“Ali Rastam is not quite smart." Pak TMDF went on. "He is typical of Pak Lah’s boys, mediocre. They tend to believe they are the saviour and fighter for the Malay race. All "semangat" with no depth. The irony of it is that they celebrate their mediocrity. I heard this description from one Prof whilst having lunch at Golok.”

“One online political forum described it as "Celebritum de Mediocratis". No wonder Pak Lah had to rely on the friends of his son-in-law. Anyway, I don’t want to know what you and that Prof are doing at Golok but I’ll tell you another irony.” I said as I carve out a smile wondering what is he doing with a Prof in Golok. But I wouldn’t accuse him of being naughty. 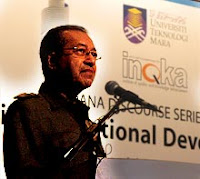 “I would sense that he said something about news spin yesterday,” Pak TMDF made a guess refusing to talk anymore of Golok.

“Yes, indeed. Tun was saying in his speech that spinning paint an untrue picture of better or bigger than it actually is. This would result in wrong decision by the people and leaders and lead to detrimental effect to the country.”

“Whatever he used to say, when he was PM, he claims to have read comments from all angles in any issue. He refuse to let spin doctors do his work because he rather do it himself. Now he got spinned.” I sincerely believed because he is known for being a well read PM.

“Yes, I remember that. Ku Li has a habit of occasionally turning over-confidence and shooting his mouth.” I said.

“That time someone in Berita Harian had a field day doing a spin on it. I can't remember who but the guy really made a career of himself after that.” Pak TMDF disclosing but disclosing any more.

“I guess any politician would take advantage of it. We in the paper were reporting.” He camouflaged his confession.

“Sure, you are. That must be interesting time, isn’t it?” I remarked. “Its not quite now. Tun described a documentary on Hitler he watched on TV. Hitler’s mistress, Eva Braun refused to highlight a mistake of Hitler’s and excused it as "But he is the Fuhrer."

“Its scary when he inferred the current situation at its worst could turn into Hitler’s days, where even the intelligent Germans turned stupid and abide blindly to a mad man. Off course, the muscle of the Boys of Hitler goons and Gestapo was at work to make the defiant obey.”

“Coming back to the house story, Tun’s closing words were “Tapi saya gembira kerana orang mengambil perhatian kepada apa yang saya cakap.” I think the ole man allowed it to get spinned. The reporters could be willing accomplice for they had long wanted to write a story about the house in Perth but was suppressed by 4th Floor Boys.”

Pak TMDF agreed. “He's an ‘ole pro in the media game. Never underestimate him. Those boys are quite predictable. Is there anything more that is not known to the public?”

“Well, I received an e-mail from somebody containing a list of property transaction at the Monmon Park, Perth area. It came quite timely because I have heard for quite a while that Pak Lah and family have 3 houses close to one another.” 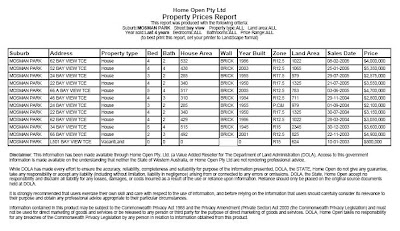 “In addition to Khairy’s claim of it being Kamaluddin’s, there were others rumours that the house in Perth belongs to the Ambak’s, his late wife’s family, and even his brother, Dato’ Ibrahim.” I added.

Pak TMDF, “How sure is your rumour?”

“Well it is rumours that need investigation.” I said. It came from someone very reliable at getting and checking out information. I can’t tell him more, so I gave a different angle to him.

“I have all along known that Dato’ Ibrahim, his food technologist brother, has plans for a Nasi Kandar stall chain overseas and he has been regularly visiting Australia since he delisted Dewina Berhad in early 2000s. The MAS Catering takeover wasn't easy to secure financing.”

“Dato’ Berahim is fairly straight forward. He is a genuine businessman, who left his lecturing job at UPM. His home is fairly modest in Bangi, and you’d have to pass through low cost flats. I doubt that he would buy such luxurious homes.”

“People can change”, Pak TMDF said a matter a factly. “His daughters studied in Australia and they are shareholders in the Restoren Puteri Nasi Kandar”

“You probably right but I couldn't judge so when I met him." I replied somewhat defensive.

"Inside sources said Dewina fell from grace when Kamaluddin was Managing Director. He caused the cancellation of a UPM’s contract, had a hand to divert a contract with a British outlet chain somehere else, and they suspect he dabbled heavily in the Second Board run of '95.”

"Kamaluddin is shrewd, really shrewd. He is in together but only his partner BSA Tahir is in with an ISA rap on the nuclear centrifuge case, just prior to the General Election 2004. Why would Sang Kelembai vehemently vouch that the brain behind all this manouvre is Kamaluddin and not so much as Khairy."

“Shrewd in-a-hurry young people have a craving for the highlife.” I remark.

“He has his own private jet now”, Pak TMDF agreed. “He is likely to own a house in Perth. Khairy haven’t response yet and now he must response. I bet he is figuring a response that would not blow things further open."

“From the list that I received in the e-mail, there were 8 transactions made from 2003 to early 2006 on Bayview TCE, Monman Park. That is the road next to the park with a beautiful view of Swan River."

“Wonder whether it is a transfer of name.” Pak TMDF enquired.

“That could be like acquiring your next door neighbour.” He opined.

“There is also transaction for No. 46 and 52 in November 2004 and January 2006, respectively. One vacant lot changed hand on January 2003.” I completed my description of the Property Report.

“Its highly suspicious but our accusation must be based on fact than guesswork. Whatever it is, I’m looking forward to hear Khairy’s response not that its in all the major newspaper. Dato Patrick Lim’s press response would be great.”

“I agree." Pak TMDF concur to wait for Khairy's response.

"For a high end neighbourhood, its property market is strangely active. This is the great thing overseas. Information is readily available and corruption can be investigated by any Tom, Dick and Harry.”

“The problem with this country is that information is so difficult to get and it’s a very long tedious process. Like my recent visit to the land office recently. We should ...” Here we go again.

“I’m sorry I got to cut you off, Pak TMDF. I’m bit late now for I’ve got an early appointment at 10.30 p.m.” A white lie to get away from his rambling. Well, one day I have to tolerate and give him the chance to ramble anyway. I should hear his stories and experiances.

Yes ,there story is getting 'spooky' with each statement made about it.I don't think Kahiary will issue any remark about the house.Not with all the jokes in Ijok going on.That is his top priority.Infact Ijok's heat might eat up the Perth mansion.But the bloggers exposure of it must contuinue.And facts to back it up.
As for TMDF's visit to Golok,me think he is for his budu supply.

Does the story have any sequels? Would love to read it. Although we had our differences, I can see some similarities. Sidebar youtube perhaps? hehe.. cool picture id

The above (source: yahoo sg - I hope the table aligns nicely; column 1 is date, column 2 is closing price and column 3 is volume) is the market reaction since Equine Capital is linked to the infamous property in Perth.

For now, a politically-connected firm is sexy in the eyes of investors. If one invests RM10,000 on EQUINE on 10 April 2007, in slightly more than one week, the investment is now worth about RM15,000. A holding gain of 50 percent! Not bad at all when during the same period the KLCI climbed only marginally from 1306 to 1328. Some lucky investors do make hay while the sun shines … and the sun shines brightly in Malaysia, as Nuraina has predicted. But the sun can also be the best disinfectant, lest we forget.

As for the non market reaction, some quarters are shamelessly milking the most out of it. But we shall see who will ultimately make the most capital. The jury is still out on it.

Safe bet for you to invest ...

Equinine, YTL, EC Libra Avenue, Pantai, any thing Scomi even if it Score Me, anything Kalimullah even if it is a Company owning HIghland Tower...

But remember, these are shares climbing on the wall of fear.

All in All,
tis' just another brick in the wall!

scomi - score me or scold me?
aMiR

I have nominated you for the Thinking Blogger Award. Pls refer to Rocky's Bru and Nuraina's for the rules.