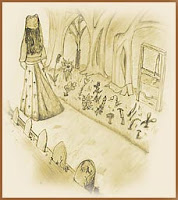 Remember your English nursery rhymes? This is one I learned in kindergarten.

Mary Mary quite contrary,
How does your garden grow?
With silver bells and cockle shells
And pretty maids all in a row.

The nursery rhyme asked to be read in contrary.

Its not about some sweet country girl named Mary, but about the beheaded Mary Tudor. The garden is not a flower garden. Silver bells, cockle shells and pretty maids are not flowers.

Read about it here. Its gruesome.

I’ve made up my own version:

Khairy, Khairy, quite contrary,
How does your politics grow?
With Nori belle and ECM Libra debacle
And monkey callings all in a row.

Khairy called bloggers as monkeys. How amusing? In this phase of Internet with Google and Blogs, all it take is to recall back the accounts of the past. We will see how to the contrary he is.

He seemed open minded, calm and articulated well the issue of blogging when Joceline Tan interviewed him early this year. His comments in Joceline Tan’s April 19th, 2007 column in The Star entitled “Much Ado Over Blogging" is retrieved below:

Said Umno Youth deputy chief Khairy Jamaluddin: “I don't think we should over-react or generalise because there are many types of bloggers and the majority are just blogging their personal experiences.”

But, he said, the unsubstantiated and anonymous nature of discussion, particularly in media blogs, is of concern.

“Take the more popular media blogs: there are all kinds of crazy allegations out there. If there is to be credibility in blogs, then you have to address these issues,” he said.

For much of 2006, Khairy was the subject of some the more bizarre and outrageous stories on the Internet. He has not bothered to sue, preferring to “live and let live.”

But that does not mean he does not believe in legal recourse when it comes to defamation.

“Some politicians react with clampdown calls but blogs are here to stay and they (bloggers) have to be responsible. They shouldn't complain if they're taken to court because, like everyone else, they're subject to the same rules of libel. People at the receiving end must have legal recourse and it's ridiculous to say that the state is coming down on you,” he said.

It sounds fair and square. You break the law and they’ll get you.

But my oh my, have we changed in three months. The latest from Khairy as per Bernama report entitled “Bloggers who slander must be brought to book, says Khairy” dated July 29th below:

He said these bloggers did not think about the sensitivities of others and the repercussions their writings can cause.

"There are no laws in the cyberworld except for the law of the jungle. As such, action must be taken so that the "monkeys" behave," he told reporters after opening the Papar, Kimanis and Sipitang Umno Youth annual delegates conference here today.

Khairy said there were some bloggers who thought they were above the law.

He said this when asked about Malaysia-Today webmaster Raja Petra Kamarudin being called by the police for alleged seditious comments posted on it.

Khairy added that he too had been slandered on websites but had yet to take legal action because the case might take a long time to be settled.

I pity Khairy. He was born in Kuwait and spent most of his life overseas.
With your limited vocabulary of Malay, is “monyet” the only description you know to dish out insults, Khairy?

This is not the first time.

In August 5th, 2006 during the rounds of Pemuda UMNO Division meetings, you called those spreading malicious lies as “monyet”.

It about the same time with the controversies surrounding ECM Libra-Avenue, Pantai-Parkway, and Johor Bridge.

All those remarks last year was meant towards Tun Dr Mahathir for his allegation and accusation towards Khairy and his father in law. Tun has proofs but he seek for exemption under the Official Secrets Act (OSA).

How about it? Would Khairy dare to advise Father in Law to grant Tun the exemptions? Or he prefers the cheap name calling and character assasination?

I persoanally believe you are corrupt, Khairy!

I know one very well. He bought into ECM Libra and within months ECM Libra took over Avenue Asset at deflated price from Government to enable the group to maintain control. He used the Minister of Finance office and threatened the Securities Commission officials.

Why did Khairy sold his shares last year? Guilty? If as he claimed to be "putih seputihnya", why did he used Dato Shahril Samad to manipulate PAC enquiry to shield him and his "Singapore Agent partner"? Conveniently, Kalimullah made a public apology to Dato Shahril in NST, before the enquiry.

In the Pantai-Parkway deal where Khairy's allegedly had a hand, why did Khazanah sanitized the route for Parkway to take a 51% majority control? Yet, the Hospital now run by Singaporeans?
Father in law and the cabinet has yet to answer all the issues Tun Dr Mahathir has raised on the Johor Bridge, New Straits Times, Proton, WPI and many more. With all the development in the various venture and diplomacy with Singapore, is it not obvious that father in law, his cronies and Khairy are in-cohort with the Singaporeans. Now it seems Khairy is friendly with the Singaporean, how about proving us wrong that being friendly with Singaporeans can be beneficial? Raise the water price to Singapore! Solve the CPF and Pulau Batu Putih issues!? Lets not forget KTM Land at Tanjung Pagar!
Come out with it and answer.
Whatever it is, I hope you figure out properly what animal you wish to call us bloggers, Khairy – monkey, or baboon or bear.

Look at the resemblance below, would this make him learn to ponder before speaking? 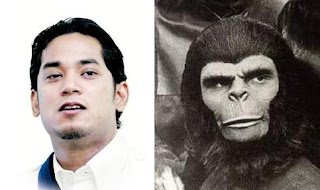 Coming back to the remarks he made in April. How did he address the issues if there is credibility? By name calling of animals like monkey, baboon or bear? Still leaving the issues unanswered?

Khairy said bloggers are subject to the same rules of libel. Go ahead take whoever is libelous to court – be it here or abroad. Why the need to use the police, politicians and media to apply the OSA, and ISA to protect himself?

There is one animal that describe you well, Khairy - thats chicken.

If he is no chicken, let see if he dare to stand as a Pemuda UMNO Chief contested, without all those dirty trick to block the other candidate.

Chicken has no balls. I am sure he knows he is not liked. Even after much harrassment, the motion for vote of no confidence against him at his own UMNO Rembau Division was only defeated by one vote.

He kept quiet and suppressed any voices within Pemuda UMNO on many issues pertaining teh interest of the people and nation.

When Lee Kuan Yew made his disparaging remarks, did you answered back? What about all those attacks on NEP? What about all those projects that does not balance the interest of the Malay and rest of Malaysians, and the nation? When Tun Abdul Razak was accused by Dr Kua Kia Soong's May 13 book, I did not hear a squeak from Khairy. He attacked MCA and Gerakan, but dare not face them.

How about using the mirror when you comb, Khairy? At least you will get to see your own face transforming into a chicken or an ape.

Khairy, Khairy, Quite Contrary,
How does your bank account grow?
with pa-in-law, and Nuri -loh
and the planted fourth floor boys

hello brother! how can the servant talks back to the master? i expect Khinzir Jantan to bow his head all the time in the presence of KY. he wont dare look up and meet the master in the eye. which is why dad-in-law won't bitch about the MM, either.

chicken, eh? i won't call him that. i like chicken. khinzir jantan suits him. najis. and the initials fit.

I notice KJ, king of the jungle, has a small turf of hair in his chin. If he is not careful and still insists on his antics of calling bloggers monkeys, he would surely end up with hair all about his face and he will end up as the MONKEY.

It's a great insult to the monkey family by comparing KJ and monkey!

Bro', enjoyed this one!

So looks like they've upped their game, eh? Making "lists of undesirables" and all that stupid stuff?

i've also blogged about this ape.

come every one, let us prevent this Oxford monkey from achieving his dream of becoming Malaysian PM!!!

Curry, Curry you chicken shit look who is coming for you. 7th day of the 7th moon of the chinese calender. The devil takes its own.

Good analogy & fitting, reminded me of the fact that ONLY CHICKEN EATS ITS OWN SHIT... one of a kind indeed!

Awww, bro. I liked that movie.

Charleston Heston would be extremely distressed being associated with KJ.

Ok, Khinzir Jantan makes up for it.

How about 'A little monkey in a ferrari in a hurry' and we get Mob to a poster?

what do you get when you mix the genes of chicken and an ape? help any biotechies?

This insult will be responded to!
I wont dignify this blog with my response. You will read it on the Rembau Times.

Opulently I to but I contemplate the list inform should have more info then it has.

Sorry for my bad english. Thank you so much for your good post. Your post helped me in my college assignment, If you can provide me more details please email me.