Khairy Must First Give “Penerangan” On ECM Libra-Avenue Merger (I) 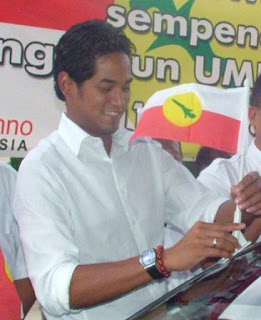 Khairy in his usual topsy turvy
This Saturday August 18th, 2007, Khairy & Azalina is expected to hold a “Penerangan” session at PWTC for UMNO members on Bloggers. The session is likely to provide them a background on Blogging, their perspective of Blogging, and seeking support to take on Bloggers.

To date, their handling of Bloggers have been negative and it has backfired. The more the bloggers are cursed and harrassed, it adds to public curiosity and more realised the ability of Bloggers to break-in news and provide interesting perspective of events. Hopefully, they realise that the most impactful approach is to effectively articulate and explain the ruling party’s point-of-view than the childish manner their cyber boo boo are engaging bloggers.

Khairy, described in Joceline Tan’s boo boo as the true political son of Tun Dr Mahathir and the happening, is the appropriate person to speak. He has a lot of explanation to do. He certainly should explain first his personal participation in ECM Libra Berhad (ECM), which was conveniently timed few months prior to the Company’s takeover of Avenue Asset Berhad (Avenue).

Avenue is a Public Listed Company controlled by Aroma Teraju (29.5%), a Company owned by MOF Incorporated and Bank Simpanan Nasional. Its other major shareholder are Pantai Holdings Berhad (16.7%).

Avenue would purchase the subsidiaries of ECM to be paid by the issuance of new shares in a newly created Avenue entity called Avenue International Capital Berhad (AICB). Through a series of event and procedures, ECM has taken management control of the merged entity with Avenue called ECM Libra - Avenue (ECMLA). Aroma Teraju Sdn Bhd would be reduced to 15%, shareholders of ECM control 53%, and Dato Kalimullah, Lim Kian Onn, and David Chua assume control with 22% of ECMLA.

Minority shareholders that attended the Avenue EGM on May 18th, 2006 questioned on issues pertaining to the Merger. The response was non-committal and the Board of Directors just wants to getover to proceed. Two resolutions were brought to the EGM that sought approval from the shareholders - Resolution I was approval for the proposed merger with ECM Libra and Resolution II to waive the Mandatory General Offer (MGO) to Minority Shareholders of ECM. Authorities allowed the interested major shareholders to vote and the Minority Shareholders were out voted.

As a GLC under the control of MOF Inc. and BSN, Avenue major shareholders easily gave management control to the triumvirate of Kalimullah, Lim Kian Onn and David Chua. It is strange for them to not demand for MGO for more value from the acquiring ECM party. Why did the major shareholders vote for the Merger when they are getting a bad deal and would lose control?

1. Avenue “written-off” some RM 250 million goodwill and another RM20 million in the 2004 and 2005 Annual Accounts, respectively. ECM conveniently did not write-off its RM 360 million goodwill. This justify the artificially inflated valuation of ECM Libra Bhd by about RM630. This discrepencies was raised by the Minority Shareholders Watchdog Group (MSWG) representative, Encik Wahab at the EGM and was reported by the Press.

2. The price to fix the value of ECM is the use of last done price of ECM shares, prior to suspension of trading on January 17th, 2006. The price was fixed at the spiked price of RM1.06. The shows a volume and price build up since end December 2005! This is a market rigging act that is a crime under the Securities Industry Act 1984. The overvalue by 30 sen per shares for 433 million shares inflated ECM valuation by about RM130 million. A much fair price fixing practise is the use of average price. However, it is not advantageous to ECM.

3. The purchase of ECM Libra subsidiaries is transacted by issuing of new shares in Avenue priced at RM0.66 per share. This is a gross undervaluation since the documents shows the Net Tangible Asset of Avenue is RM 0.88 per share and its projected value is worth at its par value of RM1.00 per share. This allowed ECM shareholders to hold about 53% shares in AICB. If the shares were rightly priced at RM1.00, they could get only 40% of the merged entity of AICB. In a takeover exercise, there should be a MGO to shareholders as option to exit the Company at a more enticing higher price than the current market share price.

4. It is odd and irregular to appoint another stockbroker, K&N Kenanga as an Independent Adviser. The usual credible practise is have Merchant Bank or established Audit firms to act as one. There were several discrepencies and questionable practices by K&N Kenanga.

They justified the improper comparative valuation, overly high valuation multiple, and ignoring the fair proforma valuation of AICB. They justified the overvaluation of ECM by making comparison to highly established bank-backed CIMB and Arab Malaysian groups. This is not an “apple with apple” comparison. They deceived the shareholders in endorsing the use of Net Asset and not commonly practised use of Net Tangible Asset as valuation yardstick. They ignored the clearly mentioned value of Avenue of RM1.00 per share stated in the documents and defended the issuance of Avenue shares at a discount.

Clearly, K&N was acting as a rubber stamp to misrepresent fact and convince shareholders the deal as fair and reasonable. The Board members of Avenue as originator of the deal strangely only recommend as “reasonable” but without a “fair” recommendation. Shouldn’t the originator have more intricate knowledge than Adviser?

Or is it because one of the original shareholder of K&N Kenanga and Director is Dato Aziz bin Hashim, who just happen to be a brother to Tan Sri Azman Hashim, the man allegedly said to be behind the scene in this deal?

5. The EGM of Avenue was marred with improper practices. At the start, the Independent Adviser report was not circulated together with the 14-day EGM notice dated May 3rd, 2006. They were only circulated on May 9th, 2006. The Chairman and Directors of Avenue were reluctant to answer ALL the questions raised by the minority shareholders and mostly redirected to K&N Kenanga.

The resolution for a Waiver from a MGO is meant for Independent Shareholders and strangely shareholders deemed as interested party and represented on the Board were allowed to vote by the Securities Commission. Contrary to press report of 99% in favour, both resolutions saw a majority of around 60-70%. There was clearly element of coercion and influence applied to force the institutional and major shareholders to vote despite the unfavourable terms.

Few ECM staff attended the EGM and is tantamount to parties related with ECM bought shares in Avenue and participated in the EGM and its voting proceedings. One notably visible was one Director of ECM, namely; Mr. Lim Boon Soon, their Chief Financial Officer was there in the capacity as a proxy.

6. With so much noticeable indiscretion and poor judgment in much aspect of this Merger, all the authorities have not acted accordingly. The authorities, particularly SC, have given the Merger too many concessions at the expense of the rakyat’s interest under trusteeship of MOF Inc., small people’s savings at BSN and the minority shareholders.

Shareholders wrote to all relevant authorities prior to the EGM alerting of these discrepancies – SC, Bursa, EPU and Minister of Finance II; Board of Directors of Avenue; and Avenue’s Auditor. No action was taken and EGM proceeded. There were police reports made by shareholders but since SC would be referred to, no action has been taken.

Privatisation of Government related Companies should undergo due process at EPU and receive cabinet approvals but non were seeked. Ministry of Finance single handedly approved it. Government willingly gave management control of a well run company and allowed the takeover without any capital outlay.

All the Directors were instructed to vote in favour of the Merger despite the lop-sided valuation. The indicator is the unstated “fair and reasonable” but merely “reasonable” recommendation in the document. Avenue’s Chairman and CEO resigned in protest and not stayed for the conclusion of this Merger.

Lets hope Khairy will not do a Mat Taib style reply of “ini cerita lama” because it is not yet two years. He should be fair to give his cybertrooper recruits a decent answer to explain or they’ll get “tarred with feathers” out of blogosphere.

As a wunderboy Investment Banker at ECM Libra, despite no job experience in Investment Banking or Securities but mere short stinct as cub reporter of The Economist, Khairy can’t deflect answer as saying he sold his shares at a loss. Lets not play sympathy game and use cheap spin. Since his resignation from ECM, he has no jobs, yet he own several expensive cars, travels in a heli, used an iPhone, and his mother is said to rebuild a few million home in a posh neighbourhood to new palatial home.

Sure, he sold the merged ECMLA shares but he still own the ECM Libra Berhad shares that is now a Sendirian Berhad company. What happen to that Company? Any change of name? What business is it in now?

He is expected to justify by saying that he is not a substantial shareholder of more than 5%, thus he is not required to disclose his transaction. He sold his shares to David Lim and Dato Kalimullah, which later sold down to Tan Sri Azman. Is it to maintain management control? That indicates Khairy as an interested party and working in concert!

He would conveniently try to absolved himself by claiming that the Dato Shahril-chaired and staged Parlimentary Accounts Committee (PAC) cleared the SC, Treasury and the Minister of Finance. Tun Dr Mahathir cynically said at Putrajaya today against the present administration's habit of accepting any words as accepted truth.
To know why SC and MoF was not actually cleared, wait for the sequel to this posting for details of the infringements.
at 8/16/2007 12:05:00 AM

For the next 5o years,I dreamt of Malaysia as Cameleot of the East, with young Prime Minister to lead the country to a new height. She will be more prosperous than Singapore, more technologically and socially advanced than Singapore. Question,who will be the PM?

anon 1:10 am (hereon will be the last anononymous posting)

I share your dream and I agree. Prime Minister AAB is no more young.

I agree with u. I Keep reminding the people that this guy is accountable. Make sure KJ remembers that us Malaysian public are not "mudah lupa".