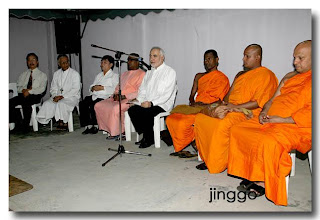 Sunday night, September 8th was a fine demonstration of multi-faith solidarity through Multifaith prayers held for Tun Dr Mahathir at the Blog House. When announced on Rocky Bru’s blog here, there were few Muslims expressing reservation out of fear such an act is deemed syirik or heretic.

It is a common reaction for Muslims to address uncertain area in their practise with tawhid or faith implication by avoiding it. For the unfamiliar, heresy, apostasy and accomplice to it (subahah) are act most condemned in Islam.

For those non-Muslims sincere in their gesture for Tun, their displeasure to such comments is understandable for it implies as though non-Muslims are insensitive and totally ignorant to the Muslims ways. Perhaps there should have been more diplomacy in expressing ones reservation openly. In the Newtonian world of Internet discussion, every action could sometimes bring about an opposition an equal reaction.

The way it is with religion, each comes with various strains of interpretations and orthodoxy. Its best left to within the realm of the particular faith to determine and even deal with it.

The benefit of doubt must be given to those Muslim taking a conservative stand to refrain from such Multifaith ritual. In the final analysis, the ultimate decision maker in the practise of religion goes to the individual. The long and short of religion is as one commonly said words amongst the Malays, “kubur masing-masing” (meaning every mortal is responsible to their own before the Creator). The individual’s decision should be guided either by knowledge or from learned ones. 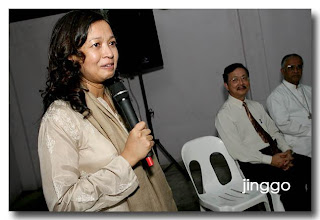 Generally when faced with an unfamiliar situation like Multifaith prayers, one could decide with sufficient confidence in ones own knowledge and understanding. Most important in one decision to join is that ones intention must be clear.

One Mufti (contrary to the opinion of some quarter of the public of him) is very much involved in interfaith dialogues abroad. In one dialogue in Europe, he was offered to lead prayers for world peace, while others follow and later rotated to be led by other, while he follows. While he agreed to the performance of such prayers, he declined to the proposed arrangement for it is heretic for him to follow the prayers rituals of others. Finally its agreed that each perform their own prayers in their own ways with a common purpose.

That is exactly what was practise at Blog House. The Muslims perform their regular Maghrib prayers and followed by 'doa' lead by the Imam. They later joined the others outside the premise to observe the prayers perform by the other faith. This is a similar to the act of Prophet Muhammad to stand to give respect to a Jewish death procession ritual.

For the comfort of the unfamiliar, the Imam, Dr Feisal Abdul Rauf is no stranger to Malaysia. He was raised here and studied at St. John Institution, Kuala Lumpur. His father was the late Egyptian Professor Abdul Rauf, the man who established Kolej Islam, Klang and later called again to be the first Rector for International Islamic University of Malaysia. Dr Feisal is involved in the interfaith Cordoba Initiative (press here) to build understanding of Islam in the West. One notable person involved in the Cordoba Initiative is Karen Armstrong.

Before the performance of the Maghrib prayers, one of the organiser requested one Muslim Blogger to perform the call for prayers or azan. Earlier he was seen busy preparing the area area for Muslims to pray. Unlike the complain one regular hear of the azan, the attitude by that organiser, who happens to be a Christian, was indeed a great gesture in interfaith respect and understanding on the Muslim ways. 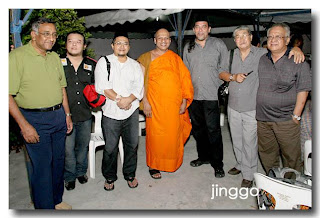 What matters most in interfaith interaction is a common respect for the right and manner of others to practise their own religion. The common act to condemn and ridicule other faith is not conducive to such spirit. Nevertheless, freedom to practise religion should be made without any imposition unto others, encroachment beyond ones faith, and within reasonable limit of practical considerations.

As advocated before by this Blogger, the solution to societal problems is best left to society to decide. Where the adversarial nature of politics and law failed, the attitude of appreciation and understanding within society is a solution by society itself to interfaith and also interracial issues.
at 9/12/2007 05:02:00 AM

Thank you, A Voice. It is absolutely about niat on the part of everyone. We got together with the niat of giving thanksgiving for my Dad's successful surgery. It is not for me to refuse such good intentions of my non-Muslim brothers and sisters. Instead I accept in good faith, as a good Muslim should do.

Wishing you and everyone Selamat Berpuasa this Ramadan.

this should be a guiding post for all future interfaith activities.

i was touched when the iman wished everybody, muslims and non-muslims, ramadhan the other night. he said the benefits of ramadhan are not confined to the muslims alone.
and his doa makan or grace is now a standard in my daily routine.

What a load of rubbish!

Malaysia is the most terrorist Islamic country in the world.

Singapore is right role-model of a mutli-religous and multi-racial country.

All religions are allowed to be practised and the terrorist religion of Islam is not allowed to broadcast the call to prayer.

Malaysia can only be a truly multi-racial country if Syariah law is abolished...

A Voice: a balanced dissertation relevant to the mood of the event. This is my first experience and the presence of imam brought credibility to the occasion. For the first time, in my memory, Malaysians came together in common prayer for one common cause: prayers for Tun.

Kua Kia: You are free to express yourself anyway you like. It is posturing like yours that widen the rift instead of bridging it. No politicians were invited; no press were alerted. Ordinary Malaysians from all walks of life came together on very short notice and in a place unfamiliar to most, to prayer together. What's so rubbishy about that. We would do the same for you if we know that you needed prayers to help you heal or exorcise the inherent hate that you either inherited or is eating at you. You can pledge allegiance to Singapore but I pledge to live and if I have to die protecting my country, I will. Peace to all men of goodwill and Piss to those who preach hate and disharmony.

Frankly, there was never any doubt on my part that it was a good thing to do.
I could not see what could possibly be wrong with the event.
I am glad I was there.

Bro, this was my first time attending an Inter Faith prayer session.
I have been to a Hindu Temple, Buddhist Temple, to a Mosque and also other Christian Churches.
I cannot accept when someone else tells me that a certain religion is better than the other.

As the Imam said, the coming together of different beliefs for a common good in itself can on better the situation. I was simply awed that his perception is exactly the same as mine, and not what is preached by the Govt and other Muslim groups. To bridge the gap, we MUST accept, not tolerate (as I have just been corrected).

All said, it was a beautiful night, calming, peaceful, and for a common purpose. May TDM recover well and fast.

(I believe the rain avoided our area because of divine intervention....)

Sayang, missed this one bro'. Dah kat Balikpapan nak buat macamana. I think your last paragraph is most inspiring bro': "As advocated before ... the solution to societal problems is best left to society to decide".

I couldn't agree more. We, the rakyat of different race and faith know how to sort ourselves out...

Please check your mailbox, I've sent you an email.

You are right a Voice soem things are difficutl to discuss int eh open, more diplomacy is needed, discuss some things behind closed doors and issue a carefully worded communique
but some people say this is too much like the Government...

Kua Kia
Hitler was Christian he killed mioer than anyone else in the history of the world
So you should suggest that we tear down all churches in Malaysia and we can ask the police to send a team to hunt you down for advocating religious strife... how about that....

P.S we will even ask the police to make sure they have live bullets in their guns.. just for you lah.. you know how we feel about you right....