Just News: Not Acting, Actually Acting and Trying to Act

The Russian described such talk as logical myopia. Remember in Malaysia, when someone used to say why seek for independence when we can't even produce needles to sew. One time ago, there are those that felt Malaysian shouldn't dream of producing their own cars.

This is our first trip up and its not our space craft. Before we run, shouldn't we learn to walk. Do Malaysia proud, Dr Sheikh Muszaphar.

From the perception of acting to actually acting, Dato Tony Fernandez, CEO of Airasia made his first debut as an actor in a cameo appearance in local film production, Cuci. It so happen the film is produced by Fernandes Tune Entertainment Group Sdn Bhd and Hans Tall Order Productions.

Now, he already adopted the red colour scheme and casual style of Virgin Air for Air Asia. Although this is not his first attempt to acting, having potrayed himself as a successful Airline CEO for many years, it will be part of his transformation into a Sir Richard Branson clone. He was, like Branson, from the music industry. Perhasp in a matter of time, he will emulate Branson's stunts like having dinner on top of a floating hot air balloon.

Who are thou shareholder of Tune Air Sdn Bhd? 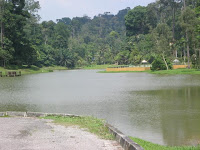 Another variant acting possibility is Tan Sri Mahyuddin. The Agricultural Park in Bukit Cerakah is to be turned into the world's biggest botanical park, National Botanical Garden Shah Alam. It'll take up the size of 817 ha. Cabinet has approved a budget of RM114 million. It is expected to be completed by the 10th Malaysia Plan.

Did I here 10th Malaysia Plan? Yes. These days, everything needs not only long but very long term treatment. The economic corridors spending plans are for 20 years. In 2005, our 5-year Indusrial Master Plan was changed to a 115 year 2005-2020 IMP. Even 2020 Vision has changed into 2057 National Mission.

Such far sighted visionary and anticipative leadership. Far enough to forget that the 800 ha park has lost its biodiversity of flora, fauna and wild animal population built over 20 years since 1986. All to the greed of property developers and their fascination with natural cement and concretes. In June 2005, 118.7 ha of the permanent forest reserve was de-gazetted and 30.4 ha was given to PNSB for mixed development.

A case of trying to act as though nothing happened. But Tan Sri is not to be blame. He is merely solving a problem from the 2005 expose. The launching is in accordance with the plan.

Sorry bro', I understand your sentiment. But pray, tell what exactly is the research that he's undertaking? If you peruse NASA's website each member of Expedition 16 has specific duties (see http://www.nasa.gov/mission_pages/station/expeditions/expedition16/index.html )...

I wish Dr. Muszaphar well, as a Malaysian. But let's just call a spade a spade... It's lucky that he's not called a 'Space Tourist' and NASA was diplomatic enough to call him a Participant. I will, in a forthcoming blog Bro', write about an anak Melayu Johor, a Prof in Nuke Science in US and a scientist with Argonne National Labs. He was school mate in JB in the 70's and might be on the brink of great scientific breakthrough in Nuclear Physics. Unfortunately due to sensitive nature of his work with US Dept of Defense he was forced to take up US citizenship 20 years ago... I mean, this is a REAL towering Malay, not a manufactured one... May even be a candidate for Nobel Prize someday. But sayang he's an American... Stay tuned.

Mat Salo - I read your link here and each of their bio.

Other than the Commander, Peggy William, whose truly a bio chemistry scientist, all have background in aeronautical or aerospace engring, aviation and trained flight engineers. That is the usual case in every expedition.

Peggy was selected as astronaut candidate since 1996 and is commander and flight engineer since this is her second mission. So is one Russian. How long did Sheikh went for astronaut traning? Within that time, we can't expect him to start from learning to fly cesna to outer space flight engineer in months.

The opportunity from the offset program present itself now. Why refuse? Its a faster and cheaper way to quantum leap into space science. We are serious about space science since the last days of TDM. There is two University offering aerospace - UPM and USM and a space centre under Dr mazlan (woman). My sis in law is a doctoral candidate in aerospace.

Before we start saying "Malaysians can't built a car", why did the panel choose a non Enginner and a medical doctor? Is the purpose of sending Sheikh up to acquire flight engineering experiance or something else?

Really, if we look at each of the other astronauts credential, we'll never get one up thru the normal process. We are piggy backing on them and this way we have establish a working relationship.

Remember we can't even determine what role we want? It's not our money they want. They gave us the opportunity!

The first thing I wrote about all this comments is about envy. Will the same criticism and rubbishing apply if a Chinese or Indian or Malay selected? By the way, Sheikh Muszafar is Arab ... :-)

Yes, call the spade a spade, but what card game are we playing?

For Sheikh ... remember this lyric of a song we sing in our teens ... ingatlah perkataan ... tuntut ilmu jangan jemu ...

An astronaut or cosmonaut (Russian) is a person trained by a human spaceflight program to command, pilot, or serve as a crew member of a spacecraft.

Until 2003, astronauts were sponsored and trained exclusively by governments, either by the military, or by civilian space agencies. However, with the first sub-orbital flight of the privately-funded SpaceShipOne in 2004, a new category of astronaut was created: the commercial astronaut. With the rise of space tourism, NASA and the Russian Federal Space Agency agreed to use the term "spaceflight participant" to distinguish those space travelers from astronauts on missions coordinated by those two agencies.

The criteria for what constitutes human spaceflight vary. The Fédération Aéronautique Internationale (FAI) defines spaceflight as any flight over 100 kilometers (62 mi). However, in the United States, professional, military, and commercial astronauts who travel above an altitude of 80 kilometers (50 mi) are awarded astronaut wings.

Pass a strict physical examination, and have a distant visual acuity no greater than 20/50 uncorrected, correctable to 20/20. Blood pressure, while sitting, must be no greater than 140 over 90.

1. Commander and Pilot
Bachelor's degree in engineering, biological science, physical science or mathematics is required, and a graduate degree is desired, although not essential.

At least l,000 hours flying time in jet aircraft, and experience as a test pilot is desirable.

Barbara Morgan, selected as back-up teacher to Christa McAuliffe in 1985, is considered to be the first Educator astronaut by the media, but she trained as a mission specialist.[40]

The Educator Astronaut program is a successor to the Teacher in Space program from the 1980s.

So ... JJ, some answers required. For credibility, Pak Lah himself perhaps? :-)