No need to be defensive, Khairy was ineffective 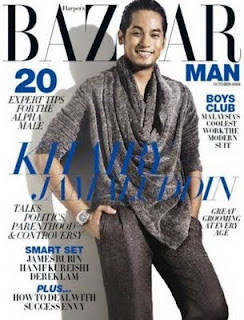 A career awaits Khairy in modelling
Hishamuddin made a statement trying hard to deny there were such call for Khairy's resignation in the eventful Pemuda Exco meeting. Razali Ibrahim made the same denial two days before.

Hishamuddin is no more in Pemuda and is amongst adult as UMNO Vice President. Why the need for such statement? It rings a sound of guilt. It is either he had voted for Khairy in the last Pemuda election. Or Pak Lah's claim that Hishamuddin insisted Khairy be placed as Naib Ketua Pemuda unchallenged, which most believed he lied, is true.

It is pointless for Hishamuddin or Razali to attempt to cover-up. So is the attempted excuse by members of Exco Pemuda UMNO that what transpired in the meeting is official party secret.

Thats all bullshit. Most of what transpired in meetings are seldom known outside before the meeting ended. In fact, one member of the Exco from Kedah claimed it as true.

And also, The Malaysian Insider's attempt to spin a sympathetic tone to the development in Pemuda UMNO is futile.

MI is Kalimullah's news portal and who is not aware of Khairy's close relationship with Khairy. Nice try but MI has never published any critical piece on Khairy!

The undisputed fact is Khairy is ineffective and has not exercise good judgement as leader. As Dr Mahathir described, Malays, if not Malaysians, do not like him.

When Najib called to meet Khairy as Ketua Pemuda, he explained that he will not be appointed Deputy Minister and set him a modest target to unify Pemuda.

But Khairy refused to heed the party President's suggestion. Instead, he went about in a childish selfish way to use his position to fortify his politics.

He should have used the opportunity to appease the factions align with Dato Mukhriz and Dato Dr Khir Toyo. Khairy should have realised that these two factions are rival but friendly and could easily join forces. When combined, they are larger than his faction.

Khairy helicoptered himself into positions in Pemuda UMNO, thus he is not familiar with UMNO culture. There is a way to tame rival factions within UMNO because factions in UMNO are never permanent but change with the political development.

It does not help Khairy's cause by being overzealous in his pursuit for a Ministerial position. It was too obvious that he is using the Pemuda outfit for his personal pursuit when he rallied a Pemuda weekend training session in Janda Baik with the help of Zahid Hamidi for that purpose.

He has been sulking about this. Many Pemuda approching him for fund or proposal of programs is met with negatives. His response was he will not do anything as long as he is not appointed Minister.

Dr Mahathir raised a pertinent point too. It has never occured in UMNO history that a Ketua Pemuda is requested not to participate in a by-election campaign.

Khairy failed to realise that Pemuda is more about party machinery and being vocal and energetic than trying to play adult to dwell on ideology and policy.

His actions to stop Pemuda UMNO from being a pressure group on issues raised the suspect that Khairy is not in tune with the aspirations within UMNO. He has long been suspected as a PKR stooge inside UMNO.

The surprise for the night was when Dato Zaki Zahid himself criticise Khairy for ineffectiveness.

Hahaha.... I like the last para about the "snake".

For God Sake, Please stop the culture of Corporate inbreeding in GLCs. There are still plenty of Malays Corporate Warriors outside PETRONAS that are ready to propel PETRONAS to become top 10 in Fortune 500 within the next decade.