Pemuda stole the Australian protest initiative of Perkasa and Bloggers 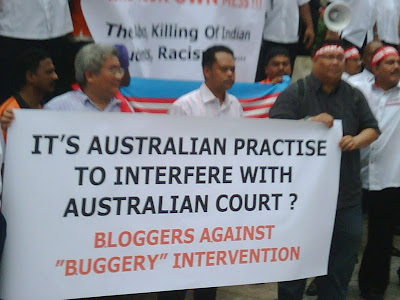 The newspaper and media these evening and tomorrow will show Pemuda UMNO appearing to lead a protest against the 50 Australian MPs demanding the Malaysian Government interfere with our courts to stop the prosecution against Anwar.

Some in the media may have known that Pemuda UMNO stole the protest initiative from Perkasa and a group of bloggers.

Jailani was first to call for such protest on Saturday. He suggested the time of 3:00 pm Wednesday.

Perkasa also had a similar intention and made an announcement. It was reported in The Malaysian Insiders on Sunday that it will be holding a protest Wednesday.

Jailani and Perkasa got in touch with each other and decided to hold it at 10:30 am with Restoren Kampung Pandan at 8:30 am as the rendervous.

Pemuda UMNO came later and only made their intention known on Monday night. They decided to have their protest at 9:30, an hour before the Bloggers and Perkasa's planned.

That is what you call upstaging the earlier organiser.

Out of politeness, Perkasa and Bloggers allowed the desperate-for-attention Pemuda UMNO the space. Kita beralahlah. Perkasa call off their supporters and let Pemuda take the lead.

But despite that, Pemuda UMNO led by Khairy Jamaluddin had no decency and courtesy to offer the originators of the protest be represented into the Australian High Commission.

One would have thought the insult ends there. It did not.

Jailani had given a protest letter signed by all bloggers to a Pemuda representative going in to be handed to the Australian Commssioner. That letter was not handed and Jailani was told off as "tak ada masa."

What a load of crap of an excuse? That is sheer rudeness!

Read Bujai here where he claimed Bloggers were sidelined.

After much had been said in the past of the arrogance of Pemuda UMNO Malaysia and time would have made them more courteous and sensitive to others than themselves, unfortunately it did not. They are still full of themselves.

If the Pemuda UMNO feels the demonstration would help their case in their meeting with the Prime Minister today at 3:00 pm, the PM and UMNO President should take their words with much reservation.

Definately they would like to gloat to Dato Najib of their demonstration today.

The truth to the matter, the demonstration was not really their idea or initiative. The demonstration was made without much thinking. The numbers present by Pemuda was miniscule compared with the numbers opposition are capable of gathering. It could have been easily upstaged by NGOs if they wish to do so.

By participating in the protest, it shows Khairy led Pemuda UMNO lack the political maturity and anticipative ability.

In Michael Danby's letter, he accused of political hands fixing Anwar into a sodomy case. How does it look that the Youth arm of the ruling party were participating in these protest?

Doesn't it help their's and opposition to spin an argument that the ruling party is defending their alleged actions? Dumb! Perhaps Khairy didn't care for that.

The protest should not have been Pemuda UMNO led. Furthermore, the protest is about interference in the affair of our sovereign country.

Most of the Pemuda Exco were talking of Anwar's case and accusing him as peliwat openly. Did they think for awhile what they were thinking off? Or a more relevent, those Pemuda Exco giving speeches know what to talk about? 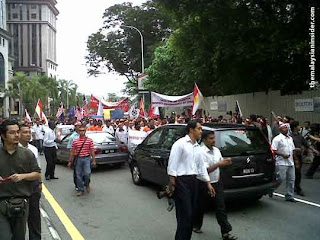 KUALA LUMPUR, Feb 17 — Some 250 people from the Barisan Nasional Youth and Malay rights group Perkasa gathered outside the Australian High Commission here today to protest against 50 Australian MPs who had asked for Datuk Seri Anwar Ibrahim to be freed of his sodomy charge.

The crowd was led by the BN Youth chief Khairy Jamaluddin and his Umno Youth deputy, Datuk Razali Ibrahim, who led a delegation to hand over a protest memorandum to a representative from the mission.

The crowd had earlier gathered at a nearby restaurant some 200 metres from the mission as early as 8.30 am and later marched towards the building carrying placards, banners with “Don’t Mess With Our Affairs!”, “Jaga Negara Sendiri (take care of your own country)” written on it.

As they marched, the crowd shouted “mind, mind, mind your own business” and “to hell with Australia”.

A Light Strike Force squad was deployed to form a barricade and prevent the crowd from gathering at the mission’s outer compound.

Only Khairy, Razali and MIC youth chief T Mohan were allowed to pass through the barricade.

Khairy later told reporters that he had met Australian High Commissioner Penny Williams to hand over the memorandum, which among others, demanded the Australian government to make their stand on the issue clear.

“We also want an open apology from the 50 MPs and we want them to retract the petition,” he said.

“This act is a clear interference with our internal affairs and an encroachment to our sovereignty and we will tolerate none of this,” Khairy added.

The BN and Umno Youth chief said the Australian High Commission had assured him that their government has no intentions of meddling with Malaysia’s affairs and are not prejudging the ongoing Sodomy II trial, a charge Anwar and other opposition leaders claimed is “trumped up” to kill its surging influence.

Khairy, however, slammed the accusations and said he believed the ongoing trial will take place in a transparent and fair manner unlike what is claimed by the opposition.

The former deputy prime minister has denied the charge, the second such charge in 12 years.

Perkasa president and Pasir Mas MP Datuk Ibrahim Ali was less diplomatic when stating his view to reporters outside the Australian High Commission.

Ibrahim said the reason why Michael Danby, the MP who led 49 others to hand in the petition calling for the charge to be dropped, is “supporting” Anwar is because he is a homosexual, a derogatory description leveled against Anwar by his political rivals.

“Birds of a feather flock together. I heard that Danby is a homosexual.”

The BN Back Benchers Club (BNBBC) also sent a separate protest note at 11.15 am.

Bung Mukhtar told reporters that Williams had assured them that the views of Danby and the 49 MPs do not represent the Australian government’s stand.

He also said that the Australian MPs should not be carried away by Anwar’s side of the story. The opposition icon has been vigorously engaging the international media in a bid to woo support.

“The case is not approached by the government but Saiful,” said the Kinabatangan MP.

“Because the case is not broached by the government so how can they ask the judiciary to drop the case?” he added.

Anyway Bujai ... better stop being so nicey nicey and trusting of that boy. He is immature and snakey.

Khairi is fast becoming an overated baggage in UMNO Youth and Ibrahim Ali is political desperado. They will do anything to prove they are still relevent. We will see more of them I am sure.

Kuda Jew is a bloody mother fucker! Next time, do not let him and his followers know what Perkasa is doing.

This brainless mother fucker will surely take advantage to glorify himself again!

Apa lah. benda kecik pun boleh jadi isu. C'mon lah. Look at the bigger picture lah. What's the main purpose of the rally? IS it so much about KJ or what?

You guys are just trying to find fault to blame KJ for everything..

If what you wrote is true then it just shows that Khairy is an accomplish politician and you ...well just a blogger.

why the hell were you holding THAT banner?! lol.

News reported only UMNO, MIC, Makkal Sakti plus some other NGOs participated in the protest. No mentioned of MCA and Gerakan. Wonder why?

I am sure you are a KJ supporter but let me remind you that this is two years after GE 12.

If this is what you call an accomplish politician, Pemuda is behaving and thinking like this is 2003-08.

Playing dirty tricks is no mark of an accomplished politician. It is just others are disinterested in playing such trick.

If this is the way you treat your own allies, Pemuda be making more enemies than friends.

Pemuda will continually be a group of syiok sendiri.

If that is the way Pemuda justify their actions, good luck in GE13. The breaking down of opposition does not guarantee votes for UMNO yet.

Itulah budak2 KJ. They are not listening to the grumbling on the ground just like they were so arrogantly in denial in 2008.

Grow up or Pemuda will be totally irrelevent

Hundreds protest outside the Australian embassy in Malaysia after MPs criticised the sodomy trial of Anwar Ibrahim.

This protest appear to be Malay protest based on the demographic participations and political affiliation. Does it conclusively say such representations show overall Malaysian sentiments. Any junior political science student would say not even close.

Good, it shows how arrogant they are, how stupid they. After all just look at the sentence on the banner. It is supposed to be a question not a statement, thus it should be written "IS IT..." not "IT'S"!

The chief who's supposed to be an oxford ex student doesn't even know this simple grammar!

Dont be a petty English teacher. It was a printer error. The message do come across unless you are too dumb!!!

It is (It's?) like having fresh air to breath out after trapped for hours inside the cave to kjfc's 'lickers'...

We can see inside pro kj's blogs how they attack PK for that.

But how long they can spin this bloody issue to gain kj's merit?

anon 8:50,
the oxford leader was not responsible for that banner, are u KJ-hyperactive? Cant you read 'bloggers against buggery'

Aren;t the bloggers now baying for his blood as if he has committed some cardinal sin?

Wouldn't these bloggers have as much chance as a toad in the princess chronicles in being able to conduct a basic demo, let alone meet an embassy rep?

the pemuda banner was well crafted and straight to the point.

i've been reliably told KJ was there to teach the bloggers how to demo.

OXFORD guy always like that bro, follows Con Con, wants to be there first, always the first, like the Titanic survivors, leap on the head of drown neighbors,oh my, this is the thing about using others people's idea to be ahead, Israelis don't do that, our people can do much better than Israelis, wow, really shock ma....

Ha! I knew it. This rally was more to scoring political point.

Why you so upset KJ n his macai come and join? You guyz should thank him. If not for him you people will have less than 100 crowd... hehehehehee

Methink you have lost the plot...

KJ is only doing what the PM asked him to do ...same as what Zambry did in Perak. Its all about getting the upper hand regardless of how!

If you can't stomach it, too bad but KJ isn't about to give in to his detractors.

What made you think such? YOu are sooo out of touch. Must be a typical out-of-touch Setiakwan handful of cybertrooper.

You know nuts. Must be talking from your arse.