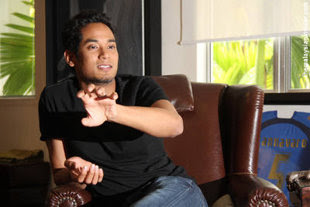 Time for talk to end and instead to walk the talk
Our eyes must have deceived us.

We thought we read in the frontpage of NST yesterday that Khairy Jamaluddin was speculated as the new CEO of PUNB. Yes ... new CEO.

And we are not sure what date the NST paper we read yesterday at the nearby warong for lunch.

You see we neither buy newspaper nor read the paper form newspaper. One reason is our source of news is online. Another is sometimes today's newspaper's news is our last week's news.

If it is not our eyes, then it could be the Minang dishes with its heavy santan. When will these Minang folks ever learn balanced meal of carbohydrate, protein and vegetables.

Back to the real world of news, online and TV that is.

Khairy to be appointed PUNB chairman 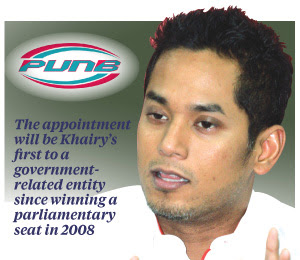 AT THE HELM: Umno Youth chief to take up post at government-linked entity soon, says source

Umno Youth chief Khairy Jamaluddin will be appointed as the new chairman of the Perbadanan Usahawan Nasional Bhd (PUNB), an entity entrusted to develop Bumiputera entrepreneurs in strategic and high potential businesses.

Although it is not immediately known when the Rembau Member of arliament will begin his tenure at PUNB, a source told Business Times it is expected to be soon.

Khairy is expected to take over from Tan Sri Mohd Abu Bakar Mohd Noor who has held the position since 1998.

A source at PUNB could not confirm the appointment, only saying that there was no such news so far.

PUNB provides a range of loans for prospective Bumiputera businessmen under various schemes such as Pemborong Prosper, Prosper Runcit and Prosper Siswazah and also networking platforms for its borrowers.

Business Times understands that Mohd Abu Bakar is well into his 80s. His previous posts include chairman of the Oriental Bank Bhd from 1997 to 1999 and chairman of the Board of Penerbangan Malaysia Bhd from 2002-2010.

Mohd Abu Bakar is PUNB’s second chairman. It is unsure how long Khairy’s term will be as the job tenure is indefinite, said another source.

This is expected to be Khairy’s first appointment to a government-related entity since winning a parliamentary seat at the general elections in 2008.

Although the youth chief position often comes with a ministerial post, Khairy was not appointed to any government post after winning the parliamentary seat.

Since then, there has been many rumours of Khairy’s appointment in various government-linked companies but nothing materialised.

Khairy, who was in his constituency in Rembau yesterday, did not return calls to comment on this latest development.

Business Times ha ...? Could this be Rashid Yusof trying to resurrect Khairy from the dead?

Jahaber at The Malaysian Insiders seems to be working-in-concert too. Careful of the MGO guys. E&O remember?

We could still criticise and demand Khairy to be denied from being given a position in Government.

The reasons could be from his sordid past in "the kitchen cabinet at home" or his questionable political and business dealings. Or it could be his failure to lead UMNO Youth into a force to be reckoned with. Or the dangerous ideology he adhered to from some MI6 or MI5 brainwashing during his Oxford days?

Or maybe it is time to bury the hatchet since he complimented Tun Dr Mahathir in his debate against Rafizi Ramli in London and move on?

One apology from Dato Kalimullah "Masya Allah" to Mahathir and legal suits between him and Matthias Chang and Dato Ahiruddin "Rocky" Attan could be settled off court. Why not Khairy?

That will be for others to speculate but we are not talking. It is not because today is the 29th of Febraury of a leap year.

As far as this appointment, perhaps it is time to allow Khairy a chance. The Ketua Pemuda of UMNO can't be left post-less for too long. Kesian dia ... Chairman Persatuan Nelayan pun dia tidak diberikan.

The people and his fans will have the opportunity to judge his claimed ability.

PUNB is an entrepreneurial development agency under PNB to cater for the smaller entrepreneurs of retailers and wholesalers and their networking.

Certainly having someone of Khairy's degree and pedigree would certainly help the Bumiputera cause. As an UMNO Youth leader, the plight of the Melayus and Bumiputeras remain deep in his heart despite his joint hands effort with MCA Youth leader Dato Dr Wee to clash against Perkasa.

Was it DAP Aspan who told us that Khairy said he is a nationalist?

Khairy has had many years of experiance in journalism, fund management, investment banking and business that could certainly auger well to help those retailers and wholesalers make that quantum leap forward.

Surely Khairy understand better the new world that demands upon the Malays to ready themselves in an environment to be more competitive, more responsive, lesser Government intervention in business, hostile towards trade barriers, and market as the ultimate determinant.

All should be fine as long as Khairy does not demand for entrepreneurs a special place in the world.

It could be a daunting task but he can always rely on his former Youth exco member and present Deputy Minister for MITI, Dato Mukhriz Mahathir for guidance, assistance and pointers.

Entrepreneurship only happens to comes under his jurisdiction.

Nevertheless, a man of Khairy's intellect and academic understanding is sorely needed. 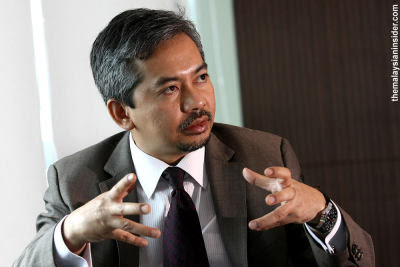 Too distanced from reality of business and entrepreneurship

Recently, we attended a talk by Teraju CEO, Husni Salleh, who happens to be our super junior in school. We must express our disappointment to what his proposed plans to develop the Malay entrepreneurs.

Bearing in mind that Teraju seems to be an after thought after the much complain by Perkasa, Majlis NGO Melayu and other NGOs of PEMANDU and it's Bumiputera deficient agenda.

Here is a disciplined studious chap who does not even detour his concentration from his study or job in hand with student activism or any form of activism or cause except perhaps as corporate paid member of a Golf Club.

How much can he appreciate and understand the socio-economic agenda with political implications to develop the Melayu?

His career as stock analysts, then moved into venture capitalist has always been as a corporate man managing resources.

Yet, he tried to share with entrepreneurs and businessman in the crowd about getting annual audit and tax return, and KPIs and ratios as indicators of success. How laughably entertaining

He was howling at the top of his voice the obvious that the Malays have not reach this and that level. With that kind castle in the air thinking, he can only advocate the Malays should be this and that as strategy.

How arrogant and distanced is he from the real world of business and entrepreneurship where it is more managing of insufficient and unaccessible resources over the world of only managing something with resources available that he is accustomed to?

Surely Khairy has more humility than that.

At the end of it, the Teraju CEO is saying Malay must do and achieve more and meet his overzealous expectation but yet he has not much resources and new ideas to offer but nicely written graph of the obvious.

The video that they thought were a fine socio-economic analysis of the malaise of the Malay were full of cliche and stereotype that only create negative perception of genuine Malay businessmen and help worsen the prejudice against Malays.

All he can think off to say are repeats of past effort and things that have been done before with the only difference they claimed, it is centrally coordinated and monitored.

Big deal! Are their claim true?

Only entreprenuers understand entreprenurship, not Analyst type like Amokh, not Accountant Book keepers like Danny Yusof, not Venture Fund Managers like Husni and lastly Civil Servants.
Teachers and educationist understand education and people in the food service understand food industry.

But the prevailing problems that compounding itself in Malaysia are that those who taught they graduate from University and all who eats think they understand education and food industry.

Ready everybody as Amokh, Tony F and Zarinah talks of education in the education review panel. Three characters of questionable cometency or/and integrity imputing what values to education?

It takes one entrepreneur to know their psyche, how they operate, how their mind works, how they strive and how they solve problems.

Unlike our racial and clannish oriented Chamber of Commerces, that is how Chambers of Commerce works abroad.

They are usually a group of business people wanting to promote business in their geographical area or community by assisting and developing other SMEs and entrepreneurs which in turn, their presence help to benefit the community and them as well.

As long as Khairy could resist the temptation to use PUNB into a political vehicle as was done by Khaled Nordin at KPUN and Zahid Hamidi at BSN, he could make a meaningful presence.

What next? Best wishes to Musa the fox too? Only transformer will transform back n forth. Sigh.. Transformer indeed.

Sdra,
I do not wish to comment on your take of the present day Melayu brats with Oxbridge, Acnts or MBAs after their names ( which I personally feel that these aren' t profession of exact science as oppose to the poor engineers, architects or neuro surgeons)
Being a Minang ( not a N9 guy) your comment on my folks' dishes did not escape my observation.
Not all minang dishes are laden with santan but any rendang or kalio san santan is like penang laksa gravy without the fish. Try anything with balado , red or green.
Why target the Minangs to learn about balanced meal? The nasi kandar joints around town should also shoulder the same blame.

RATHER KJ THAN A LOT OF OTHER POLITICIANS IN MALAYSIA. AT LEAST THE MAN'S GOT BRAINS,ARTICULATE AND HAS INTERESTING PERSONALITY AND NOT AN EMBARRASSMENT IN INTERNATIONAL FORUM. THAT'S MORE THAN YOU CAN SAY FOR MORE POPULAR, CRINGE INDUCING PERSONALITIES IN THIS COUNTRY.

Bro..
U out of date. Rashid yusof had left nst last week. Now with jj . To plan strategy for bn to wade election pru13.

Is he not still a liability to the party with his so called articulate reading of the current political situation. But then again, his old buddy Zaki is also very much in the news these days. PM Najib has a very different definition of the word 'change' ...

well, with KJ's vast experience as a broker during Pak Lah era, maybe he could share it with the usahawan bumiputera.

ala brada, focus on miang disk cukup la, why tukar topic nasi kandar pulak. If we could make better minang disk why not Bro.