One blind villager held one of it's feet. He said, "This animal has foot like a tree trunk. It must be strong and unwavering to winds."

Another village held it's tail. He replied, "The animal feels like a rope with bushy end. Suspicious ..."

The blind villager holding one ear said, "I do not know what to make out of this animal but it feels like a large wing. This could be a very big bird. It could fly and disappear in a big way."

One blind elderly villager said, "It can't be a bird. From my end it feel slippery, smooth and pointed. Very sophisticated and probably very complicated animal."

Then one blind lady holding the trunk howled, "Yes, it is smooth but wet at the end. It has a snake-like body that could suck and spray water."

"No," said another villager.

"It is like a wall," referring to the elephant body. "Just can't past through or even push it. We will never know what it is." 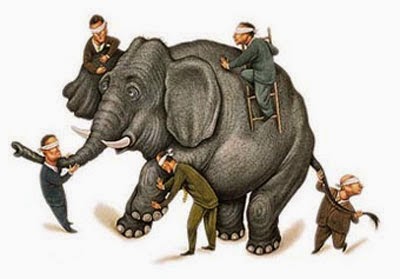 The villagers decided to get some consultants to come over and examine the animal. They called their blind friends working as consultants.

The blind consultants came and hurdled around the animal.

One of the clever consultant friend touched the body and concluded, "Ah! This animal is a burden. It is too big and need a lot of money to feed it. What kind of food does it take? How much water it consume?"

While, another clever consultant holding the trunk said. "I am not worried about that. As long as it is useful, it can generate income. This trunk can be used to work and lessen the villagers' daily burden.

"And we can get our consultancy fees...."

The cleverest among them was holding the tusk.

"This pointed object could be used for multitasking by the animal to get food and defense itself in the wild. It's material is smooth and hard. Something exotic about it.

"There must be premium value and could generate high return. We can do many things and be very creative."

The consultant at the tail replied, "That is interesting.

"However, we are all blind. The villagers are also blind. We only understand about this animal from what we could get hold off. We do not know whether this animal is safe or dangerous to hold."

The clever blind consultant holding the tail felt differently. He cautioned them, "No, we need to get some expert or someone familiar with the animal convinced it is safe and useful first. If the expert are not convinced, we should not pursue.

"No point of us trying to convince the villagers. The experts will say something else and the villagers will stop believing us."

he..he.. finally they decided to abandon the "white elephant" ...

mat maslan had earlier defended 1mdb in parliament. Now he has begun to sing new tune.

A Mazlan is as clueless as his boss.
A Wahid looks cluelessly optimistic re 2015 growth at 5 % when World bank fcsted growth estimated at 4.5 %.
In the mean time, the clueless globe traveller announced that the gomen is still thinking what next to do.
Sovereign fund borrows expensive funds.When repayment is due,the fund apply to BN to change rules for NPL.
When BNM changes accounting rules,it spells doom for integrity and NII.
That why the big media group VVSED staff.They know more than gomen,the Guvnor and the clueless.
arjuna waspada
changkat lobak.

I agree what you say at the end.

Mysterious dumbo shd explain themselves and not just answer questions raised. No point viralling answers in malay and with socio political bloggers. They are irrelevent and do not understand.

PMO ppl shd be talking to ppl within the banking, finance and investment industry. It is them that need convincing.

If they are not convinced, the malay media and political bloggers could at best confuse the masses. The bankers can easily neutralise their defense.

Rumous are saying lodin, hizmi and ismee fail to explain how the money was raised and why the repeated revaluation of land which made it seem it was to whitewash losses.

This does not give confidence to the ability of mgmt. it seems mysterious dumbo is run by someone outside. Is it jho loh or rosmah or nazir, OR all?

Yet ismee is being earmarked to run PNB. Is he capable? This guy does nOt talk much in public. How will he deal with the many asn asb investors when something go wrong?

Also, there have been no denial coming from zeti to squash the rumour of their meeting. It is logical that they have npl coz none of their business operations are generating cashflow. It is all from borrowing and their operations is similat to hedge fund or leveraged investment scheme. The puzzling this is hizmi used to say they have cash of rm15 billion.

It is quite ok an intention to nationalised the ipp, develop sg besi but what about petrosaudi?

No one from the oil n gas industry hv heard of petrosaudi. If mysterious dumbo are piggy backing on them, they cant be having easy money of high return by doing exoloration n trading in indonesia, venuezuela etc. Why price turki abdullah not just abuse his power to get saudi cincessions?

It only affirm spin made on cayman island account, delayed auditor report and exorbitant goldman sach fee. Since govt and pmo side are weak in their communication and pro BN media are led by idiots, they have not been able to counter.

It is only made more difficult by the stupid communication strategy they are doing.

The only for them now is to make tun mahathir understand and get reputable professionals help them out.

This issue is beyond tengku sharifuddin, akmal or hardev to handle. They are not likely to understand the technicality and complicated issues in structured deal, islamic accounting standard etc.

Still the question as to why takeover genting sanyen which is due to be transfered at rm100 n asset of rm300 mil at best for the value of rm2.5 bil.

Mysterious dumbo still got to finance the newly acquired and awarded ipp. Can they raise more bonds with confidence plummeting?

Ah well ... Lets just go for holidays and worry about it next year.

For a commitment in the billions. it is not belieavable that the government can be so sloppy and reckless in taking risk.

There must be more that the old tomers could not understand this new financial innovation.

Have we not learn anything on prudence after facing so many crisis?

Problem is 1mdb is only answering with denials but not giving a wholesome and clear explanation.

This story is a good analogy about people's perception of God or Creator. Nobody could have a complete picture of what God is. Each would perceive God with his/her own understanding. Each could be partially right although all might perceive Him in different light.

Hence, all religions would have different concepts of God and of course, the religious experts/consultants would try to sell their religions to everyone and each would declare that theirs is the true religion.