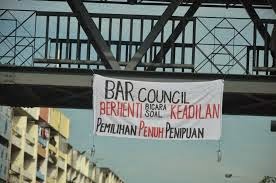 The result yesterday shows no UBAH as the same "clique of lawyers" dominated the winner list. 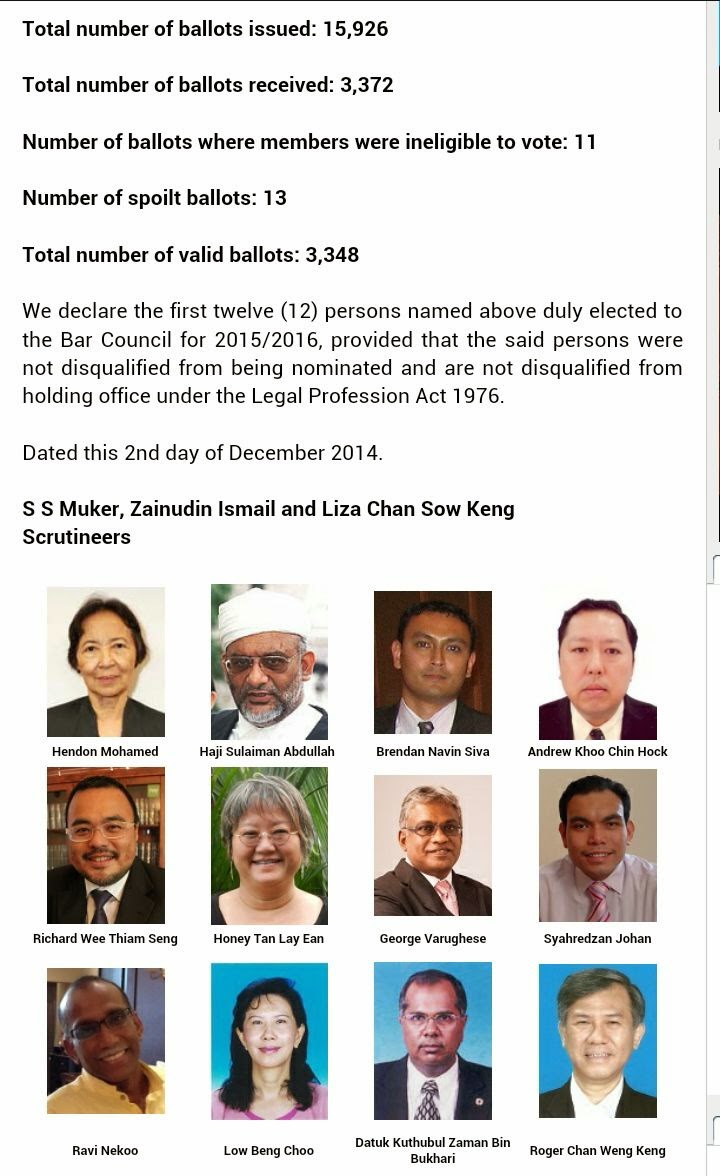 Few lawyers expressed the suspicion that the result was rigged to place Andrew Khoo, BC's Commitee member in charge of Human Rights and with close links with HR activists in the US government and UN, as the next President.


Few candidates had campaigned hard and it was not reflected in their results. It seemed to be rigged to show their results to remain the same or gain by 1 or 2 votes. 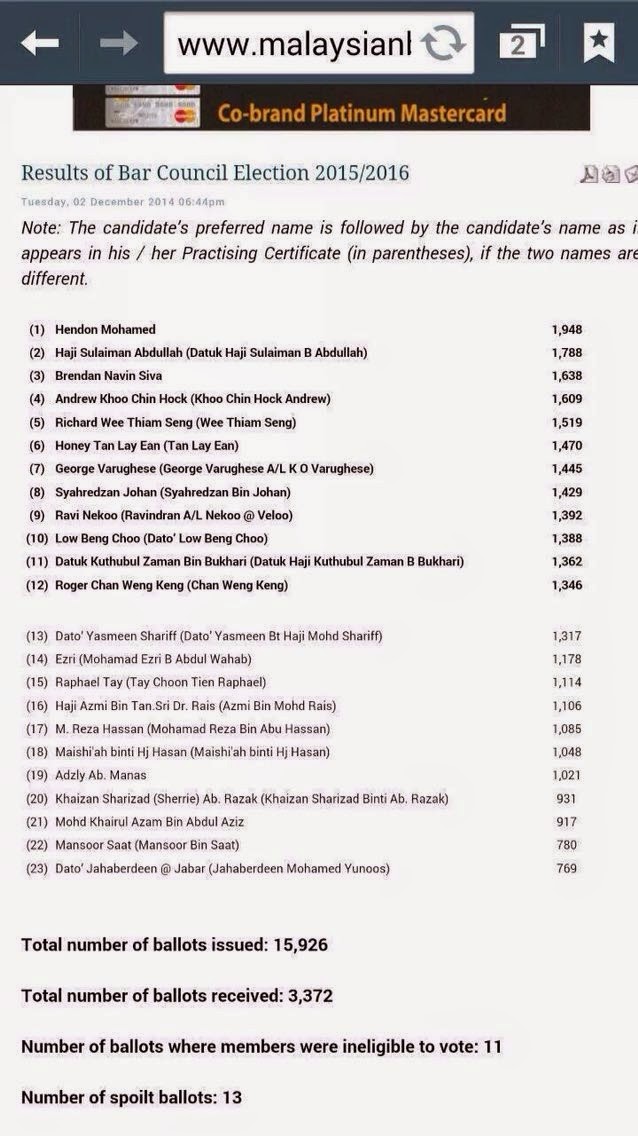 As of end of office hour yesterday, some members in our group raised concern over Chin Oy Sim answer in the Star report.

There was uncomplimentary personal remarks of her. They complained that she was merely reiterating the process but had no idea of had returned the ballot papers up till yesterday evening.

It means the percentage of returning ballots was not made transparently known but kept a secret.

There was the suspicion of ballot stuffing practise. BC practises postal votes to accommodate its members all over the country.

BC was said to have released the statistic that only 21% of lawyers took part in this "transparent" election.

Does it make sense that 79% of lawyers aren't interested to participate in BC's most important activity which supposedly determine its future direction? They do not participate or do not have faith in the process?

The most blatant electoral infringement was the so-called LIVE streaming of the counting. The video was only focused on one table when there are 8 tables doing the counting.

For any candidate or their representatives to observe the counting, they were required to sign undertakings as to not allow any recording or transmit any image, video or perhaps audio.

If there had been any infringement, BC would have asked for proofs but without any form of records,  how would the candidates prove any wrongdoing?

KUALA LUMPUR: Amidst grouses over lack of transparency in the Bar Council election, lawyer Hendon Mohamed emerged the top winner for the 2015/2016 term.

The election saw 23 candidates contesting the 12 posts in the Bar Council.

The results were posted on the Bar Council’s website.

Lawyer M. Reza Hassan, one of the candidates who contested and lost, was denied entry into the hall to watch live streaming of the vote tallying process.

Reza had refused to sign a letter of undertaking prepared by the Bar Council, barring observers from taking photographs, recording or transmitting images of the vote counting process.

“It is not required by law to sign such an undertaking. That is why I refused to sign the document.

"I promised that I would not take any photograph, but they immediately switched off the live streaming, forcing me to leave the hall,” he alleged on Tuesday.

An observer claimed that the camera focused only on one group involved in the vote counting process.

“There were a few groups counting the ballot papers. But the camera zoomed only on one group.

“We barely saw 200 ballot papers via live streaming. There is certainly no transparency as we could not see the rest,” said an observer, who spoke on the condition of anonymity.

Lawyer Manjeet Singh Dhillon, a former Bar Council president, also questioned the electoral process. “What is there to hide?” he asked.

Malaysian Bar president Christopher Leong could not be reached for comments.

The lawyers blamed it on Little Napolean inside BC trying to cover for certain groups. .

It was a blatant lack of transparency in BC's handling of their election and it made "a mockery of its own call for free and fair elections nationally. The Bar Council has no credence left and is in serious need of reform", to quote a young lawyer.

A senior lawyer from Penang commented, "Bar Council has without fail being critical on the conduct of The Election Commission to the extend of becoming a tool of the opposition calling for fair election when Bar Council itself can even conduct a fair, free and transparent election of its office bearers.

He added: "Therefore, Bar Council has failed in its duties towards its own members and such failure demands the resignation of all the current office bearers.

"Further, an independant party such as the Election Commission who have credibility and experience in conducting fair election not only in Malaysia but also assisted other countries, to conduct the Bar Council elections from now on."

A celebrated lawyer-politicion quipped, "I have read the "judgment" written by learned brother and concur in his finding. The court being unanimous, its hereby declared the Bar Council is indeed a Barua."

There is now basis for government to amend the Legal Profession Act to allow other accredited bodies to also represent the legal profession like Law Academy in Singapore.

BC have been too involved in politics and carrying certain agenda then serving it's role as a professional body.

Bangang! They must used the same lotus worksheet a party used before... And they must got blakout when counting... Then only election correct...

Well I am glad that some members of the Malaysian Bar are speaking up.

Anyway, from a legal and editorial point of view, the organisation's name is the Malaysian Bar not the "Bar Council".

Unfortunately, such incorrect use of names has ended up being perpetuated so widely in the media, blogs and public discourse that the Bar Council has become synonymous with the Malaysian Bar in the public mind.

Hopefully, bloggers like your goodself will strive to help inform your readers about this key difference between the name of the governing committee and the name of the organisation, instead of helping to perpetuate the misconception.

Then again, perhaps it is not a misconception, since the governing committee has defacto metamorphosised into the organisation itself.

We always have this say," when youre pointing a finger to someone for doing bad things, another four fingers are pointing at you"

Their actions and reactions are in PR's shoes... we expect nothing from them to support our (Melayu) "gomen" because "they don't speak the truth, the real truth"

A few born losers and political interested lawyers casting comments and aspersions ain't gonna make most other lawyers or the general public believe your spins, la.

You must be damn old to continue spinning such grandmother stories to sell to ignoramus.

similar to Dap commitee election.... but we keep on trusting them.

so who is dumber ?

The Bar Council by taking a bias stance has besmirched their honourable standing as a reputable national institution. Laws like the Companies Act 1965, the Bankruptcy Act 1967 and the Trustees Act 1949 are left unrevised and not up-dated because the Bar Council is no longer there to protect the citizens with the latest recommendations. Let round pegs fit round holes and square pegs fit square holes. Be either a good lawyer or a good politician