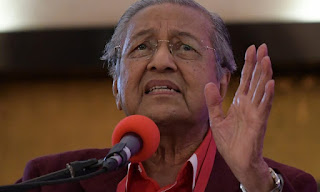 “I apologize for all my past mistakes,” he added, seemingly wrapping up his speech at the annual general meeting (AGM) of his newly formed political party, the Malaysian United Indigenous Party (PPBM).

That, however, is where the niceties stopped. Mahathir might have been remorseful of his past, but he had little patience for the swelling numbers of politicians who have recently left his PPBM. Not missing a beat, he went on to say that he won’t apologize for calling them “garbage” – his long-favored slur.

“They are even worse than our enemies… they have betrayed the struggle that we have fought for the people,” Mahathir added, seemingly confirming suspicions that there is little place for alternative opinion within his party.

The number of women who have left the party is particularly glaring. Hasnita Hishamudin, the women’s wing assistant secretary, left in September while five more women’s wing seniors departed in December.


“He is a person who will label people who do not follow his words. He is a dictator,” former party vice president Hamidah Osman told local media last month.

Some remaining PPBM grandees claimed bribes were offered to those who have left, including Hamidah, who rejected the accusation and said she was considering suing Syed Saddiq, the PPBM’s Youth chief who made the assertion.

But the biggest controversy could have been the AGM itself. According to former and current members, the event went against the party’s constitution as branch and division level meetings were supposed to be held beforehand.

One division chief said local offices had not even elected delegates to attend the AGM, another breach of the party’s constitution.

The Registrar of Societies, the government department that oversees the registration of political parties, has been called to investigate the case, though the PPBM may well argue that the same department threatened it with deregistration in November if it didn’t hold an AGM by the end of 2017.

Political parties are required to hold an AGM within a year of their formation. There is thus now a chance that Mahathir’s PPBM could be deregistered before elections, which must be held by August, are staged later this year.


With polls fast approaching, many Harapan elites are now careful to say publicly that Mahathir is a reformed character who can lead the ‘Reformasi’, a movement for political change that started in 1998 when Mahathir, then prime minister, sacked and jailed his deputy Anwar Ibrahim, who became the opposition’s de-facto leader.

Anwar’s wife, Wan Azizah Wan Ismail, is the president of the Social Justice Movement (PKR), which was formed during 1998 during Reformasi street protests and is now a component of the Harapan coalition.

She is thought to have at least publicly ceded to Mahathir’s prime ministerial candidacy, though not everyone in the party is happy. Its Selangor chapter, for instance, opposed the motion this month.

Some commentators believe Harapan needs a figure like Mahathir, who they say has the experience and temperament to hold the fractious coalition together. A rejoinder, however, is that as his PPBM comes apart he’ll have little chance of overseeing and uniting an even more unwieldly coalition of parties.

Prime Minister Najib Razak, in tune with the feelings of many Malaysians for once, said last month: “I heard that a [92]-year-old man is still interested in becoming prime minister again…the opposition is really in a turmoil.”

Najib has long derided Harapan for pursing “Machiavellian politics,” in which the enemy of my enemy is my friend. Analysts, not dissimilarly, suspect Mahathir’s rationale for joining the opposition is first and foremost political revenge.

Indeed, he often seems more interested in ousting Najib rather than toppling his ruling United Malays National Organization (UMNO), from which Mahathir quit in 2016. There are also suggestions his focus is more on embarrassing Najib than ushering in a new era of clean politics, as many of his Harapan allies aspire.


But a Malaysian Machiavelli is what is needed, some say, if the opposition is to wrestle Putrajaya away from UMNO, which has been in power with coalition partners consecutively since 1957.

One purpose of Malaysian coalitions is to ensure allied parties don’t compete for the same parliamentary seats, thereby fielding one strong candidate against the rival coalition’s contender.

This month, Harapan agreed to its seating allocations in peninsular Malaysia, with PPBM allocated 52 seats, one more than the PKR. The DAP will contest 35; Amanah 27. Allocations for seats in Sabah and Sarawak have yet to be confirmed.

Given that PPBM candidates are competing in mainly marginal seats, where UMNO’s support is thought to be fading, a strong performance could make or break Harapan. But this is predicated on two key assumptions which may or may not be true.

First, support for UMNO is probably not as low as the PPBM thinks. Back in 2015 almost four out of five Malaysians were unhappy with Najib’s leadership, according to the Merdeka Centre, a local pollster.

But memories of the multi-billion dollar 1MDB scandal that previously badly tainted Najib’s image now seem to be fading while UMNO has promised popular reforms if re-elected. The economy is also growing more healthily after years of poor performance.

Second, it’s not clear that the PPBM can offer the primarily Malay-Muslim constituencies where it will compete against UMNO anything that the long-ruling party cannot. In some respects, the PPBM is relying on the belief that it can somehow out-UMNO UMNO for popular support.


If the DAP, PKR and Amanah retain the same number of seats they currently hold combined (69), then it would mean that the PPBM needs to win 43 seats for Harapan to form a majority government.

It won’t be easy. Pakatan Rakyat, Harapan’s predecessor coalition that split in 2015, was at its strongest at the 2013 general election, where it won the popular vote (50.8%). But it only took roughly 40% of parliament’s seats because of Malaysia’s heavily gerrymandered, first-past-the-post electoral system.

Some analysts think an opposition coalition needs to win at least 60% of the popular vote, if not more, to gain a majority in parliament.

But prioritizing PPBM candidates over Harapan’s other parties would arguably be a damaging opposition admission that only a Malay-centric party (PPBM) can compete against UMNO. This is, of course, a realist view of Malaysia politics, which has long been divided over race and religion.

Analysts say that if Harapan had chosen an ethnic Chinese, non-Muslim for its prime ministerial candidate, someone like DAP leader Lim Kit Siang, then many Malay-Muslims would not vote for the coalition.

The concern, however, is that the PPBM will simply adopt the same tactics and policies of the ruling UMNO party if elected. Not everyone is convinced that short-term electoral gains are worth the long-term consequences.

Mujahid Yusof Rawa, vice president of Amanah, said earlier this month that “there is no point if PPBM replaces UMNO NO’s racist doctrines without reforming the Malay community.”

But even if the improbable happens and Harapan wins the upcoming election, there are concerns that Mahathir’s and his PPBM’s pre-election conciliation transforms into something less conciliatory.


This month it was announced that Anwar will be released from prison in early June, perhaps in time to join the opposition on the campaign trail, though he will not be eligible to contest the ballot. Najib has yet to announce when elections will be held; Anwar’s release might prompt a pre-June election.

The hope of many within Harapan is that if the opposition wins Mahathir will serve only temporarily as prime minister until Anwar is able to assume the role. He would need a royal pardon (not difficult if Harapan wins) and a parliamentary seat yield by another elected official for this to happen.

That hand-off is thought to have been the prerequisite for Anwar’s support of Mahathir’s ascension to Harapan’s leadership. But some within the DAP and PKR say privately that they are concerned Mahathir will not voluntarily step down if Harapan wins.

Conspiratorial thinking is a Malaysian pastime, not least because Malaysian politics is so often conducted conspiratorially, particularly in an election season. That’s in part because it’s the same old faces – Najib, Mahathir and Anwar included – still grasping for power, often by hook, crook or whatever means possible.

Mahathir could try ally with anti-Najib cells within UMNO.

He will collaborate with politicians, including within Pemuda ranks, seizing on the perception Najib is not popular to topple the President and seize control of UMNO.

Mahathir privately told PPBM leaders that the party is temporary and will disolve upon toppling Najib with all returning to UMNO. He will regain control of government.

However, the senario need a successful outcome for Harapan, particularly for PPBM and despite staying in power, dismal performance of BN.

If BN lose with no room to manouvre, Mahathir may not bother to wrest control of UMNO.

Do not discount PAS. One could laugh off Hadi's claim of winning 40 seats and PAS is king maker. They are dubbed kafir for spoiling Mahathir's plan.

And, never ignore the two blocks of Sabah and Sarawak which are anti-Mahathir and not comfortable with PAS.

It is more challenging for Mahathir to regain power and grasp control of federal government. Upon seizing power and without sufficient numbers, DAP may see him as politically irrelevent.

If Mahathir engage into another quarrel, BN, Harapan and PAS could call for more RCI on Mahathir. It's a no win with possible prison sentence looming and likely he migrate to Buenos Aires.

A Harapan win does not promise a peaceful, stable and prosperous Malaysia.

After growing pain of transformation over, it will be a more promising Malaysia with greater prominence on the world stage.

The feuding old politicians pass on (so voters must make them pass on) and a new Malaysia with brighter future for all Malaysians lies ahead.
at 1/14/2018 09:53:00 AM