The Lynas issue was seen by local Pahang political analysts as the "care makan" issue for Fuziah and Wong.

It salvaged Fuziah Salleh from her poor performance as first time ever absence MP for Kuantan. It made a name for Wong that he eventually managed to gain himself a place in Parliament by beating MCA President in Bentong.

However, there was no politics for the review as Minister Yeo Bee Yin insisted only on professionals and academics with both Fuziah and Wong bumped off the review committee. With both out, public managed to express their concern and Lynas claimed to have come clean.

Somehow the media (pro-government media that is) hardly reported any negative feedback from the public except cautionary statement from a medical doctor. 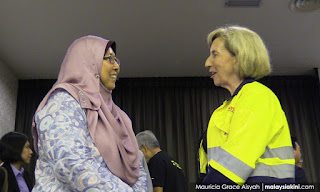 From media report, it seemed to be only a Fuziah and Wong political rally. However, both lacked any matter of relevance to refute Lynas.

FMT here reported Fuziah was rambling on when Lynas was established in 2012, the law did not require Detailed EIA report. Funny that it need be higlighted, because since 2012 till 2018, has there been any proven environmental mishap or green glowing baby born?

There was an emotional outburst from the public questioning why LAMP was allowed to dump its residue. Fuziah took the political opportunity to repeat her old line to demand radioactive waste back to Australia.

Lynas have said before that residue waste are send back to Australia. The harping point the anti-Lynas has is their permit to store residue which expired on October 31st.

The issue of radioactivity would be one issue to be looked into by the review committee. Extract of the FMT report below:


Ismail Bahari, general manager of radiation safety at Lynas Malaysia, said the scheduled waste produced at the plant was “not necessarily hazardous material”.

He stressed that NUF, a magnesium-rich gypsum released as one of the two by-products of LAMP’s activities, is not hazardous, despite being classified as “scheduled waste”.

LAMP’s main products, neodymium and praseodymium, are used in magnets for motors that drive automated seats and windows in cars, motors for hybrid vehicles and as magnets in electronic products, like DVDs and hard-disk drives.

The production of these materials releases two forms of gypsum, which is a soft sulfate mineral, as by-products. Besides NUF, which is non-radioactive, an iron phosphogypsum known as WLP, contains very low-level of naturally-occurring radioactivity.

The Lynas radioactivity expert argued that "reusing radioactive waste is the best way to dispose of it and the permanent disposal facility (PDF) should only be implemented if all else fails". 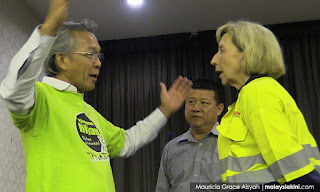 As far as Wong, he seemed speechless with only cynical remarks to accuse the review committee of being paid by Lynas and acting as salesmen for Lynas.

He may have got some members of the public to be emotionally charged during Q&A and intermittent heckling but as Professor Ismail Bahari pointed decisions must be based on scientific proof and reference points as in the standards and guideline set by authorities.

If there is no political intervention, Lynas did nothing wrong and should be allowed to continue operation. Any legitimate subsequent issues to arise, it require remedial action and be worked out  between government and Lynas.