Move to remove Muhyiddin from PPBM 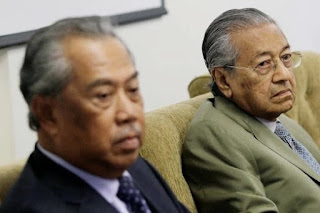 Quite sure, the public must be puzzled with the move by Tun Dr Mahathir to call for Malay unity and called upon all Malay parties to join PPBM.

Many Malays including among the intelligentsia Melayu failed to realise that Malay unity is a myth that is not achievable. It is political cliche seldom used by Mahathir to draw support. In the practical sense, majority of Malay is united under UMNO-PAS cooperation. Mahathir is just drawing on straws in desperation.

Yesterday after the PH Presidential Council meeting, Mahathir said not to form new Malay parties but join existing ones. Why is he focused on Dato Ibrahim Ali's Putra and Dato Ezam Md Noor's Negara?

He went on further to say PH cannot accept new component parties. UMNO and PAS members can join PPBM or Amanah, instead. Is he kidding to wish PAS would join PAN?

It does not make sense. 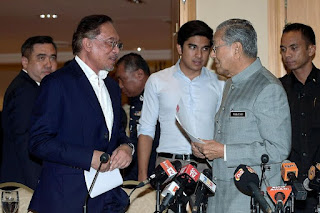 Basically, other component parties of PH have blocked Mahathir from drawing on the strength of other Malay parties by getting them to join PH and strengthen his position.

In the mean time, Dato Seri Ahmad Zahid Hamidi made it clear yesterday that UMNO will not be in cooperation with DAP or any other parties that is in bed with DAP. It is the same line expressed by Dato Mohamad hassan, Dato Khaled Nordin, and Dato Dr Asyraff Wajidi.

Only Dato Hishamuddin Hussein Onn and Khairy is asking UMNO to look at Mahathir's offer positively. How could a party leader look positively at a preposition to close up his own party to join another smallish party?

If they are not willing to stick through and through with UMNO and ummah unity, Hishamuddin, Khairy and their block of MPs should join PPBM. 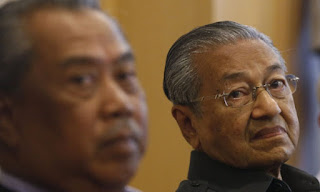 PPBM had never held a constitutionally acceptable Annual General Meeting since its inception at end of 2016. It has announced an AGM to be held soon but why suddenly the idea of having an EGM?

It is an open secret that PPBM intend to implement a Satu Ahli Satu Undi (One Member One Vote) System or SASU in short. But to call for an EGM immediately and before the scheduled AGM means Mahathir is sasau and up to something.

One can bet one month salary and win to claim Mahathir is angry with the recent boycott of his meeting with PPBM Johor head. Imagine, the venerable Chairman came all the way and only 7 out of 25 PPBM division head turned up. Muhyiddin was not present and was in KL giving update on the investigation on the semburit video.

When Mahathir is angry, he will take action. If he had read this blog and it is not likely, but his media people may have, he will finally confirm what he already suspect that Muhyiddin had been parking his people as division heads and MPs/ADUNs everywhere.


Actually, he does not need to read. He is aware but postpone his action to await a more timely situation.

Before the general election, Muhyiddin was at loggerhead with former PPBM Vice President and founder, Dato Hamidah Osman.

She complained to Mahathir of Muhyiddin moves which disrupt the grassroot members and newly set-up branches and divisions.

Back then, Perak MB, Dato Seri Faizal "Peja" Dato Azumu was in cahoot with Muhyiddin. 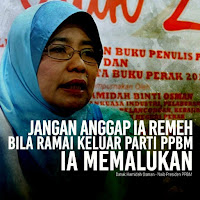 Muhyiddin action resulted in members leaving the party in the thousands and branches and divisions closing up.

Hamidah was fed-up and felt betrayed. Her relentless effort and sacrifice to set-up PPBM was hijacked by Muhyiddin.

She was instrumental in going all over the country to garner grassroot support and making the links with other political and community leaders for PPBM.

Mahathir sent for Sufi to talk to the sister, Hamizura Osman, the other half of the dynamic Osman sisters.

Sufi asked Hamizura to persuade Hamidah to come back. He told Hamizura to deliver Mahathir message to Hamidah to be patient. "We" will defeat Muhyiddin during the party election.

Can always check with them. But it is expected they will deny.

It all make sense to implement SASU. Muhyiddin is not a popular leader, and difficult to smile. By nature, he is serious and stiff, thus could not be warm and friendly to win the people who meet him. Maybe he is shy.

If every member is allowed to vote, Muhyiddin does not stand a chance with even the likes of Mukhriz with his goody two-shoes image.

Sources claimed the EGM is expected to be held within this month. Wonder is there sufficient time to legally call one? 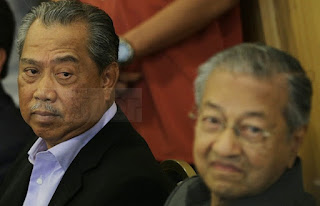 If this were to happen, Muhyiddin will likely find some trouble issue, perhaps Mahathir's version of 1MDB, as excuse to warrant him to quit PPBM.

Immediately, the likes of Maszlee Malik,  Wan Saiful and his own men holding MP position will come out in the open to migrate to Anwar Ibrahim.

Again, it does not make sense but since Mahathir worked hand in hand with DAP, politics in Malaysia has reached an unprecedented state of nonsense. It is this nonsense that made the country directionless and heading for a major downfall socially, economically and surely politically.

As said in earlier posting, Mahathir has reached the level of senility that is becoming obvious.

It is not like our mom and pop beginning to forget things, becoming senile and even suffering from dimentia. In their moment of senility, common folks talk of petty and inconsequental matters.

Orang pandai like Mahathir still sound pandai when they are nyanyuk. It takes a keen observer to notice he is forgetting things and his actions incomprehensible.

Under such extreme political pressure and running the risk of getting knocked out again, Mahathir is opening new front to fight. The first knock out actually came from Dato Najib but Mahathir resorted to the extreme, un-gentlemenly, and out of sense action to ally with Anwar and DAP.

Mahathir is about to get knocked out again and yet he wants to reduce his number of friends.

No worry, there will always be that unschooled loyalist, who will find something to marvel over Mahathir's nonsensical political moves. Even during our days of supporting Mahathir, it was puzzling to see some journo-blogger finding his mere loyar burok statements as brilliant.

What so brilliant about deceptive statements just to win an argument but has no long lasting impact? The Indra and Indi at your neighbourhood bar can do better.

One is not talking yet about Mahathir's other loyalists like Kelab Che Det, Ratu Naga and Parpukari. Among them, there is one claiming to be a blogger but could hardly write a sentence without retyping several times in such stressful manner.
at 7/09/2019 09:45:00 AM

I like reading your blog for it is packed with insights, forethought and critical analysis. But to criticize other blogger's writing, I think you are yet to be qualified, bro. if it is their content that you are mocking, then it's fine I guess. But Writing style? yours read barely like a high school gossip journal.