Tanjong Piai by-election is a test for DAP 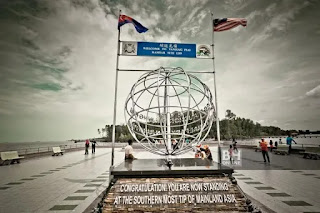 Tanjong Piai sits at the southernmost tip of mainland Asia. In the 90s, there were ideas and proposals to take advantage of the attraction to turn it into a major tourist destination.

However, it never got off the ground. There were no serious commitment from both state and federal government.

Fishery, and local tourism are the main economic activities. Kukup is a popular seafood spot to Johor Baru folks and Singaporean.

The by-election arising from the death of Member of Parliament and Deputy Minister, Dr Farid could be considered as god-sent to give Tg Piai the national attention.

Currently, the political crowd are moving south for nomination tomorrow.

As they exit Simpang Renggam, the constituency of Dr Maszlee Malek and before driving towards Tg Piai, they would be reminded of his promise to offer no toll to vehicle exiting Simpang Renggam.

Politics of broken promises will be the main conversation for the next two weeks till polling date. 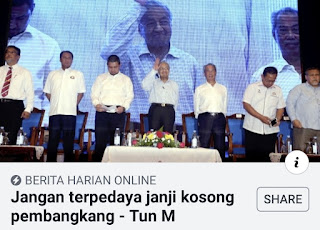 PH will be facing the by-election under a condition of hostile voters to the broken promises, and sense of hopelessness to the failing economy, rising taxes, still rising prices of goods and massive abolishment of government subsidies and socio-economic assistance.

At the same time, PPBM is facing the by-election with Tun Dr Mahathir - the Prime Minister, party Chairman and statesman - at his lowest ebb in popularity and under threat of losing his position anytime. 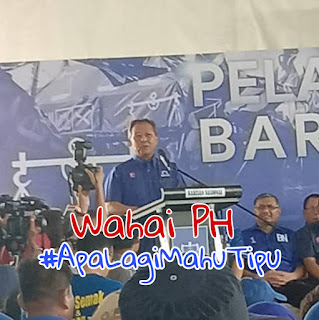 The online tagline going around on social media is #ApaLagiMahuTipu or #MahuTipuApaLagi to dash any chances of PPBM bringing hope through election promises.

PH basically failed to deliver any promises made in their Manifesto, particularly the 100 days promises.

People's life would and should be the narrative of the by-election campaign and not likely the current media -online or print - debate within BN and right wing Malays over putting up a Malay Muslim candidate. 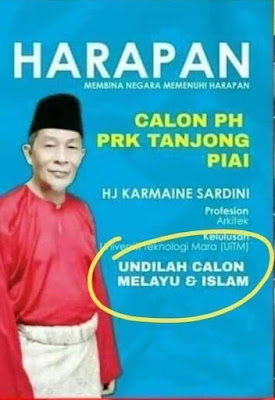 An election is the penultimate realpolitik at work. It is not the time to be ideological or academic or utopian.

That is to be done during "peacetime" to gain the wider appeal worthy to be included in the latter day political narrative and promises of election campaign. 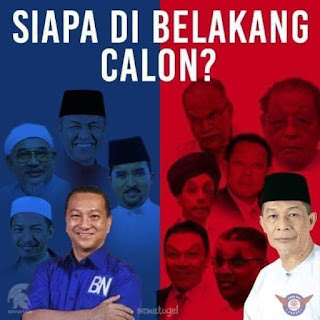 Election is war time and no time to syok sendiri or to get dreamy. It is time to be practical and it is all about numbers and other objective to be achieved from the election.

For PPBM, it is to defend the seat they won last year and maintain their numbers in Parliament and PH with the hope to gain more. 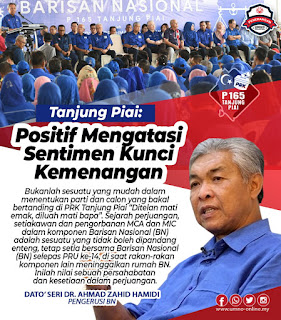 Any turncoat within UMNO would want PPBM to win and take up Mahathir's suggestion for UMNO candidate as a directive.

It explained for the strong lobby coming from the political home state of Dato Hishamuddin Hussein Onn.

It is an open secret that he is the hands behind the UMNO MPs frogging out of UMNO to join PPBM - past, present and near future - on the pretext to prevent Dato Seri Anwar Ibrahim from becoming PM.

He had clearly said not leaving UMNO but is in a hurry to return back to government albeit for the most substantive role.

It means a BN loss would be advantageous to oust Dato Ahmad Zahid Hamidi. One could see the political discussion ridiculing and attacking Zahid for being indecisive and held back announcing the candidate as directed to him.

Zahid has a bad habit of trying to be funny in his speech but usually it does not turn out so. He got picked on and is put in a bad light.

Despite Johor UMNO Chairman, Dato Hasni's claim that the delay is a strategy, its obvious there was a flip flop. 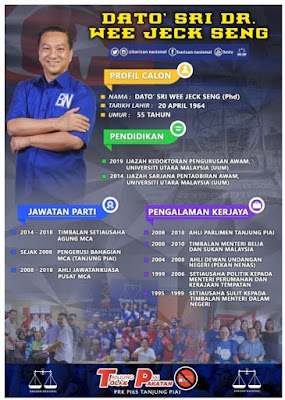 The logical and strategic political move is to maintain former MP Dato Dr Wee Jeck Seng. It is one seat closely associated with "Jackson" Wee and suitable for MCA to run.

He is well liked locally and speaks Malay fluently like a Malay and another Wee by the name of Dato Dr Wee Ka Siong.

During GE14, Wee Jeck Seng received 80% of Malay votes but did poorly with the Chinese voters due to the GE14 wave.

The sentiment among Tg Piai Chinese then is to dispose Najib and DAP managed to sway the votes to PPBM. However, situation may have changed.

If there are leading, coincident and lagging political indicators for politics, the leading indicators of Chinese businesses are negative for DAP.

For many months, grassroot Chinese have expressed their resentment towards Lim Kit Sing, family and faction members, openly and verbally abusing them during events.

The negative undercurrent from Inland Revenue Board hard move against Chinese businessmen have been going on for a year. 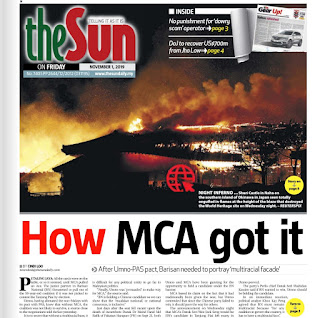 These indications are beyond the attention of those considered as coincident and lagging political indicators.

The coincident could be those that would only react upon events happening and get reported in the media.

The laggard do not react and usually disbelieve the implication of any events till it hit them in the face. The Malays are usually the lagging indicators.

It is not a surprise that a study conducted by UMNO Johor is heard to put Chinese votes for Wee Jeck Seng too low and significantly differ than other studies done, including an independent one.

The UMNO Johor high official responsible evaded any discussion with a high official from MCA till he was cornered late midnight at a hotel and had to talk till wee hours in the morning.

The official lacked any substantive arguments and remained stubborn till the MCA official did the so-called threat, which is not really a threat. There was no official position or statement from MCA to threaten to quit BN.

It could have possibly been said in the heat of the moment as, "If you cannot explain yourself and remain stubborn, we could ...." The social media speculated MCA and MIC threatened to leave BN. It will cause BN to be dissolved and puts UMNO in a difficult position in parliament, Pahang and Perlis.

The Johor official may have withheld the content of the conversation till later thus ended up a decision was made to select Jeffry Din. 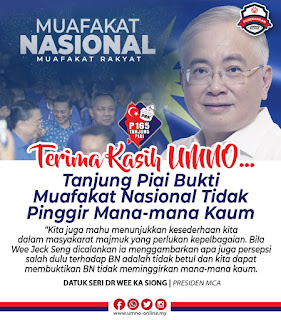 Zahid is partly to blame for the poor decision and bad handling. There was sufficient period from the time EC announced the date to preempt any eventuality.

He acknowledged it is an MCA seat, but submitted himself to UMNO Johor pressure. However, Zahid should be credited for being brave enough to admit the mistake and held back the announcement. 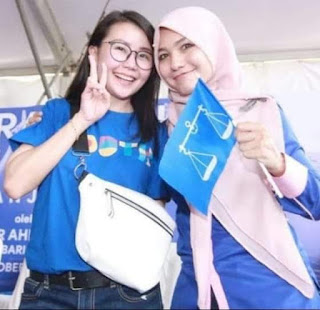 Since PPBM offered a heavyweight candidate thus in the words of an UMNO Vice President, it is not possible for BN to secure an 80% Malay vote with a Malay candidate and win without Chinese votes.

In the current dispute between Mahathir and DAP on the power transition for Anwar to replace him, DAP could possibly sabotage the election and get the Singapore based Malaysians registered by DAP at Tg Piai to vote against PPBM.

There are indications DAP members in Tg Piai intend to vote against PH and teach Lim Guan Eng a lesson. Will that translate to sufficient votes for BN?

The objective of BN at Tg Piai should be to test the Chinese votes and hopefully find the turnaround in fate with Chinese voters. 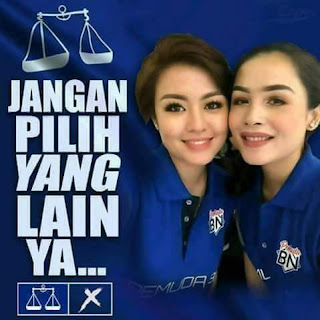 It is also the opportunity to prove Muafakat Nasional is not racist. This is the first chance to prove it is inclusive of non-Malays and non-Muslims.

It makes no difference whether BN win or lose Tg Piai but it makes helluva difference for BN to make inroads with the Chinese voters. The pathetic economic condition favour them so focus on the economy instead of petty issue on personality.

For those right wing ultra insisting everything to be Malay or Muslim, that position will not gain them the power to serve their interest. Without power, the current situation is a glaring reality they cannot not ignore.

Without any effective effort, only God's miraculous will and divine intervention could make them realise their aspiration.

Broken promises in the political spectrum is nothing new. There has never been a winning political party that can fulfill all or some of its promises. If the incumbent govt did not uphold its election promises, so did the previous govt all the same. Voters should readily accept promises are just election propoganda very likely to be broken no matter which party makes these promises. If that is untrustworthy then where in the world can we find one we can place our trust with all our heart. Choose one despite the absence of complete trust that can bring about the good to its constituent.