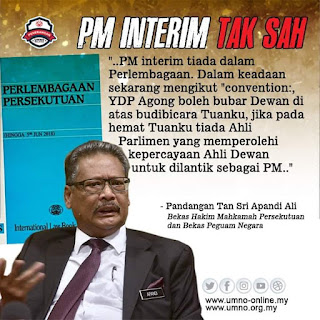 The inherent power of the King under Article 55 of the Federal Constitution allows the King to dissolve Parliament, with or without the advice of a PM.

Since there is no PM at the moment and if there no one who in the opinion of the King can command the support of the majority of the MPs from the House of Representatives. The King can dissolve Parliament.

As to the appointment of an interim PM, there is no such provision to appoint such a person in the Constitution .The appointment is not only unconstitutional but also unlawful.

This is not a situation covered by an undertaker government. There is no government.

The absence of any provision to appoint an interim PM, is further compounded by the fact that there was no oath swearing ceremony to solemnise such appointment.

Anyway there is nothing in any of the Schdules in the Federal Constitution that layout the format for the oath of office of an interim PM.

That’s why I still submit that the post of an interim PM is alien to the Constitution and thus making it unconstitutional and unlawful.