... until the fat lady sings 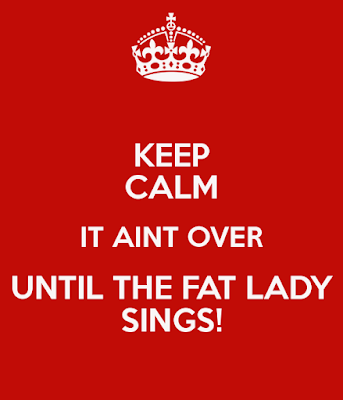 Since the last posting, "Orang Malaya taking Sabah, Sarawak for granted" on February 20th, this blog stopped commenting on the power transition or claimed new government.

Few reasons, one being too many information which does not cross checked. It means certain side not honest and telling the truth.

Another being the situation is too fluid to comment and do any analysis. Anyway, what need be analysed have been done and variables laid out. Pointless to repeat and more so, with the continuous developments.

For months, this blog anticipated the month of February for the armageddon to happen. Water in the pot have been percolating for a while. It is time to boil over. 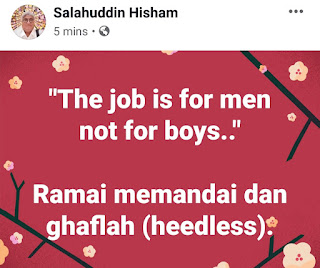 This comment this morning on FB strikes me immediately.

In this whole episode, there is too much interplay of ego, insidious motive, glory seeking, unstated intention, distrust, prejudice, presumptions, and greed, among other negativities. The consideration of the people and nation is minimal.

The narratives are generally inconsistent, self serving and could turn to change from any new development. It applies to both politicians especially MPs and media.

There are lots of stories to tell because most that is out there is not WYSIWYG. What you see is (not) what you get. More happening behind the scene and what was reported is not fully disclosed.

There are also feint and fake moves in which it is to give a perception or psyching the other side into thinking in a certain way or create wave and momentum.

This critical episode of Malaysia's politucal history is not over in a matter of days. It could take at least a week before the haze settle. It could be longer should there be a snap election.

It ain't over untill the fat lady sings. Don't ask moi how she looks like. Frankly, wouldn't know. Its a mere metaphor.

Just watch and keep asking the 4 wives 1 husband question to yourself. Please not call moi. Not picking up. Text only. Letih melayan.

Things are developing by the minute and hour. Pointless to analyse and comments.

Have lots of pop corn, kerepek, rempeyek and ubi rebus by your side. Watch and read the media. Careful with Astro Awani coverage. Too much onani.

PKR-DAP- AMANAH GIVE SABAH -SARAWAK AUTONOMY NOW IN FEB 27 2020 TO GET TO 112……GURANTEED !!!…..THEN PROPERLY PUT TO JAIL QUICKLY ALL CORRUPTED UMNO-PAS SCUMBAGS …AZMIN GANG…MUHYIDDIN BERSATU GANG…….OR SOSMA THEM ……BECAUSE THEY CAUSE DISTURBANCE TO PEACE…..Greater Crime than the VC UM protestor!!.

Careful with Astro Awani coverage. Too much onani.��

Yup, I pray that all the astro satellite burn and fall down like meteor in the sky. Full of stupid brainless news.