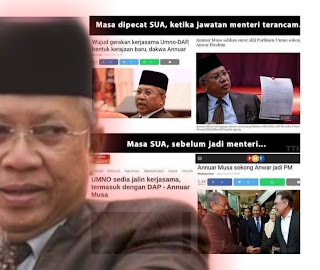 Compounding the problem is Annuar who made too many missteps, arrogantly oblivious to murmurs that was getting loud in UMNO and obviously came out as the voice of Tan Sri Muhyiddin. The list of his statement that echoed Muhyiddin and PPBM is long and no argument could convince UMNO grassroot.

Annuar Musa called for a standdown and his troops quitened down.

However, Joceline Tan is predicting the "I'm no cissy politician" will continue during the impending lockdown to be announced Monday. Her article in The Star below: 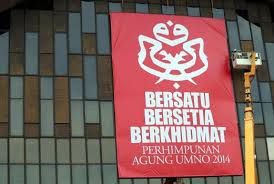 More drama ahead for Umno

TAN Sri Annuar Musa is taking a break in Langkawi after one of the stormiest weeks in his political career.

The Federal Territories Minister had to endure a rather social media kind of removal from his position as secretary-general of Barisan Nasional earlier this week.

His removal was all over social media minutes after Umno president Datuk Seri Dr Ahmad Zahid Hamidi announced it to a gathering of Umno division chiefs from all over the country.

Annuar may be out but he does not seem to be taking his removal lying down.

The Ketereh MP, known for his fiery oratory, has been firing off tweets from his weekend hideaway.

Some of the tweets were direct hits, aimed at Zahid.

Others were cynical such as the tweet “congratulating” the man who replaced him, Datuk Ahmad Maslan, for shooting his mouth off during a dialogue with the media.

Ahmad had admitted that Umno was upset with the government for pursuing graft charges against its leaders. It was one of those OMG! moments.

That was quite ironic because one of the reasons for Annuar’s downfall was that he was too vocal on sensitive issues.

Then, there was the perception that he had grown too close to Parti Pribumi Bersatu Malaysia. His calls for Malay unity and for Umno to work closely with PAS and Bersatu was out of sync with the escalating anti-Bersatu sentiments in Umno.

Annuar had acquired a reputation, rightly or wrongly, as a mouthpiece of Bersatu.

He refused to fall in line even as calls to sever ties with Bersatu reached a crescendo during the Umno division meetings last weekend.

In an impassioned speech at his own division meeting in Ketereh, Annuar declared, “saya bukan pondan politik” (I am not a political sissy) and said he would continue to speak out.

Moreover, Annuar’s claim that Zahid and a few other leaders were conspiring to form a government with PKR and DAP was getting under his president’s skin and the axe finally came down.

Some said Zahid played to the gallery when he chose to announce Annuar’s removal at the gathering of division leaders on Tuesday (Jan 5).

It was greeted by loud applause, a sign that they approved of the decision.

Supreme council member Datuk Seri Ahmad Shabery Chik said that Umno is a big and complex party and it is open to criticism from members. He said, however, there were proper channels to use when criticising the party.

Tuesday’s gathering was an important prelude to the Umno general assembly starting on Jan 30. The gathering was organised in lieu of the respective state conventions that had been cancelled because of the pandemic.

Zahid also used the session with the division leaders to quash claims that the party wants to work with PKR or DAP.

Supreme council member and Kok Lanas assemblyman Datuk Alwi Che Ahmad said the session was also for the top leaders to listen and even to be criticised.

“In Umno, you need to have a big heart, you cannot have sensitive ears if you are the leader. Some of those who spoke were very critical of the actions of Umno leaders and ministers.

“But most of the anger was directed at Bersatu. Many of them said: 'You win on our party ticket, then you betray us. Even the angels would be angry'.

“The temperature was high. Some even wanted us to pull out of the government that very day. That was the mood, ” said Alwi.

Another takeaway from the session was that some in the party think it is time to review Umno’s participation in the government.

They are uncomfortable about the way things are done especially when it comes to policy-making.

There were also some light moments in the otherwise heated session.

Datuk Yusoff Kassim, who is 80 and known affectionately as “Abang Yusof”, drew laughter when he offered to take on Bersatu strongman and Larut MP Datuk Seri Hamzah Zainuddin in the general election.

Yusoff, who has been the Batu Gajah division chief for almost 40 years, is Hamzah’s uncle. The uncle obviously disapproved of the nephew crossing from Umno to Bersatu.

Datuk Jamal Yunos, who is famous for his political antics, turned up in a songkok and declared himself as the election candidate for the Sungai Besar seat where he is the division chief.

Pasir Salak division vice-chief Dr Faizal Tajuddin said there has been a lot of confusing news that Umno is pushing for a general election in the midst of the pandemic.

“That would be irresponsible. Our push for an early general election is subject to the availability of the vaccine and an assessment of the Covid-19 spread, ” he said.

Dr Faizal said the calendar for an election is quite restricted because the fasting month begins in April while June is the Haj season.

However, a general election might be possible from March onwards.

In the meantime, Annuar will return from his break on Monday (Jan 11). He had tweeted that his removal meant that he is now free to speak and act according to his conscience.

It seemed like a veiled threat that could make things even more interesting in the run-up to the Umno general assembly. 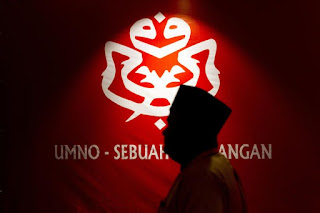 Only two months ago, a branch head in Selangor confided that his branch made a consensus to close the branch than take order from above to cooperate with PPBM. Annuar Musa is suffering from his refusal to understand and appreciate the grassroot voices.

His most vocal supporter, Tun Faisal is equally in denial. The branch is not too far from his Tun Faisal's division. Many more such stand can be heard and now most are willing to fight out in the open.

Despite all these, Annuar and his boys insulted grassroot and his sceptics within UMNO to practically insult their intelligence. No one can come out alive after behaving badly in such manner.

Annuar's only bullet to fight against his dismissal is the accusation Dato Seri Ahmad Zahid Hamidi and Dato Najib Tun Abdul Razak supported Dato Seri Anwar Ibrahim as Prime M and willing to cooperate with DAP.

He cannot reason anymore as it is not acceptable and more so debatable especially with him batting for the other side and one of his key cyberwarrior, Jalil Ab Backer admitting he is PPBM spy albeit with humour.

The Anwar-DAP support letter claim had limited impact. In the world of Malaysia's third world politics, nothing is binding and every other words and agreement has its caveat and deception.

Nothing is cast in stone till the victor is known. But these days post 14th General Election, no win can be permanent.

Annuar is not the endgame. It is not about him pursuing Zahid's position. He is capable but never acceptable.

Having a chequered history, not a popular political figure and limited upside in national party election, he is dispensibe and one of those dinosaurs in UMNO destined for extinction in order to rejuvenate the party.

Annuar is merely the face leading the fight against Zahid for the benefit of others.

Could the other person be sickly Muhyiddin?

Talk on social media is that he is being rewarded and his supporters are getting funding.

Also openly said Annuar is motivated by contract to supply CCTV for whole of KL and some waste disposal project for a certain area within KL.

Could the person be Dato Hishamuddin Hussein Onn whose name was being bat about yesterday to be appointed as Deputy Prime Minister soon to split and weaken the UMNO support?

Logically, Hisham is not likely to accept it as it will not put him in the good light. He is without position in the party, and it may held him back from getting himself back in the party hierarchy. More so, the failure of Muhyiddin government will point back at him as the archutect of the Sheraton move.

However, he is acceptable to significant number of Division Heads, and leaders in PPBM. He need to reconcile and convince beyond only his supporters.

The oppositon at the grassroot is too overwhelming that labelling of Anwar and DAP have limited impact.

It is left to Hisham. After all the analysis, manovering and lobbying, does he has the gut to commit at the crunch time?