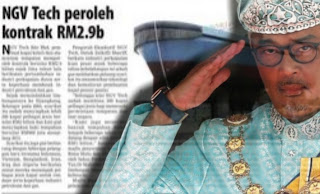 Since the proclamation of the emergency by the DYMM Yang Di Pertuan Agong Sultan Abdullah Ibni Sultan Ahmad Shah, ("Agong"), "derhaka" label have been conveniently labelled to anyone raising views not favouring the emergency measure or to seek any request from Agong.
There is no legal definition for "derhaka", but conveniently applied to suppress debate and discourse. Its a referee's red card to have final say without any dissenting view. The 1990 edition of Kamus Lengkap by Pustaka Zaman translate it as "unfaithful, disloyal, traitorous, treacherous" and derivative words could mean "treason, rebel, betrayal".
Undoubtedly, declaring emergency is the prerogative of Agong, but the fact that it is on advise and practically at the request of the Prime Minister, there should be room to raise issues against the executive branch. More so, Agong's declaration has room for Parliament to be in session since constitution is not suspended and Parliament not dissolved. Constitutionally mentioned personal liberties remained relevant. Left to Agong to make the wise and fair call.
In a 3-series posting by Melbourne-based Malaysian blogger, Steadyaku47, it is creating a disturbing undercurrent and reviving past events. The claims and accusations are serious, but it has been widely reported in the business, and shipping media as well as military watch websites.
There was no labeling of "derhaka" then. Would it constitute as "derhaka" to discuss it now?
Daring ... 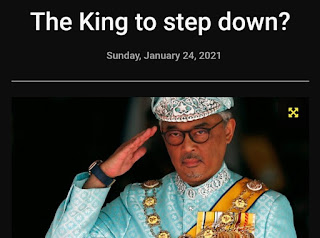 The Seremban originated, and a MCOBA otai, Hussein made a daring premonition that Agong may abdicate the throne due to conflict among fellow rulers.
He alleged there exist conflicts of interest involving contract to NGV Tech to build 6 corvette for the Royal Malaysian Navy, revive contract from Syed Mokhtar's Pos Malaysia, APMM and emergency deemed opportunity for scratch-each-other's-back arrangement.
Those are serious accusations against Agong and Hussein need to do more than the usual justifications. More so, those are not current allegations.
Apparently, the Pahang royal family direct interest linked to NGV Tech was widely reported in the business and shipping media as well as military watcher websites. A 2015 Edge Online reported:

NGV Tech has partnered Naval Marine Engineering & Logistics Sdn Bhd (NMEL), which lists the crown prince of Pahang Tengku Abdullah Sultan Ahmad Shah as a major shareholder.
“NGV Tech is back with a stronger shareholder set, which includes the royal family of Pahang. With the new shareholders, NGV Tech, through NMEL, will be a strong contender for the contract to supply the corvettes to the RMN,” says an industry observer.

Obviously ... but NMEL brought in South Koreans into the partnership.

According to a Yonhap News Agency report on Nov 24, 2014, South Korea’s Daewoo Shipbuilding & Marine Engineering Co (DSME) has an order from the RMN for six corvettes to be deployed from 2018.

Three of the patrol vessels will be built in South Korea, while the other three will be assembled here, in a partnership with NMEL, which is the local agent for DSME.

Moiz is linked to Bandaraya Development Berhad and background known to be linked to the old Multi-Purpose Holding Berhad.

The only name similar to the 35% shareholder of NMEL found on Google are University lecturers. Its a work in progress. Steadyaku mentioned here that one 35% owner of NGV Tech (not NMEL) is Agong's or Gading Sari. 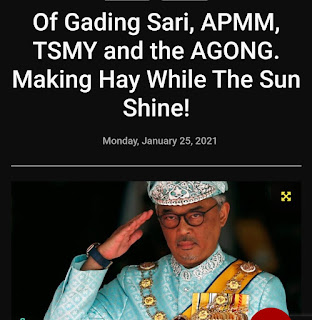 The Edge report stated that

NMEL states on its website that it is in partnership with NGV Tech, which is the main contractor. NGV Tech will provide facility management — the infrastructure and immovable facilities for shipbuilding, ship repair and maintenance activities at its planned shipyard in Tanjung Agas, Pekan, Pahang.

If so, than NMEL could be "lending a hand" to NGV Tech, which is a Bumiputera shipbuilder facing  financial difficulty, and bringing business to Pekan, Pahang.
Any direct interest will only surface in any subsequent corporate restructuring exercise. By then, it will confirm whether it is a temporary bailout or permanent takeover.
On record, NGV is a shipbuilder and have been a contractor to the Malaysian Navy. It has been around since 1992 and one of the key player in the local maritime industry for military purpose. It started out as purpose built shipbuilder for oil and gas industry and also received overseas order.
To build each corvette, it would cost the government RM600 million, and six would mathematically total  RM3.6 billion (old news clipping mentioned as RM2.9 billion).
It certainly raised eyebrow considering that NGV was unable to complete building two training ships for the Navy signed at LIMA 2011 for RM294 million. Initially the contract was speculated to be worth RM50 million. The two ships went into Bank receivership. NGV have had few cancelled order then.
The grumbling question: Who initially secured the 6 corvette contract: NGV or Daewoo or NMEL? Who finally secured to complete it?
Gading Sari Aviation 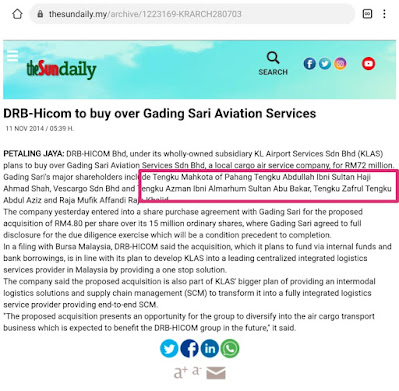 The facts need further clarification on Steadyaku part, before concluding as "making hay will sunshine."
Steadyaku's made another allegation below:

Gading Sari Aviation Services Sdn Bad also had a contract with Pos Malaysia which was terminated on 31 March 2008 but, Pos Malaysia received instructions from the Deputy Prime Minister’s office (then Najib Razak aka Kepit Man) to reinstate the contract. Why ah?

That claimed turned up first on Malaysia Today in 2008 here. It was the years Raja Petra was assigned by his then handler to stop Najib from rising to be PM to replace the destined to fall Pak Lah. It  culminated into the false accusation Najib murdered Altantunya.
But then Sundaily old report in 2014 claimed Gading Sari is sold to KLAS under Pekan operational based DRB-Hicom. [Read Edge Online here.]
To recap, contract allegedly given and then upon cancellation, it was re-awarded as RPK and steadyaku claimed at Najib's behest. Subsequently, another Syed Mokhtar company took over the company for RM72 million. It raises all sort of speculations.
On RPK's claim that Gading Sari Aviation had no aircraft when it received contract from Pos Malaysia in 2008, his insider hardly revealed anything to support there and there is not much going from this website here. How did it received the earlier contract then?
After more than 12 years, ponder how could Securities Commission approved such purchase and auditor verified the value of RM72 million?
If they do, then there was a serious hanky panky going on. But it is not government but private sector affair. After all, the issue is too long ago.
As for the APMM allegation, let it lay first.
Take it seriously 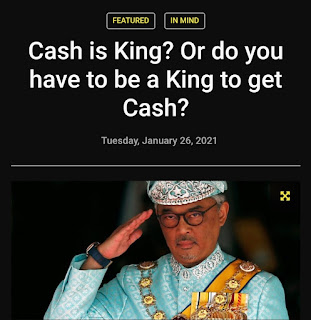 The allegations need to be justified, but cannot be ignored by the palace. Istana Negara's media team and Dato Bijaya, Dato Ahmad Fadil need to answer for it, particularly the still on-going corvette contract, which originally should be delivered in 2018.
They need to protect the dignity of the institution in this politically sensitive and delicate times. Little Annie, who adores the simple acts of Agong to win the heart of the people, insisted the media team not make the same mistake of the pre-GE14 UMNO.
The use of "derhaka" to squash murmurings should be the last thing on their mind. Though few opposition friends had a changenin attitude to hands off on royal issues, the palace need be aware of the Gerakan Subversif Republik Malaysia.
The moves by Wan Ji operating from within DAP and inate desire of Amanah grassroot to dismantle the royal institution by the next few general elections are open secret. As Rocky Bru highlighted, Steadyaku penned off his posting here with the words, "Daulat Tuanku? I think not! Enough said!
------------------------
Returning back to the emergency, the Malaysian Covid situation is not as bad compared to the top worst countries that called for emergency.
For all practical reason, emergency was applied to keep a minority government alive because the steps taken were merely MCO. The economic effort is one dimensional. It hardly addressed the more significant problem of disrupted life and horizon limited to Covid.
As for politics, there is no problem without any choices or options. The unacceptable Prime Minister should vacate his seat and a solution or compromised formula seek. The country could keep going with the presence of Agong and loyal civil service. That Agong could have done.
Article 150(8)(a) and (b) of the Federal Constitution mentioned the emergency cannot be questioned in court. But does seeking Agong's grace to reconsider the emergency and seek for Parliament session to be called for sitting considered as "derhaka"?
Perhaps the act of "derhaka" need to be constitutionally defined and not be applied at will according to cultural interpretation or political convenience. Malaysia practises democrasy or perhaps, guided democrasy as P. Ramlee used to described in one of his cynical comedy film.
at 1/28/2021 04:11:00 PM