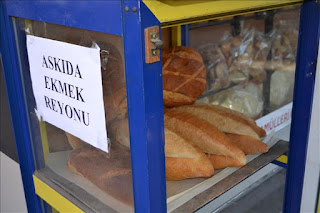 One hundred and forty bakeries across the area placed baskets and posters in their premises to be filled with paid-for loaves for the poor.
Residents pay for additional bread when shopping and leave the bakery. The baker than takes the sold or 'hanged’ bread' and leaves it in the charity basket, placed discreetly near the entrance of the store. 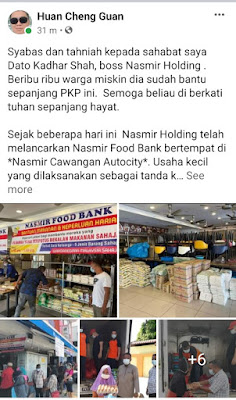 A similar phenomenon is developing in the Klang Valley and urban centres as public contributed food to Food Banks established.
Those in need would take the amount of food needed for their requirement. 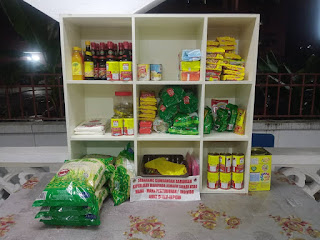 It was the Food Bank established at our nearby surau in early last month that inspired us to get involved.
So happened, the idea of mosques having food banks for the poor in Turkey began at the start of Covid 19 pandemic last year.
Our first batch of packaged dried anchovies, Enaq sweet soy sauce and Adabi cans of sardine was all taken up overnight. It was indicative of a problem emerging.
Within a month, one could visibly see long queue for food gift in certain areas.
Despite the abundant choices of food in Malaysia, there are Malaysians in the Klang Valley denied food for days, dependent on food donated by neighbours and living in hunger.
At the start of the Covid problem in Klang, few hundred families were known to be on a single meal a day. And, there are those on the verge of committing crime for survival as this Facebook accounted a real event.
Unaware of the situation on the ground, certain ruling parties and supporters were in a state of denial and opposed the campaign. One state MB made it a policy to deny help to homes waving white flags.
Raja Petra took potshot at our "Raise the Black and White Flags" posting. He lives in England. We at ground zero in an area surrounded by PPR. Can he feel the situation from googgling on the Internet? 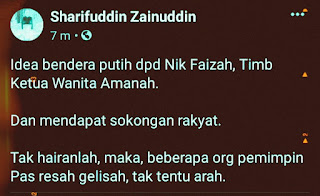 Politics taking precedent over humanity.
The call to raise white flag may have been mooted by a member of the opposition party, but it is an initiative majority of Malaysians can relate to.
Possibly the two ruling political parties are embarassed by the perception the white flag campaign created of the government. It caught the attention of foreign media and received coverage from BBC, NY Times, and France 24.
The white flag signify rakyat in distress and lost hope from resigning their fate to the already burdened government.
It is about rakyat seeking help from other rakyat. Perhaps, a self help society will not be overdependent on politicians. That may have worried them.
However, instead of the old school politics to trivialise it, they should have taken a ride on this emerging socio-economic trend.
Altimet 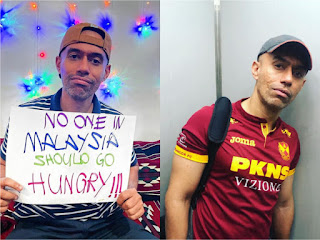 Unlike the attitude of these political animals, rap singer and composer, Altimet encouraged distressed rakyat to fly the white flag in his Instagram.
It enabled him and his partner Pitt to identify those in needs. To them, its a curse to not care for their neighbours.
Every Friday, Altimet and Pitt would drive within their neighbourhood, Hulu Klang and Gombak between 2 pm to 6 pm to lookout for white flags. 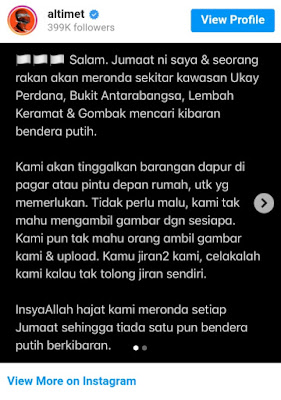 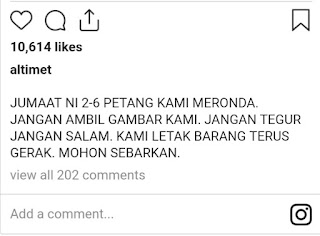 Where white flags are spotted, they would deliver the food or hang them at the gates. No photo, and no publicity. Give and leave.
No publicity stunts to feed a child with the father next to her unnaturally holding a guitar. Its breaking the health SOP. Such publicity embarass and degrade the recepient.
Families ashamed to fly the white flag can contact them directly. 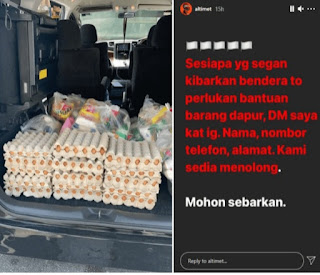 Altimet and Pitt have been covering areas beyond their neighbourhood as far as the PKPD restriction allows in Sungai Besi.
There have been numerous sad and tearful stories of family fallen on hardtimes. They ran out of money but not able to seek employment or do small businesses due to lockdown restrictions.
Unlike DBKL, which took a more caring and accomodative attitude towards petty traders during the pandemic, local authorities in Selangor are unnecessarily hard and mean on these roadside businesses.
Those keen to support the efforts of Altimet can donate to the account of PERTUBUHAN KEBAJIKAN KUALA LANGAT (MYKUALA_LANGAT) at RHB 26263400000158
To contribute food, they can be contacted directly via e-mail at mykuala_langat@yahoo.com or call Pitt at 013-3888868
Items much in need, but seldom contributed are baby milk or food and pampers. Without milk, babies of some poor family are being fed with tea or protein drinks.
Someone could take up on the idea of a Milk Bank.
Political parties 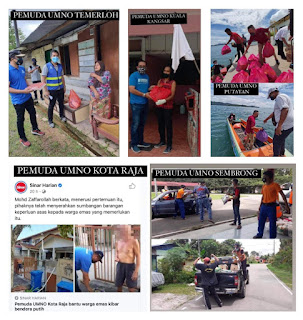 Political parties, especially the established and with large member base, have outfit and operations to undertake such initiative.
When this blogger got involved last month to contribute food items, the first step was to contact the UMNO division headed by Dato Johari Gani. It is for distribution to the area within our work place.
There will always be the no class ones merely seeking publicity and political mileage than sincerely assisting the poor and downtrodden. Generally, political parties have the manpower and established network to effectively undertake such task.
Johari's Titiwangsa Division has a serious set-up which regularly assist few thousand families irrespective of race, religion and political persuasion.
Their familiar bluebags are usually filled near the brim and not merely big boxes but quarter filled.
It is not about Johari's affordibility. There are others contributing too. Coming from a humble beginning from the Kg Pandan squatters, he has the empathy and passion.
For the rest of us, do what we can within our means. The first step should be to take concern of our own neighbours.
Rakyat jaga rakyat.
at 7/11/2021 11:44:00 PM