RM2.4 billion commission for ventilator? Azmin's portal must be joking .... 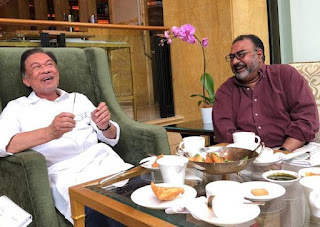 This picture of Dato Seri Anwar Ibrahim laughing with his adviser and confidante, Dato Vinod Sekhar should be the appropriate headline for this posting.
Azmin Ali-funded portal, MalaysiaNow claimed to have obtained documents showing Hungarian government agreed to pay Vinod a total of US$559,600,000, which is equivalent to RM2.43 billion for a May 2020 contract.
If the documents are in their possession, they would have shared it online. That would have been more meat for a character assassination on Vinod or Anwar to devour.
Why then do MalaysiaNow need to still build-up sentiment and doing a drama when they could simply publish the documents?
As news portal, they are in a more credible position to get away with such tacky storyline than bloggers or social media writer.
Unfortunately, readers are more discerning these days that even mainstream media can't spin the same yarn without being asked on social media for proofs to back any claims.
More so, the so-called raid on Vinod's office happened 2 weeks ago at the time this blogger was at Bangsar Shopping Centre. Did MalaysiaNow just found out about it over the weekend?
MalaysiaNow and Malaysia Today have been spinning the Hungarian ventilator conspiracy of Vinod throughout July to August, but then the story died off.
Ever since, there have been no development in Hungary, in which the issue was drummed up by Hungarian opposition in the same Malaysian Reformasi psywar manner.
Suddenly, the 2-week late report today and it went viral into few WA groups and private messages. Azmin must be funding Latheefa Koya's brother, Abdul Rahman and MalaysiaNow well to afford an effective viral team.
Portal of cheap trick
MalaysiaNow has a reputation as Azmin's character assasination portal that is setting its eye on Anwar Ibrahim, Najib and Zahid Hamidi. During the Melaka state election, they played a role to create a negative perception of Najib for acccepting an entitled home for former Prime Minister.
Unfortunately, the character attack on Najib was a strategically amateurish ploy of Azmin and Perikatan Nasional.
The housing issued orchestrated with the involvement of Tun Dr Mahathir, PH leaders, and PPBM-proxy Tengku Zafrol actually failed miserably and backfired. The election result is a manifestation of their failure to hit the wrong target.
Azmin failed as Economics Minister and now as International Trade Minister. His only skill is politics, but judging by MalaysiaNow, he is failing too in the dirty trick department he was once known for.
MalaysiaNow is obviously attempting to prop the issue into a scandal of 1MDB preportion. But they are 2 weeks behind.
It is not so difficult to get authorities such as so-called NFCC to visit one's office. A joker, possibly linked to MalaysiaNow, could make a report and NFCC officers visit the office to request certain documents and few files taken away.
If LHDN and MACC visit to ask questions, what they wanted was provided and that was it, then Rahman Koya should go for medical check. He is suffering from some illness to blow things out of preportion. That is hardly a raid.
What really happen?
That is for this blog to already know and readers to find out.
It looks to be a cheap attack on an ally of Anwar.
If government have reasons to pursue Anwar, they are more sophisticated than this. He is already shooting his own feet. His political opponents do not need to resort to such.
Unconvincing spin
It is hardly a raid but MalaysiaNow described it as multiagency raid involving several agencies. A typical reporter's exaggerated play of words.
NFCC is now an agency under the PM Office which involves several agencies in the same manner NRRET was before.
For the commission to be RM2.4 billion, less to the RM2.6 billion 1MDB alleged money that went to Najib's account, the ventilator sourced by Vinod from China destined for Hungary must be in the tune of two digit billion ringgit worth.
According to Hungary Today report here, only an excessive 843 million Euro worth of ventilators were bought, which translate today to RM4.03 billion. Another unconvincing spin by MalaysiaNow.
When this blogger was told of the RM2.6 billion 1MDB alleged money went into Najib's personal account, it was not believable for Najib to do so. It was till a Putrajaya high official met this blogger and the late blogger Flying Kick (Al Fatihah) at a Masjid in Putrajaya to explain before it was believed.
This time around, no appointment for prayers at any Masjid anywhere. But there was a phone call. Again, that is for this blogger to know, but both readers and MalaysiaNow to find out.
Show the documents to be believable.
at 11/29/2021 03:21:00 PM