Tuan Ibrahim should answer for the flood devastation 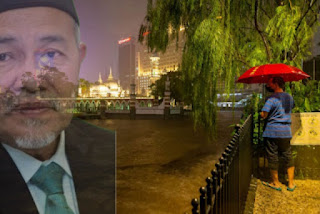 As of Christmas Day, AFP reported death toll of 46 for the flood catastrophe hitting six states in Peninsular Malaysia, including unexpectedly Kuala Lumpur and Selangor.

Three days earlier Al Jazeera reported death at 27 and affected victims an estimated 70,000. With Pahang and East Coast only begin to get submerged under water, the casualty can only be expected to get higher.

However, the cost of the flood has not been announced, but estimates floating on social media ranged from RM10 to RM20 billion. If the economic impact and ESG fallout to the country's FDI considered, a 5 times multiplier could translate to at least RM100 billion.

Being the most developed and centre point of the nation, the financial burden for Selangor and  Kuala Lumpur, which His Majesty Agong described as similar to the great flood of 1971, could likely be phenomenal.

The weather is God's will. Federal and Selangor state government less than desirable preparedness and response have been extensively, openly and heavily criticised on social media. Grumbling on the government assistance to the largely B40 segment affected only began. If the cause is due to negligence of government department, it will grow louder.

Few FBers raised the issue early, but media reported the poor dam management by  Department of Irrigation and Drainage (DID) only 2 days ago.

The department falls under the Ministry for Environment and Water (Malay pseudonym KASA) and the Minister in-charge is Dato' Tuan Ibrahim Tuan Man. 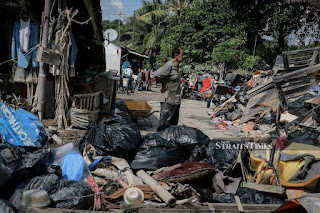 NST reported a flood victim blamed "lack of proper coordination between the National Disaster Management Agency (Nadma), Selangor Department of Irrigation and Drainage (DID) and the people on Dec 19 contributed to the large scale devastation wrought by the flood."

The victim blamed Selangor DID for releasing the water without prior warning to the affected population. He is seeking accountability, responsibility and compensation from the authority. He suffered RM100,000 worth of losses and another victim living from hand to mouth estimated loss is between RM50,000 to RM60,000.

There was intermitent rain but continuously on Friday and Saturday. By Saturday morning, the devastated areas was under a sea of water and water flow raging.

A lady Project Manager living in one of the hilly homes had the phobia of cries for help heard, but nothing could be done. Situation was too dangerous

Where mainstream media report lagged, social media was responsive and immediate. On Dato Hamim Samuri's FB, his attempt to explain the weather situation was rebutted by a commentator demanding explanation for the Ulu Langat river water level rise by 1 meter in 15 minutes.

As early as December 21st, FBer Zam Yahya highlighted that the blame for the devastation lies with the pathetic management of the Semenyih Dam by DID. 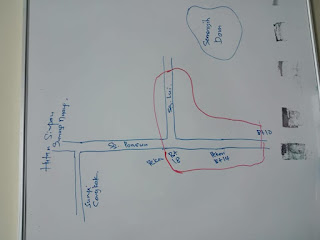 From eyewitness account, Zam Yahya used the above diagram to more clearly explained why water released by the dam in Ulu Langat flooded Pekan Batu 18 Ulu Langat all the way to Batu 10 near Cheras, but no flood for Sungai Congkak.

The potentially affected area by the river should be alerted with sirens or SMS warnings. Public should be given sufficient time and not indiscriminately release water at will. DID should be fully aware of weather forecast and acted pre-emptively. But they did not!

According to a decorated and ranked police officer living in one affected area, this issue have long been raised by the local community to DID, but they were indifferent.

Ridiculous excuses such as not wanting to awake and alarm the community were given. This time they went beyond waking the neighbours, but ruined their lives.

Poor management of the Klang Gate dam may have explained for the sudden water rise that flooded the Masjid along Jalan Tun Perak.
In a video teleconference by PPIM, an eyewitness accounted the water rise at Sogo shopping complex the Saturday night. His conspiracy theory on the reason situation got out of hand is rather overstretched at the moment, but the speed the water rose was fishy. 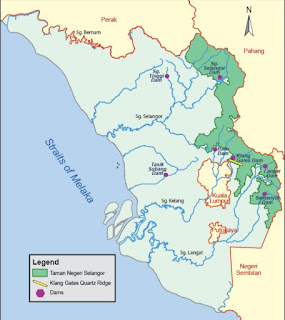 Looking at the map it could be due to the Klang Gate dam. It points to the same question of why was water released at one go? 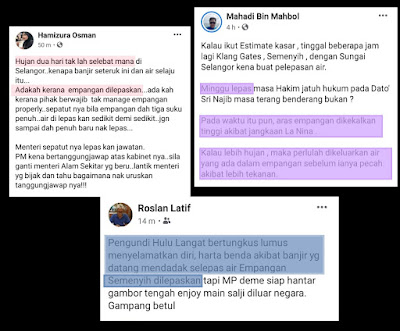 FBers realised the rain was not heavy for such massive flood and it was due to the dam water release. Mahadi Mahbol claimed water was being stored in preparation for La Nina drought, and he expected water would eventually be released.

Perhaps he was being sinister because there was no global La Nina warning, and the Metrological Department forecasted continuous rain for East Coast. Few days before the massive flood, Selangor and Kuala Lumpur was included in the warning list.

The later concern was should rain continue for few more days there will be the risk of other dams nearing full releasing water at one go. 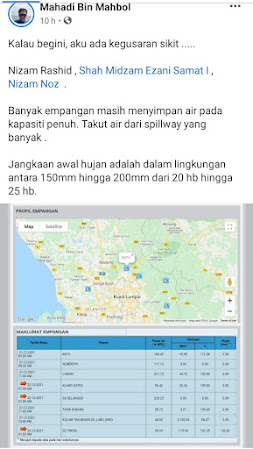 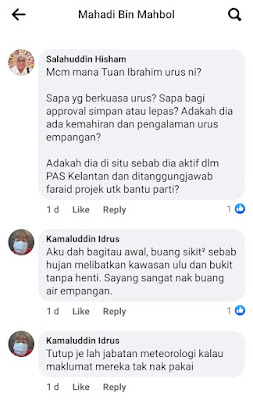 The competency of the management at both the Ministry and operational level is suspect. To say they failed to prepare, it may not be entirely true. DID did a full scale emergency drill in February this year. Still, when it warrants for the asset deployed and procedure invoked, they screwed up.

As at today, the water level at Ulu Langat dam has reached dangerous level and certain area flooded again. If rain returns again, the problem will repeat itself. Will NADMA as claimed and DID capable in handling the second wave?

The problem at Taman Sri Muda still relate to DID. Water was not flowing out. Ranhill had to assist with "portable" water pump. Otherwise, the rescue and subsequently clean-up could not commence. 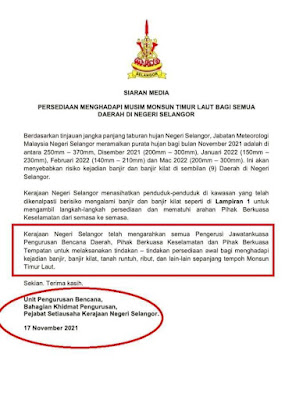 There have been widespread problems of broken water pumps under the administration of the Selangor state department.

The Flood Disaster Management for Selangor issued a statement on November 17, but MB was busy playing Candy Crunch on his handphone and Selangor state machinery was unable to proceed. So blame Tan Sri Noh Omar? 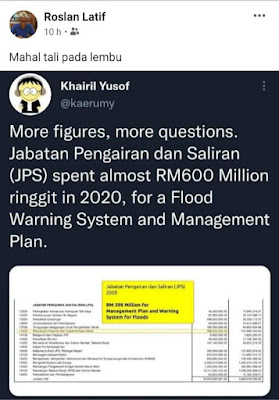 Imagine DID claimed to have spent for Flood Warning System and Management.

Obviously it failed to be delivered and the announcement was merely to look as though everything is OK.
And, suspicion arised. 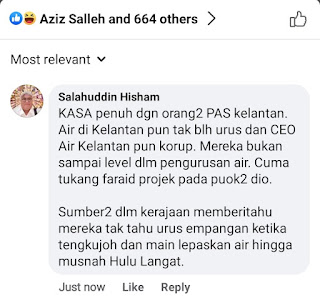 The prevalence of political expediency and compromise on competency is worrisome.
Negligent clergyman 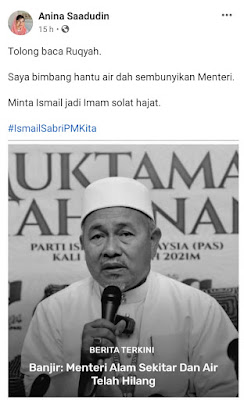 Through all this, Tuan Ibrahim is no where to be found. He left for Mekah and Medina to do umrah. With DID failing to pre-release dam water before the rain storm and evade flood, he cannot be blamed for unable to preempt situation and flew off before the flood.
However, it is most infuriating that he issued a statement in absence to warn of the flood on Saturday 18. It is as though his Ministry communication staff deceptively covered up his absence and anticipated public rage over his absence and negligent dam management.
At the same time, Harakah was doing damage control to promote his RM10,000 donation. 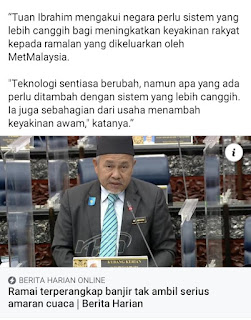 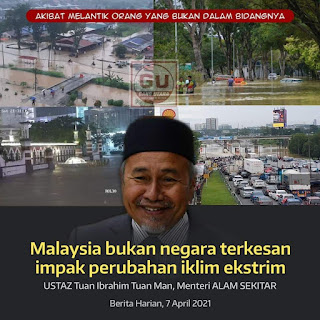 The pious Tuan Ibrahim does not shoot his mouth at will, but being technically challenged, he is capable at allowing himself to read scripted lines without sufficient understanding the subject matter. Something prevalent in the post GE14 Ministerial cabinets.
Since the flood incidents in Kota Tinggi-Segamat and Gua Musang-Kuala Krai many years ago, freak weather have long been a global conversation that TIME magazine put up as front cover.
In Tuan Ibrahim's defense, one informed Ulu Langat resident said the DID couldn't care less attitude towards the local population happened long before he was appointed Minister.
Nevertheless, there are sufficient reasons and heightening public anger to demand him to answer for the failure of DID and his Ministry under his watch. The public is waiting and will keep waiting. The lawyers too.
The latest media reported he and five family members are found positive for Covid 19. Coincident or convenience, lets pray for their wellness.
* Updated: 28/12 8:00 AM
at 12/27/2021 06:02:00 PM

Only the 'Devil' can help this country!