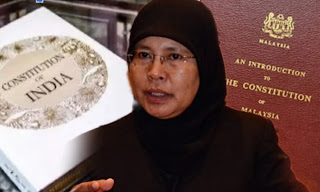 He questioned who is encroaching on whose jurisdiction.

A member of the bench called to share the concerns of judges in the High and Appellate Courts with the direction Tengku Maimoon and her friends are taking.

One of her friend is lobbying a female member of a royal family to be appointed President of the Court of Appeal.

What is the ulterior motive of  Tengku Maimoon to pepper the interpretation of Malaysian Constitution with Indian indigenous spices?

It is understood from the former DPP's explanation that it is not applicable for Malaysia, in which Federal Court is not ranked more supreme than Parliament or Executive.

What is the Basic Structure Doctrine of Indian Constitution?

There is no mention of the term “Basic Structure” anywhere in the Constitution of India. The idea that the Parliament cannot introduce laws that would amend the basic structure of the constitution evolved gradually over time and many cases. The idea is to preserve the nature of Indian democracy and protect the rights and liberties of people. This Basic Structure doctrine of the Indian Constitution helps to protect and preserve the spirit of the constitution document.

Is Tengku Maimoon and friends gradually evolving the basic structure into the Federal Constitution?

In an FMT report dated June 3rd 2021 here, the reporter noticed the strange occurence of the CJ in the minority in five of her then recent judgements.

Yet her address to judges then called upon them to be loyal in which she defined as:

“The loyalty that is expected from you is allegiance to defend the principle of the separation of powers, independence of the judiciary and uphold the rule of law."

Was it her early signal to redefine separation of power to turn the court to be above other branches of government and possibly Monarchy, or in other word, adopt basic structure?

The member of the bench highlighted that there is a precedent set to reject basic structure in a judgement by Ali Hasan, the late Sultan Azlan and Wan Sulaiman in the case of Loh Kooi Choon versus the Government of Malaysia.

An extract from Tun Hamid article below:

In the meanwhile, Lukman Sheriff continued to educate the public on basic structure albeit in Malay in his FB here.

Bar Council, the promoter of basic structure, is supposed to hold their EGM as an act of defense against the criminal investigation of Nazlan Ghazali by MACC.

It is not the norm for the usually critical Bar Council to show support of Tengku Maimoon's prejudicial defense of Nazlan Ghazali. It is indicative of their collusion.

A clear sign judiciary is deviating away from past practises set through established precedents.

And the cartel in Bar Council is in-cahoot.