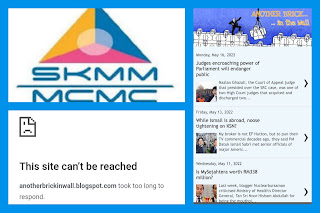 On Sunday evening, this blog was uploading the article entitled "Judges encroaching power of Parliament will endanger public".

Its on a legal subject which was a non-lawyer layman commentary refering to FMT reports and the FB of Lukman Alias.  The reports and FB postings are not censured and still available.

Upon consulting few IT savvy whizz kids, they suspected SKMM block this blog by making it difficult to access.

Few friends with good system or proprietary App could still open it. So a denial will be expected.

Nevertheless, the legal article critical could not be the reason SKMM block this blog totally from public access.

Prior to the legal article, it was a posting entitled "While Ismail is abroad, noose tightening on KSN". This posting could be a possibility but it is not a specific accusation against KSN.

It was about Zaharin Yasin's expose on land deals in Kuala Lumpur which he implicated the DG for PTG. Since KSN chair the Federal Land Commission meetings, it raised the question of whether Zaharin was targeting KSN.

There was also the issue of MARA Corp impending prosecution in which KSN is a member of the Board. Still Zaharin is not blocked.

Before that, it was an article which posed the question of whether "Is MySejahtera worth RM338 million?" sum to be paid to Entomo.

Prior to the MySejahtera posting, it was the article entitled "KSU to be removed for Keluarga Malaysia's Tablet supply re-tender?"

There was no allegation against Minister or special officer or secretary. It was merely sharing a gossip by some sore loser in a tender which was not substantiated. The Ltlle Bird was suspicious, but there is no document to support.

It is definitely not expected to be true or even possible unless the KSU was transfered due to that tender or MOF actually took over to do a re-tender.

Goes without saying that it is not true yet and the posting said so. It was really hoping that not the same problem with past PC giveaway program repeating.

Wonder which is the issue that warrants for blocking this blog. If there is a response, we will publish or the least, post a commentary to any response and indirectly readers are aware of the denial.