What happened to the great Civil Service? 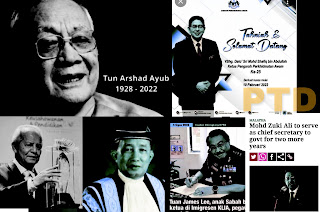 On June 14th, Tun Arshad Ayub passed away. Yours truly was able to attend and participate in the jenazah prayers ritual to bid farewell to this great man.
The Star reported it as the passing of an education icon. While NST honoured him as a revered educationist. Looking at his resume at ITM (later upgraded to UiTM), UM, Inti College and likely other educational institutions, he more than deserve such accolades.
Arshad's tenure as ITM's first Director (1965- 75) was short. Despite being strict and unorthodox in his approach, students endeared themselves to him and appreciated his intention. They protested when he was transferred out by then Education Minister, Dr Mahathir to Bank Negara following the Baling protest of 1974. It was intended to curb student activism and pave the way for the introduction of AUKU.
Arshad was a member of the Malaysian Civil Service (MCS). He had a poor start in his first initial attempt for university education. Despite not academically up to the mark by the standard of universities today - not hold a doctoral degree, the administrator left an indelible mark on the life of students and the educational institutions he served.
Civil servant such as Arshad implimented the task laid upon them despite the insurmountable limitations at the time. On a smaller scale, the first Principal of the expansive 50-year old MRSM system, Dato Dr Jamaluddin Abdul Hamid is no lesser but another version of Arshad.
During the days of Tun Abdul Razak, Malaysia's second Prime Minister and father to Dato Najib Razak, he was in a hurry to put in place the path for the newly independent nation. Civil service were tasked with a major role to implement the development plan for the young nation.
The two mentioned individuals were living proof that the humble "kami yang menurut perintah" are capable in their assigned task to execute the plan for Malaysia. All it took were seriousness, single minded dedication, and commitment.
Alas today, the culture of greed, corruption and unabated self serving pursuit have pervaded throughout the institution. Blame could be levelled at the weakening establishment, decline in social morality, intrusive politicians, and even the dominant Mahathir, but the reality is the great implimenters are a dying breed. It is something to worry because the government machinery is less than reliable.
Arrogance or indifference 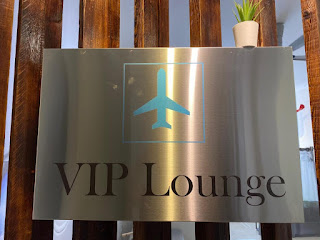 This blog took too long to express its dedication for Arshad. It needed a strange incident on August 4th involving high level individuals in the civil service to finally put words to thoughts.
The truth is not for certain but the conversation on social media from either the pro- or con- side and market gossip behind the personalities paint a poor optic of the Malaysian civil service. It is indicative that the creme de la creme and elite Pegawai Tadbir Diplomatik (PTD) of the Malaysian civil service is in a deplorable state. 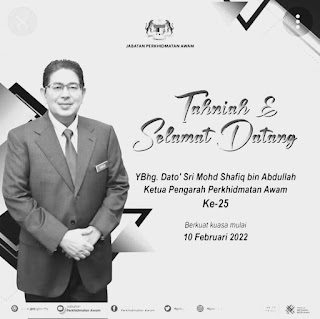 Rafi Awang Kecik FB status on  August 4th here described the mentioned incident at the KLIA on August 3rd a day earlier. The new Director General of the Public Service Department (KPPA), Dato Mohd Shafiq Abdullah was at the KLIA VIP Lounge heading for Vietnam that morning.
There was no Immigration Officer stationed there so he was not getting service. 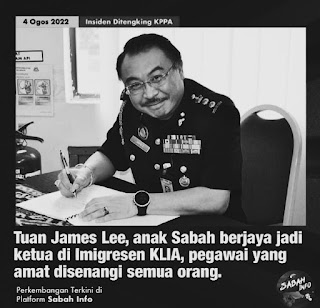 Shafiq called the Chief Operation for Immigration and Head of the Assistant Enforcement for KLIA, James Lee and allegedly some harsh words uttered. The Sabahan James Lee was intimidated and felt he was being bullied. Quite the usual reaction, the Sabah social media immediately over react into an us against them mode.
Underlings getting a tongue lashing comes with any employment arrangement. However, the reaction is out of the ordinary. Shafiq was accused of being rude and arrogant. 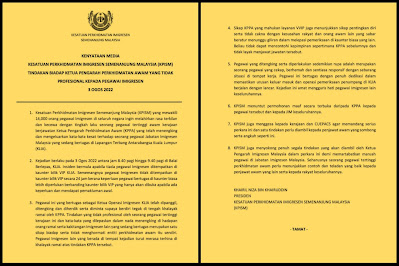 It attracted the reaction of the 14,000 members Immigration workers union for Peninsular and adverse statement issued by its President on August 3rd. 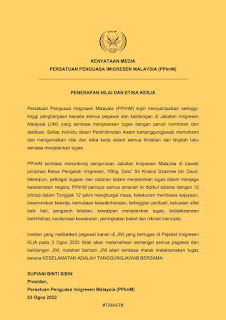 The same day the association of Immigration staff issued support with the union. 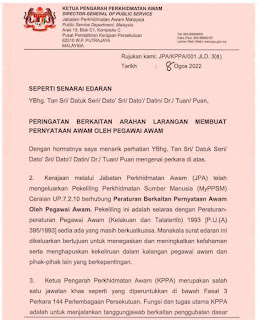 Five days later in the midst public attention, the KPPA via PSD issued a gag order on August 8th. It gave the wrong impression he intended to zip up dissenting voices and was misinterpreted as public servants should accept abusive treatment from their superiors.

KLIA sources swear CCTV showed no unpleasant incident. According to FBer Zaharin Md Yasin and verified with sources at the airport, James was rude and disrespectful. Despite that, Shafiq was perceived as flexing his muscle.

Apparently supporters of Dr Mahathir defended Shafiq, and published his denial made to respond to the union outcry on August 5th.

It supported Rafi's suspicion of him being a Mahathir man and slotted to be Chief Secretary to the Government. He was Mahathir's senior assistant in 2002 and joined Protocol Division at PM Department in 1992. The political conversation is Mahathir's political Modus Operandi is to instigate retired servicemen and serving civil servants against UMNO. Like all happening in the country, there is always the political side to it.

A major weakness of the civil servant today is their willingness to kow tow to politicians. Instead of professionally guiding politicians on good governance practises, and resisting their misadventures, civil servants showed them the loopholes and succumbed to allow Civil Service to be politically exploited.

Putting aside the politics, this blogger is prejudicial against KLIA Immigration. Myriad of sources have long claimed Immigration is complicit in human trafficking, and illegal immigration activities. KLIA immigration looked the other way to the secret passages into the country.

They operated as a fiefdom beyond the possible surveillance of law enforcement. Arrogance, over protectiveness and defiance are manifestation of the widespread abuse of power, bribery, and tolerance to unlawful activities.

The allegation against Shafiq was not believable initially. In him lies the hope to take action and improve public service quality. Prior to his appointment as DG of PSD, the 58-year old Shafiq was the KSU for Ministry of Health and he managed to return order to the Ministry.

It got out of control during Dr Adham Baba as Minister. International praises in the early part of the effort to combat Covid 19 gone into the head of DG Tan Sri Noor Hisham Abdullah. He became bold, dictatorial and disrespectful of the hierarchy. It is heard there were widespread indiscretions. However, whistleblowers held back so as to not demoralise tired front runners.

Shafiq stamped his feet and was appreciated by the Minister. However, the moment pandemic ended and it was business as usual. The manner few hospital system contracts were awarded does not serve the interest of MOH and out of sync with industry practise. The buck stops at Shafiq and his integrity is in doubt.

It turned out he was only a pawn in Khairy's divide and rule strategy to control the lucratively budgeted MOH. Insiders claimed he was transferred out from MOH for being in the way.

Few days after the reactiom from Immigration union and staff association, Chief Secretary to the Government, Tan Sri Zuki Ali announced convening a special committee to probe the allegation on August 7th. It was a day before Shafiq made the gag order. One could speculate it as an angry reaction or intended to bring temperature down. 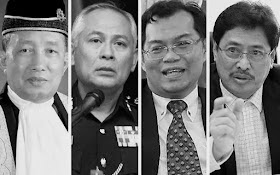 For a rather petty issue, the decision to call for a high powered probe led by the Attorney General and involved Inspector General of Police, MACC Chief Commissioner, and Auditor General was suspicious. One cannot help but agree with Teresa Kok that it is a waste of time. PSD and Immigration could discuss the necessary action for the non-compliance. It makes no sense and few senior civil servants expressed their dismay to the media.

It is an open secret that the Immigration are territorial and uncooperative with other law enforcement agencies. Have they became so dominant and influential that they could defy PSD and dictate KSN?

Over and above the concern on inefficiency, corruption, and improper conduct, a breakdown in the chain of command is more worrisome. That is till the media highlighted Zuki will turn 60 on August 11th and will be due for retirement. 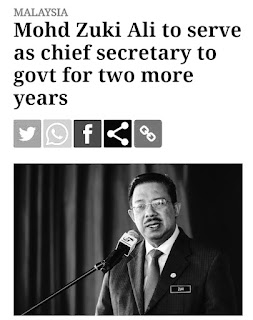 Then came the announcement on August 11th that his term as Chief Secretary to the Government is extended for two more years. In two years, Shafiq will be due for retirement. The immediate conclusion drawn by observers is that the probe was put together to deny him the KSN post.

Shafiq could be fixed up in the same manner one former Johorean KSU, the most senior in line, was fixed with a khalwat charge for being in close proximity with his lawfully wedded second wife at a hotel in Johor Baru decades ago.

It was then said to enable a new KSU, which was promoted up the ranks at an express pace, to fill up the KSN post. He happen to hail from Kedah and later became the longest KSN to serve Mahathir.

Zuki used to serve Agong's palace and is not known to abuse his position. However, he is the Chairman of the Federal Land Commission and that attracts speculation.

Though land acquisition act used will fix land prices for Kampong Baru, Kuala Lumpur at RM400 p.s.f., whispering among Chinese businessmen is Banks are willing to finance at RM2,000 p.s.f. That is "duit atas angin" that can easily make any honest KSN weak at their knees. It too tempting, and off course, politicians will conveniently be blamed.

Every event that unfold thus far points to several possibilities and explanations. To interpret the incident beyond the isolated confine, it could be an over reaction. Nevertheless, the long and short is one can't help but conclude the "Civil Service only take care of itself", to take a quote from the sitcom Yes Prime Minister than to serve the interest of the people and nation.

With Malaysia being ignored internationally, its economy in disarray, and the social and political fabric in a dismal state, these events merely highlight the decline in the Civil Service has not reversed and on course to inevitably turn the country into a failed state.