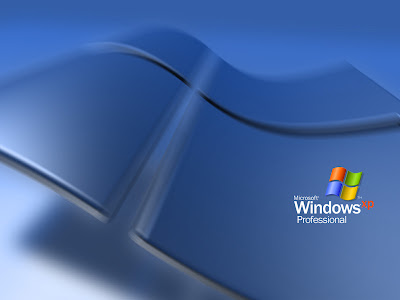 I am gazing at my PC pondering over another SMS alerting of possibile arrest of several Bloggers under ISA codenamed as Ops Padam sometime this week. This rumour had surfaced the week before and was first posted on Kuda Kepang blog on December 8th mentioning 5 bloggers, 10 opposition members and Hindraf organisers.

I am not ready to believe rumours these days, especially after receiving some malicous SMSes last week of some gathering at Kg Baru on December 16th, that thankfully, did not materialised. There was than talk of venue change to Puchong. I agree with the IGP to go after rumour mongers.

Thus far, only the Hindraf 5; namely R Kengadharan, P Uthayakumar, K Vasantha Kumar, V Ganabatirau and M Manoharan (their pictures below from left to right) have been held.

Unless he is able to secure political asylum abroad, another Hindraf orgamiser, Waytha Moorthy is expected to be held also under ISA upon his return from the United Kingdom. He managed to leave for United Kingdom after getting the first Sedition charge strike out on technicality. Waytha was the claimant for the ₤3 trillion (approx. RM13 trillion) class action against the British Government.

In the past practise of dealing with Communist, Al Maunah and other security threats, the initial procedure is for maximum of 60 days detention under Section 73 of the ISA for investigation and 'rehabilitation'. This detention comes under the authority of the IGP.

Subsequently, the detainess can continue to be held further till 2 years under Section 8(1) ISA upon approval by the Minister of Internal Security under advise from police. The police may upon consultation with the Attorney General decide to charge the ISA detainee under existing law. For more, read Sang Kelembai's latest posting on ISA.

The move to detain the Hindraf organisers is expected and in fact over due. There is no justifiable cause to support Hindraf, except support for their right to assembly by the more liberal quarters of society. However, the manner to detain under Section 8(1) without going through Section 73 process is not quite normal, even back in the Communist Insurgency era.

Why was the ISA applied when some of them are already going through the due course of the law? Why was it not applied before Waytha Moorthy left for the UK after being discharge from lock-up from the technical foul-up by the Prosecutor for the first Sedition charge?

Prior to the gathering, why did police not announce Hindraf will be rejected due to their unregistered status? Why was no warning or action taken against Hindraf that had made a 4,000 people gathering at Putrajaya in July this year and many other racially charged gatherings?

Procedural abnormality could only arouse suspicion. However, it is beyond common citizens, without access to security information, to investigate the true reasons. We are left with hope and good faith that the professionalism of the Royal Malaysian Police will not betray us. It appears Hindraf has got all their questionable demands documented thus, providing justifiable and indisputable basis that needs no 60 days investigation. 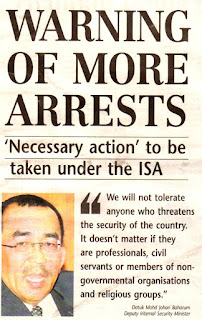 The gleeful remark made by Dato Johari Baharum (see the news report on the right as extracted from Cakap Tak Serupa Bikin blog) may have renewed the speculation on Bloggers.

Actually, Jo B is in no position to make such remark. As this Blogger understands it, only certain section of the Police force that deals with internal security have prior knowledge. The Minister and current IGP would have knowledge prior to arrest to endorse and sign.

The likelihood is Jo B's remark refers to the clear cut case of Waytha Moorthy. The quote from Dec 17th Bernama report below confirms:

He said all of them were involved in masterminding the unlawful gatherings with racial undertones.

If there are five Bloggers said to be arrested, it would likely be the Socio-Political Bloggers or SoPo Bloggers. They have been a threat to the power-at-be with their criticism, expose and commentary on the current leadership. That is not a security threat and a crime.

Other than Politician-Bloggers, SoPo Bloggers are mostly individuals expressing their views. As it is, there are laws from cyber law, to defamation laws, and various other laws to deal with wayward Bloggers. ISA could not be the basis, even how critical or influential the Blogger is, unless they are genuine threat to national security and have stretch themselves beyond the cyber world to participate in organising the mentioned racially undertoned illegal rally.

It has always been the believe of this Blogger that to deal with Bloggers is to gentlemenly engage them intellectually rather than being adversarial. The intellectual encounter to win the mind and heart than will be more effective than a battle with brute force. Such underhanded approach to deal with Bloggers will only make mytyr of them and proliferate more Bloggers. Off course, it is expected to be a onerous affair for the current leadership with their poor, battered and tattered record.

If the authorities had been more positive and patiance in their attitude, Bloggers particularly those with active commentaries are beneficial to their work. They provide useful feedback and source of information and new development.

This Blogger believe that some expose written by Bloggers (gentlemen or anonymous) are useful leads for further investigation and verification by the security personnel. Bloggers are even capable of giving expose into scope of area beyond their normal scope of monitoring. The SOPO Sentral Directory, that this Blogger created, but of late have been quite lagged in updating, serves the Blogging community, and browsers of Malaysian SoPo blogs. It wouldn't be a surprise it is used for security monitoring.

Internet is a useful avenue for information dissemination. Hindaf use their website, www.policewatch.com to disseminate information to their sympathsiers and supporters. It also reached others and enable independent mind to for an opinion.

However, free flow of information on the Internet has its own double edge sword. Transparency backfired on them as a clear majority of informed bloggers formed a negative opinion of Hindraf. In the cyberworld where the bulk of it's participants are of reasonable intellect, truth and reason will surface and find its true level.

Notwithstanding the already stated exception, Bloggers will only be apprehended under ISA if there is abuse for selfish personal political reasons. That is not likely to happen, at least for now. I will maintain good faith with our police to not allow allow such insiduous hands pervade. Nevertheless, I would not discount the possibility that the arm of the law will not reach anonymous Blogger like yours truly. If it does, I have some concurrence with these words of Zaharin Yassin below:

My fellow Bloggers, have faith in God's will. Savour this beautiful song by Dire Straits, Why Worry:

I give my trust to the police and it is beyond me now to worry. Que sera sera.

And Marina asked Who the hell is “Mohd Saiful Adil Mohd Daud anyway?”

As a journalist, I still wonder what the arrest of doyen A. Samad Ismail was all about. Five years inside. He has not written any book about it and I still hope he would. He was accused of being a threat to national security because and the Government then said he was trying to topple it and force onto the people of Malaysia some crap of a Communist ideology. Five years. For what might actually have been a threat to a politician's ambitions of becoming prime minister. He never did become PM, thank God.

I think I'll start a campaign to get the Government to apologize profusely and officially to Tan Sri A. Samad Ismail and his family for the ISA mistake and for those 5 years.

As for bloggers, no-lah A Voice. Are we anyhere near Samad Ismail then? Nope.

But then again, I know of ambitious politicians and PM wannabes out there. And for that, I won't sing along with you the Dire Strait's number Why Worry. Because I believe we need to ... worry.