Just News: TDM At Book Launch And On ISA and Judiciary 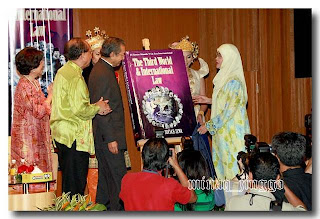 He launched a book by Tunku Dr Sofiah Jewa entitled "The Third World & International Law". She is a member of the Board of Trustee of The Kuala Lumpur Foundation to Crminalise War. She is quite an authority in International Law and the very few non-Western writer on this subject. This niece of Tunku Abdul Rahman is currently a partner in a boutique law firm in Kuala Lumpur.

Tunku Dr Sofiah's impressive resume begins with her calling to the Bar at Lincoln's Inn in 1970 and Malaysia the following year. Subsequently, she pursued her Master and Doctorate from the University of Miami in 1973 and 1976, respectively in Public International Law, Law of Sea and International Relations. She has done large volume books entitled 'Public International Law - A Malaysian Perspective', 'Malaysian Election Law', and many legal periodicals. 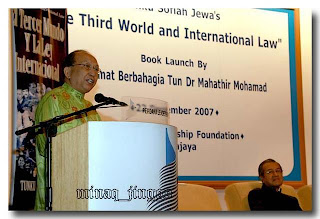 He said the third world position in international affair is a difficult one. Their interest are usually steamrolled and capitulated. Their voices are seldom muted out of need to survive. Colonisation was a historical experiance of non European land capitulated by European. A white man's claimed burden to bring civilisation to the new world is essentially their pursuit for wealth and power.

It is understood that KEKWA contributed to the writing of the book and the pomp and pageantry of the event. TDM's first official public presence attracted a hall-packed crowd. Noticably present are Tengku Razaleigh, members of the legal fraternity, politician-bloggers and socio-political bloggers, and press. 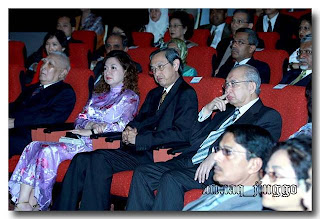 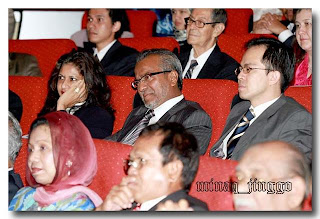 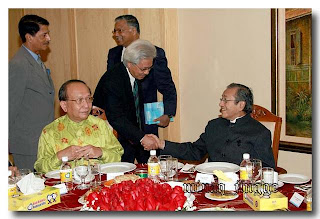 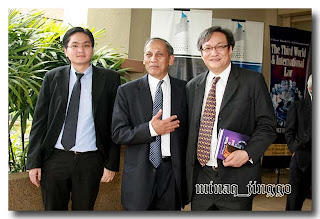 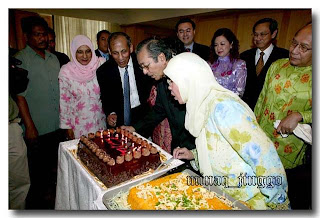 Soon after, there was a Press Conference, TDM's first after the recent open heart surgery. He was asked on the controversial VK Lingam tape (that implicated him), ISA crackdown on Hindraf and public demonstration. 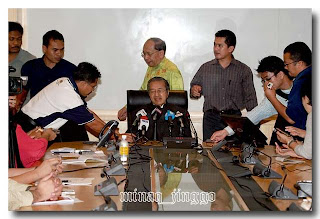 On the VK Lingam tape, he said, "I don't know whether Lingam said it or not. I did not see the tape. What I saw was on TV3, that's all. So I don't know about it."

He told of the visits and interview of three ACA officers yesterday for an hour. When asked if he will be asked to testify to the Royal Commission, he obligingly replied "If I am required to testify, I can't say no." 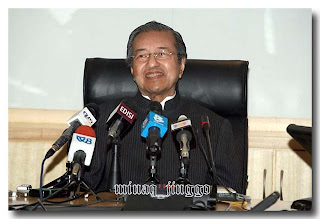 It left open to interpretations. Ronnie Liew of DAP, who was present, had his take. Big Dog had his. Whats your take?

On claims of ethnic cleansing here as alleged by Hindraf, Mahathir said, "I read a lot about ethnic cleansing in Bosnia. I have yet to see a lot of Indians being killed here. Malays killing Indians and all that….I think that’s a bit absurd.”

On public demnstrations, this is what he has to say, “They are entitled to raise (the issues), but there are other ways of raising it. If they have no other choice, of course, they may resort to demonstrations. But if they have a choice, they have their own leaders, they can meet (and) they can explain their problems, I think that would be the first choice.”

Hmmm ... did Pak Lah gave them Bersih and Hindraf avenue to speak to him personally?

Did that BigDog attend the launching and press conference?

Now, world is so interactive and communications's so efficient that bloggers can give productive and accurate reporting, even quote verbatim, without actually attending! :)

Good to see Tun Dr. Mahathir is back on the coverage of MSMs. Now, its 'back to business'. As Victorian era 'Super Sleuth' Sherlock Holmes would say, "The Game is afoot!"