Busted! The Myth of the Rising Per Capita Income 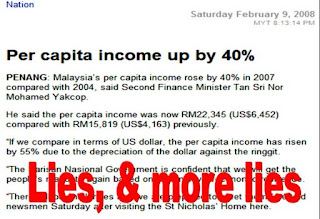 Newspaper cutting from Cakap Tak Serupa Bikin blog
Tan Sri Nor Mohamed Yakcop, Minister of Finance II claimed in Penang Saturday that the Per Capita Income rose by 40% throughout the premiership of Dato Seri Abdullah Ahmad Badawi. With the economy in such a pathetic state for the past few years, does that make sense?

Mind you, this is not the first strange economic numbers churned by the Treasury. Last year saw an avalanche of ridiculously big numbers – RM1 trillion total trade, unfathomable amount of projects and planned spending, and the world’s first ranged economic forecast for Budget 2008.

That’s last year and Cakap Tak Serupa Bikin blog made a good compilation of those Carl Sagan-ic numbers. Remember his trademark “…billions and billions of stars and planets ...”.

Since last year, economic observers may have been seeing stars from the dizzying height of economic spinning. It has gotten worse. The MoF claimed that Malaysia is the world’s 6th most competitive nation, but it turned out Malaysia’s rank worsened by 1 to 23. Don’t tell me someone wrongly advised the MoF. Anyone with any economic common sense will know it is ridiculous! 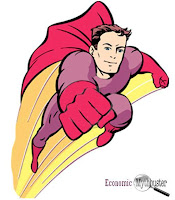 The misleading information and factual errors coming out from Minister of Finance I & II is putting the country in danger. General Election or not, I am not about to take this crap. This calls for the job of the Economic Myth Buster! 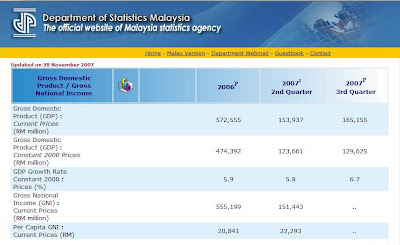 You don’t call the Economic Mythbuster for nothing, do you?

Per Capita Income (PCI) (sometimes called National Income or Personal Income) is derived by dividing the Gross Domestic Product (GDP) by the population. There are number reasons to believe Nor Yakcop’s claim as suspicious. 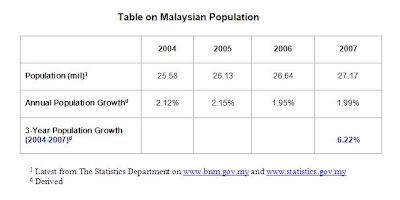 Yummy! Now for the spinning and misrepresentation part.

By calculating backward the population and the number mentioned in Nor Yakcop’s statement, one could derive the GDP figure as RM607.1 billion (2007) and RM404.7 (2004).

Is the GDP number correct?

Gross Domestic Product represents the total amount of goods and services transacted in the domestic economy. Since it is based on purchasers’ price, the GDP and PCI figure depends on what price is used. If it is based on actual or current prices, it would be as per the table below: 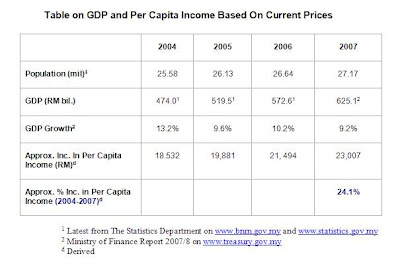 However, that does not reflect the effective or real GDP economic growth. The number may have grown because of rising prices (which is actually happening) and not actually due to more economic transaction. Economist would usually calculate based on the price level at a certain benchmark year.

Using the year 2000 as benchmark, our figures becomes as below: 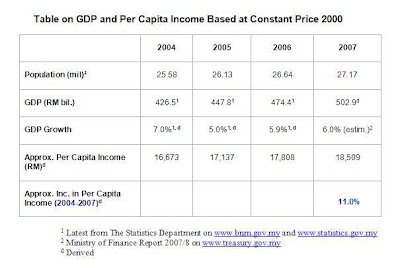 Wait a minute; I know what you are going to say when you see 3-year PCI is 11%. Step by step please.

All the figures are then compiled below: 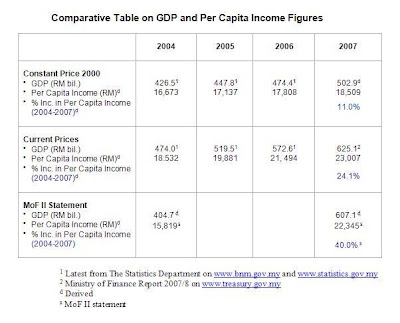 Wow, it reminds me of the ECM Libra and Avenue Merger!

Apart from the suspiciously fraudulent figure, there are other observations that can be derived: 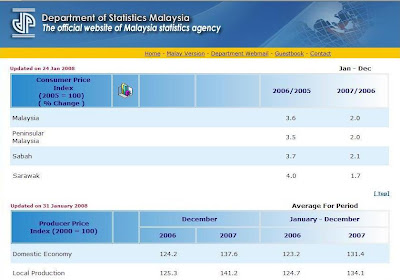 You are Busted, Nor Yakcop! 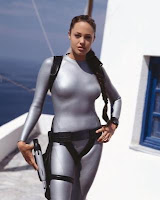 Over to partner Lara Croft. Deal with em, Lara.

Foreign investors and corporate business rely on economic stats and statements from officials for decision making and planning.

Spinning economic figure is a misrepresentation of the true economic situation of the country. Such unethical practise puts a bad light on the integrity of our Government and leaders.

It would be extremely difficult to convince and attract investment from investors that already distrust the credibility of the officials. That is only the case of spinning but the MoF I & II is now caught for outright lying!

Some apologist may say that MoF I is there merely to reduce political squabbling for the coveted position. Abdullah should be excused since he is not trained in economics. It is believed he failed in his statistics, flunked out of the University Malaya's Economics Faculty, and switch and graduate in Islamic studies.

If that excuse is accepted, it is incumbent on Nor Yakcop to provide the proper advice. He possesses an MBA from INSEAP and served BNM for many years. As one fluent in foreign exchange, he is expected to be familiar with economics – if not developmental economics or political economy or econometric, the least is basic macroeconomics. Instead of correcting the lies, he is now part and parcel of it.

There are many well trained personnel in EPU. Are they both utilising the expertise within the Ministry such as Wharton-trained economist Deputy MoF, Dato Dr Awang Adek Hussein and within the Civil Service? Or merely listening to the inexperienced legal and accounting-trained Tingkat 4 boys!

With or without the advice, MoF I & II must have the common sense to appreciate and understand the numbers. This is outright incompetence. The Prime Minister should not be holding this post if he is inadequate to carryout his responsibility and unfit to supervise his subordinates. He should appoint someone truly capable as Minister of Finance.

For Nor Yakcop, he should resign for making those outright lies! He has stretch his good luck far enough since the gigantum loss in hi smanagement of the nation’s foreign reserve.

the only think i understood was lara croft!!

providing Mr Another Brick in the Wall is correct (I think he is more credible source of econs these days, compare to those sweet and honey spinning gasing players!),

then i assume that Nor Yaacob is all bared naked for all to see.

now we should call him Yaa-Cock.

Can you check that whether he is the same man who were responsible for the biggest foreign currency loss made by Bank Negara while he was in Bank Negara AND also the chairman for a listed Company called Abbra or Appra. ( formerly Mun Long Berhad then later became PN4 and now OilCorp or something like that) that involved in multi-million loss that sunk that once profit making Company. And the directors were suing each other on CBT charges. If he is the same person then record speaks for itself Lah

Yes you are right.

Yes, a comprehensive analysis, I believe that the figure stated is ridiculously higher than the actual one. But,

You can't calculate like that by adding all the percentage up :S. The total increase in these 3 years is calculated by:

Tks for highlighting and calculating it.

I am quite aware but just being a melayu malas.

Thats why I said "simple total".

Wow, that's too many numbers, but thank you for sharing this. Love your blog. Linking yours to mine.

In the first place Abdullah should go through his speeches before he delivers it to the public.There have been many instances he gave wrong figures and information that made him looked stupid, unrealiable and incompetent.

I believe the people who prepared his speeches are either lazy or did it on purpose to make him look stupid and incompetent.

To claim that Malaysia is the 6th most competitive country is most embarrasing for him when this info could easily be checked and verified.The person who gave this figure should either be sacked or removed to other less important position.

To say all figures given by the government were cooked up to mislead the people may not be a fair conclusion.Most statistics are flawed in one way and another.Even renown world bodies like the IMF and Word Bank churned out completely different and nonsensical figures.

Below are some of them:

Take a look at the figures given on China by IMF, The World Bank and CIA Factbook.Which one would you accept as the correct one?

Economically, Malaysia has not done badly under Abdullah.The average economic growth from the time he took office to now averaged at 6% per annum.

The per capita(PPP) of Malaysia in 2006 are as shown below:

It is true that the cost of living has gone up the last 12 months and would continue to climb before it settles to a comfortable level.

I agree the inflation rate now would be higher than 12 months ago.It would be more than the 2-3%.

Due to weakening of the US$ and expected US recession, our export may decline for the period.However, we may benefit from cheaper imports including imported crude oil for domestic consumption.

The government may not need to increase the price of fuel oil if the world crude market price stays below US$100 a barrel and the ringgit continue to strenghten against the US$.

I will be surprised if they do.

if we were to table this to the village folks...they know nothing...even if we're present it to the current local teachers...they wont buy it

as a civil servant in the finance field... i am very ashamed of the PTD's in Treasury research outcome...simple calculation and yet deceiving people

maybe its time...all the finance things should be hand over to Accountant General Office

please give the people the right 'figure' of Lara Croft

Really, how can they cook these figures up and expect us to buy them? It's either they are really pathetic in their fathom of economics or they are bull shitting. They are all nuts without credibility lead by the biggest asshole of all time -Bodowi .

A thorough analysis indeed.
Even without the analysis, that 40% figure sure smelled of ikan pekasam with budu.

M.Nor Yakob and MoF must have assumed that all the rakyat all dumb and will cheer along with the figures they gave us.

Most probably Mof have Aladdin's magical lamp( to gosok jangan tak gosok)to come with that percentage.

Lies,lies and more lies.
And this came from the credible govt of ours.