Dato Seri, What is Civilisational about Islam Hadhari?

Ask at random any 10 Malaysians, what is Islam Hadhari? 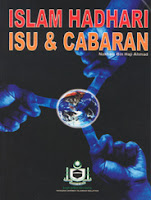 Do not be surprise if eight out of ten do not know what it is. Assuming on in ten could say civilisational islam, the likelihood is he or she could not explain it. We'll need a sharp knife to cut up the remaining one person to represent the proportion of people who really understand Islam Hadhari.

Should any could regurgitate the 10 Principles of Islam Hadhari, the subsequent question to be asked: Is that principle about building a nation or civilisation? In fact, it is seen as close to an Islamic rebranding of the 9 challenges of Vision 2020 nation building.

Civilisational Islam is a conceptual idea that needs a realistic and quantifiable preposition for governance. The word civilisation means differently to different people. Civilisation is derived from the word civil. Early English described civil as "of or related to citizenship" and naturally to mean statehood. It could also mean process towards civility, or polite virtue.

In a bigger sense, civilisation conveys a sense of dynamism. Social scientist view civilisation as a more complex political and economic structure than a state or country. This para from Wikipedia provide a simple cultural description of civilisation:

"Civilization can also describe the culture of a complex society, not just the society itself. Every society, civilization or not, has a specific set of ideas and customs, and a certain set of items and arts, that make it unique. Civilizations have even more intricate cultures, including literature, professional art, architecture, organized religion, and complex customs associated with the elite. Civilization is such in nature that it seeks to spread, to have more, to expand, and the means by which to do this."

Enough said, civilisation basically transcend above the state and society.

From the strategic perspective, vision and mission must be based on something specific, tangible and achievable. Only then could it conceive the specific objectives, planning process, formulate the strategy and implementation. The important ingredient to the whole process is leadership, structure and communication to effectively drive all resources and energy.

So, what is Islam Hadhari and it's specifics?

Till today, it is only speeches, seminars and forums, void of any programs. With the general election button pressed, Islam Hadhari will be one campaign tool used by Dato Seri Abdullah Ahmad Badawi's administration to convince the Malay Muslim and in general Malaysians voters of a glorious future ahead.

There was back in 2006 the Perkampungan Hadhari that is merely the Kelantan and Terengganu version of TV3 Jom Heboh!; a funfair that is more entertainment and media hype than building civilisation.

Within these few weeks, Terengganu had launched a Taman Tamaddun Islam (Hadhari) with the majestic crystal mosque at the Wan Man island near the mouth of the Terengganu river. It is situated not too distant from the Pulau Duyong, the venue for the rich and famous to congregate for the annual Monsoon Cup yatch race and luxury island resort. That is a property and tourism development, still form over substance of Islam Hadhari. 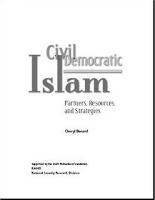 Universiti Kebangsaan Malaysia just had the Institut Islam Hadhari launched by Abdullah last Tuesday, February 12th. As Dato Mustapha Mohammed, Minister for Higher Education described in his speech, it is to undertake research on Islam Hadhari. So, after launching Islam Hadhari with all the fanfare in 2004, endless nationwide promotional campaign and many "majlis ilmu"s, only now a thorough research is to be done?

Abdullah spoke of the need for Muslims to be cautious of a threat within Islam - narrow mindedness of Muslims - at the World Multaqa of Al-Azhar Alumni. Al Azhar University is the intellectual centre of Sunni Muslims. Islam Hadhari received sort of an endorsement from the Rector, Sheikh At-Tantawi. This will certainly help for the general election hype.

Still, Dato Seri Prime Minister, what is the content and plans for Islam Hadhari?

How could the ummah revive it's Islamic civilisation and be united as one, when the Chairman of OIC himself took two weeks to return from his Australian holiday in 2006 to express the voice of OIC on the bombardment of Lebanon by Israel? There is no win the works a major genocide brewing in Gaza for more than two weeks whereby the Israelis are blocking the Palestinian from food, utilities and necessities. Again, why is the Chairman of OIC silent?

In yet another Islam Hadhari conference, the recently concluded The International Conference on Islam Hadhari Responses to Global Challenges talked of the need to improve the approach of Islam Hadhari, specifically the branding issue. Just like the inability of many to understand Islam Hadhari, that is a communication problem.

Lets not touch the humourous political pun, Islam Ada Had and Ada Hari. Neither should be touched the inter-faith issues that is the cause for concern amongst non Muslims and could be a source of threat to the peace and stability of the country. The past administration only embarked on instilling Islamic value or specifically making hard work and industry as Islamic habit of the civil service. Since the launch of Islam Hadhari, the government is accused of going on an Islamisation drive.

Dato' Seri Prime Minister, we've got a general election campaign to think about. Seriously, what is civilisational about Islam Hadhari? Don't you thinking your Islam Hadhari is too far forward to be achievable?
at 2/16/2008 06:45:00 PM

After 50 years, if not for Datuk Seri Abdullah, we would not have the first Tsunami and victory for democracy in Malaysia.

Let's just look at the scenario:

1. Datuk Seri Abdullah released DSAI when he came to power.
He did not need to do this.
Dr M would probably have driven DSAI to commit Harakiri in prison!

2. Datuk Seri Abdullah did not stop the bloggers from giving altenartive news.
He could have arrested these bloggers under ISA.
Dr M would definitely have done this at least prior to the election.

3. Datuk Seri Abdullah allowed the Bersih and Hindraf to organise their rallies. Under Dr M's rule,
the organisers would have been arrested even for thinking about organising the rallies.

Judge a person from the outcomes of their leadership, not from what their detractors say.