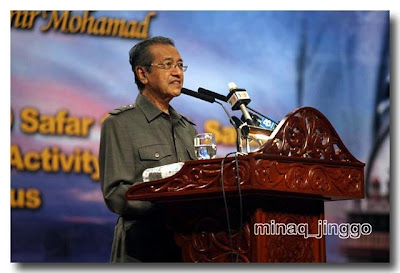 Picture courtesy of Jinggo. For more picture, look here.
Dr Mahathir, delivered the keynote speech for the Ummatic Week 2008 Seminar at the International Islamic University (UIA) yesterday, February 16th, 2008. In his speech entitled “Global Peace: Crisis in the Muslim World”, he called upon Muslim to acquire so-called “secular” knowledge in sciences and technology.

Earlier, Dr Mahathir was given a rousing welcome by the audience. In his welcoming speech, University President, Tan Sri Sanusi Junid said that UIA was established for the ummah to acquire knowledge in not only theology but other fields in science, technology, humanities and arts. Today UIA students are all over the Muslim world and are making their presence in their own countries. He told of a former student that will soon be a President of a Muslim country.

Sanusi reminded the students that Malaysia was a proud nation under Dr Mahathir. Chinese and Indians who went abroad stopped referring themselves as Chinese and Indian but as Malaysian. Malaysians were brave to venture to climb Mount Everest and sail the world alone. UIA will be that international link that will be ever welcome and willing to hear of the ideas and thought of Dr Mahathir, the Founder of the University.

Dr Mahathir spoke extensively of the need for Muslims to acquire knowledge, and research and develop to generate knowledge. In his speech, he acknowledge that the Quran did not specifically said to acquire knowledge on area other than theology but the Quran specifically mention the need to defend ourselves. Since Muslims lack the knowledge, Muslim nation had to rely on the “enemy” for weapon and defend them and not develop the ability and capacity to defend them.

Holistically, defending a nation does not infer only on millitary cability but covers other areas of economy, trade, agriculture, education, society, international relation, science and technology, industries, communication and infrastructure, and etc. This relates to the Dr Mahathir's drive to develop Malysia during his premiership.

Dr Mahathir told the highly enthusiastic and appreciative students that Muslims must stop the attitude to blame others for their trouble today but look towards themselves for the faults. The trend reversal towards knowledge by Muslim in the 1300 and 1400s and the renaissance in Europe in the 1500s resulted in the weakening of Muslim and the rise of Europe.

Muslims need to remove sectarian differences and the fanatical inclination to teachers. Dr Mahathir emphasised the need to return to the fundamental teaching of Islam to promote unity and brotherhood within the ummah. 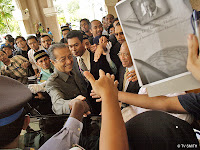 Dr Mahathir reiterated his once controversial and widely criticised stand on suicide bombing. In his view, the sacrifice is not worthy for it has created more problems for Muslims. He felt suicide bombing does not confirm one to be accorded syahid (matyr) and the reward of heaven. (The crowd picture by TV Smith)

Muslim has a tendency to be emotional and reactive without thinking of the repercussion. Thus, Dr Mahathir impressed on the need for Muslims to think and plan a long term strategy. He ended his speech with a Malay proverb, “Bila sesat jalan, balik pangkal jalan”, meaning when lost, return to the point of departure.
at 2/17/2008 10:05:00 AM

Who is the former student who is expected to be his country's President soon? Or just the country for that matter! Thanks

Note the keyword ... "will soon be". Try google it. I do not know neither. Definately it is not AAB, he is PM and not President.

DrM has never lost it. call him a dictator or some other shit but by the looks of things happening around the country, nobody can lead us better. he's still capable and everyone knows it.