Kayveas and Syed Arabi: A Time For Honest Reevaluation VI 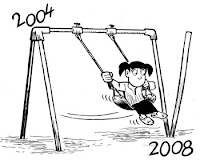 Two Bernama report today related to analysis of the election got my attention. The first Bernama report is Kayveas's brutally frank opinion.The second is an interview with Syed Arabi. 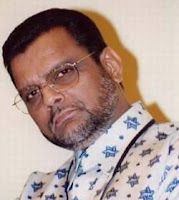 He said they had to study the reasons behind the downfall of four states which were previously held by BN and its failure to wrest Kelantan from the opposition.

Normally, the party leadership is responsible for its victory as well as its defeat, he told reporters at the wedding of a daughter of Kelantan PPP chairman Datuk Nik Sapeia Nik Yusoff here Saturday.

Will there be a disciplinary enquiry or the extreme of PPP expulsion from Barisan Nasional for Kayveas's remark?

If anyone can recall, Syed Arabi released a survey study prior to the recent election on the profile of voters and relevant issues. He said the issues is local and of bread and butter nature.

The news report on his study on voters swing is republished below:

What Prompted Voters To Swing This Time 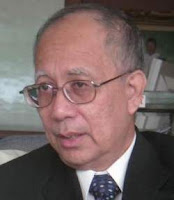 KUALA LUMPUR, March 22 -- The 12th General Election is over, the federal and state governments have been sworn in except for Terengganu, but what still lingers in almost everyone's mind is what prompted the voters to deny the two-third majority to the Barisan Nasional (BN), which had ruled the nation for more than 50 years.

Datuk Professor Syed Arabi Idid, Rector at the International Islamic University Malaysia and its Head of the Electoral Studies Unit, admits that the outcome, which came as a surprise to him as well, was probably part of a new voting trend.

"They did not vote for the Opposition, they just voted against the BN," he told Bernama in an interview.

Dr Syed Arabi, who has made an extensive study of the voting patterns in the country, shared with Bernama his views on what was probably on the minds of the voters and what one could expect in the new political landscape.

Q: Why was there a massive swing towards the Opposition this time

A: The voters individually wanted to show their displeasure with the BN but they did not realise that collectively their action inadvertently denied BN of its two-third majority. Anyway, despite the (current) status quo, everyone is cool and calm, waiting to see what is going to happen. This is a stark contrast to the post-election period in 1969 when the Alliance (the predecessor to the BN) was in a somewhat similar predicament.

Q: What could have been the reasons for their displeasure

A: A lot has been said on this, and the rising cost of living has been singled out as the most compelling reason. But there must be more than this. I see a combination of factors. The Chinese were unhappy with the state of the economy as they felt it could have been better. The Indians lamented that they have been marginalised in every sphere. So, the government decided to make some concessions for the non-Malays, and this incurred the wrath of the Malays. Therefore, the three different races went all-out against the BN for different reasons, and this explains the outcome. If the cost of living was the sole factor, than we would have seen the same impact in Sabah and Sarawak. Another factor, I believe, that incensed the Malay voters is the rally of the Hindu Rights Action Force (Hindraf) last November.

Q: But do you think current issues alone could have tipped the balance

A: My observation is that since the 1995 general election, issues have profoundly influenced the election outcome. The 1999 general election saw the Anwar Ibrahim saga and the financial crisis swaying the votes to the Opposition and in 2004 the votes swung back to BN after Datuk Seri Abdullah Ahmad Badawi with his "Mr Clean" image took over the helm. Another thing that could have contributed to some extent is dissent within the BN component parties.

Q: Is the outcome a sign of political maturity of our voters; that they are willing to vote transcending racial lines

A: Not necessarily so. But one sure thing is that the voters have changed. The general assumption that "my vote is for the BN" no longer holds true. And more are now aware that their vote counts. The attachment to BN has declined with the rise of the middle class. This is especially evident among the Malays where their bond with Umno is no longer (that) strong unlike during their parents' time. But that does not mean that they won't vote for the BN. The vote swing favouring the BN in 2004 stands testimony to this. Voters are also increasingly becoming apolitical and are voting based on issues. In a nutshell, the voters are more discerning and demanding nowadays.

Q: The Malays have taken a bold step to vote for the Opposition, knowing fully well that many of their privileges and rights could be at stake. What does this go to show

A: Yes, they voted for the Opposition but that does not mean they have voted against their privileges and rights. Both are very much at the heart of the Malays as we have seen from their reaction in Penang when the new Chief Minister made some remarks over the New Economic Policy. I'm certain that any attempt to abolish or curtail them will see Malays opposing strongly. But now, when a threat like this crops up, the Malays (may) regret why they had rocked the boat in the first place.

Q: Do you see the Anwar and Abdullah personalities having had any bearing on the outcome of the election

A: You made it look too simple. Anwar has his own charisma but Abdullah is the leader of a bigger setup with its influence spreading all over the nation. Naturally, Abdullah has a bigger burden to shoulder. Furthermore, Abdullah and the government were seen in (relatively) poor light over many problems like the toll concessions, which were in fact a problem inherited from the previous leadership. I don't believe their personalities made the difference but I see the BN failing to counter many of the accusations in the language that the people could understand.

Q: History has shown that the Congress party in India that fought for independence suffered a decline in support over the years. Is the same fate imminent for the BN

A: No, I don't think so. Congress is a family dynasty unlike the BN, which is a dynamic party with evolving leaders and a great sense of accommodation. Umno, being the dominant party, has seen a change in leadership style and substance when leaders changed. The same happened with the component parties. Nevertheless, the core substance and accepted principles remain the same and this promises continuity for the nation.

Q: As the people have chosen the loose coalition of PKR-DAP-PAS to rule Selangor, Perak and Penang, do you see this coalition as a viable alternative for the BN

A: It is difficult for me to see them as viable at this point of time as all three are at the crossroads. PAS, with its Islamic ideology, cannot see eye-to-eye with DAP's secular beliefs while PKR is holding fort by pleasing both. Neither is PKR a dominant member like Umno to lead all of them on a common platform. As there is no viable alternative platform as yet, to give up the BN and say we are going for an alternative is dangerous.

Q: Do you think the loose coalition will be able to administer the states without assistance from the federal government

A: History has proven that Penang headed by Tun Dr Lim Chong Eu under the Opposition platform made no headway until it came into the BN fold. So did Terengganu under PAS. Therefore, the cooperation of the federal government is vital for their survival. Only Kelantan remains the exception. The fate of poor states like Kedah (now ruled by PAS), which is highly dependent on federal aid, now hangs in the balance. And states like Perak could end up in political limbo because the Menteri Besar comes from a party with the least number of seats in the coalition. However, what will be of interest is Selangor. Can the Menteri Besar, Tan Sri Khalid Ibrahim, with his good credentials, prove that the coalition can rule successfully one of the richest states in the country If they succeed, then we can anticipate a permanent change in the nations political landscape. Only time will tell.

Q: As the federal government no longer enjoys a two-third majority (in the Dewan Rakyat), what can happen now

A: The absence of a two-third majority can affect everybody. This status quo is certainly not comforting, especially when we are not used to having had such a scenario. A nation of a multiracial character needs a strong government. A simple majority should suffice to run the country as long as there is no major political upheaval.

Q: What does the future hold for the BN

A: It is a coincidence that this significant change occurred during the 50th anniversary of nationhood, and there are many lessons to be learnt. With the (announcement of the) reform cabinet, the first phase of the healing process has started. The BN has to work even harder compared to how the Opposition worked to woo the voters. There is no place for complacency and the BN should no longer rely too much on the votes of party members. I see no problem in the BN winning back lost ground if it stays focused, taking into consideration that voters may not go along party lines. The next election could be held sooner, all depending on how fast the healing process takes. -- BERNAMA

Hind sight experts, past extrapolators, and great on analysis typically short on recomendation.

Since the election results, Kayveas has been blaming everyone except himself. He has laid the blame squarely on BN and its leaders. It's time he admits the fact that he is hated by lots of people. Talk to ordinary people in the streets, especially in Taiping. They loathe him, and call him a liar and a cheat. He should learn to take responsibility for his own failures: learn from Koh Tsu Koon. Unfortunately, Kayveas does not have the same wisdom, humility and intelligence to do so.

Pity. Like Keng Yaik, Mr Kayveas could have said it before the event. Nasi sudah menjadi bubur.

Why is it so difficult to come to terms with the REAL fact: Malaysians are fed up with the extent of corruption (both real and perceived) in the country and hold the ruling government responsible. This explains, in a nutshell, the outcome of the 12th GE. Everything else is secondary.

Kayveas is not any better but we need more voices to crank up the decibel, in hoping to wake Pak Dol up from his deep slumber.

Simply Put: Is not the "Opposition" multi racial,multi cultural & multi ethinic? Is not the "Opposition" voted by the People for the People of the People? Why are all of us trying to retro into the same divide & rule the British used to exploit us, which was revived by the BN administration over the last 25 years?
Prof: We have come a long way,baby!
Kaveyas:Please rebuild PPP & rethink your Party's fundamentals!

The Rakyaat have spoken & instead of knitpicking{there is a very ruder word in Tamil!}, please assist the "new dawm of governance" to move on & heal the schism created over the last 25years!