The Nor Yakcop-Khazanah debacle in Pantai: Part 1

Oversight and over exuberance is nothing new to Tan Sri Nor Mohamed Yakcop, but luck has always been on his side. That luck must run out fast before the nation have to incur more costly mistake from his misadventures.

Words are Najib is reshuffling cabinet soon. Hopefully this time former sprinter Mumtaz Jaafar will stop 'running' as Nor Yakcop's lobbyist. No more Mumtaz, please. This is for the nation's sake.

Mun Loong was supposed to be their public listed vehicle to consolidate businesses they acquired. They were acquiring businesses in no orderly and strategic fashion - from plywood factory, Canadian satellite company to prawn farming. They had no inherent management expertise. Without experiance but thinking big, management was typically command and control style with corporate headoffice mindset. In a matter of time, they failed. 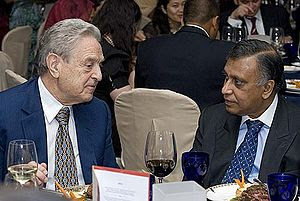 Dr Mahathir understood that it takes a thief to catch a thief. Thats how he described foreign exchange traders. Nor Yakcop may have failed in his market dabbling, but he knew sufficiently how the market operates and the big boys in the game. Yes, as described in Edwin Lefevre's investment classic, Reminiscences of a Stock Operator, the foreign exchange market too was a game where knowing the rule book is insufficient.

He was appointed as Adviser of Bank Negara. From there, he was elevated to Ministerial status and appointed to Senatorial position. Under Tun Abdullah administration, he became Minister of Finance II. Originally the plan was to maintain him in cabinet with the task to restructure and consolidate the Government companies into Khazanah, but he managed to stay longer after Abdullah's departure.

The shortcut to disaster

Part of his task was to create a new pool of “young” CEOs. The keyword was young. Experience, expertise and capability came second to young. Company succession plans were thrown out the window. The cardinal rule of thumb in choosing CEOs - operational experience, planning capability and understanding finance - were made irrelevant.

The way was to get kids from branded ‘schools’ (meaning Universities) and those with impressive resumes, preferably consulting experience.

The first few identified for that program were Rosman at Malaysia Airport, and Abd. Rahman and Shahril at MRCB. Then came names like Azman Mokhtar for Khazanah, Wahid Omar for Telekom (now Maybank), Cik Khalib for TNB, etc.

Some did a good job but most of these CEOs suffer due to lop-sided experience. Not to mention, ego and arrogance of youth and lack of finess. They are mostly accountants and naturally are figuratively minded book keepers. Too few anong them went through the ranks to acquire sufficient operational experience in planning, managing and problem solving in the day-to-day running of organisation.

These theoretical and rhetorical minds were bad in decision making, weak in problem solving and negotiating, and manage by ‘outsourcing’ - assigning to their top executives or consulting firms.

Before even introducing the background of the Pantai debacle, the reason the several part series on Nor Yakcop-Khazanah debacle at Pantai begin with a lecture on basic strategy implementation is to show the root of the problem lies within the maxim I was seldom scolded for in the early part of my career. Never be the blind leading the blind. 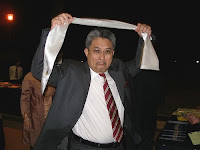 The Parkway acquisition of Pantai was representative of such endemic problem. Nor Yakcop had went beyond his scope of expertise. A non starter in the corporate world is leading the government's corporate reorgaanisation plan. He had to depend on boys like of Tan Sri Azman Mokhtar to be his walking dog in the corporate jungle.

Azman Mokhtar was too inexperiance to lead Khazanah. He was picked there for Binafikir's Wide Asset Unbundling for MAS which was a mere hyped. It was basically an undergraduate corporate finance 'cookbook recipe' called sell and lease back. The Pantai disaster can be partly blamed to Pak Lah's slumbered intervention. Basically, Azman failed to find the creative, and rightly prioritised solution to such delicate problems like Pantai. It was a clear case of the blind leading the blind.

This lies the skewed Malaysian ways of always putting the wrong people at the wrong positions. If today's overzealousness is with accountants typified as company record keeper, at one time it was with lawyers. Lawyers’ role in any organisation are limited to legal matter and naturally supportive in nature, but are given such prominent roles. Such is not practise abroad but it is only in Malaysia such things happen.

The Pantai debacle was also a serious oversight by the Minister in charge. There was a prevalent lackadaisical attitude by the Khazanah CEO for not giving and being sufficiently shrewd to give national interest foremost priority. That gave rise till today the suspicion they were compromised.

In other countries, the Minister and CEO would have resigned for such serious oversight but here we allowed them to continue to make more mistakes. It seems the KPI they instituted in their organisation doesn’t apply to them.

In the case of Azman Mokhtar, words are his golden parachute is too costly for Government to drop him. Government will drop other CEOs without proper compensation but not Azman. Come renewal time, he will find ways to make himself indispensable to renew his contracts.

The serious mistakes of both Nor Yakcop and Azman Mokhtar will be elaborated further in the ensuing series.

your observations are pretty accurate. Just to share some experience from my multinational days, CEOs come from within the system. There is no way that a person can attain the highest position in the organisation without having earned the respect of his peers, knowledge and acumen in the industry, vision and intrapreneurship to lead and position the organisation to a higher and new level.

In other words, value creation is key to the survival of the organisation, therefore the right person with all the RIGHT credentials is selected.

What is most important in any succesion planning is that there are normally around say 5-10 potential aspirants for the top job. The real acid test is that when you reach the top the other aspirants acknowledge that you are truly the right chosen one and that they will rally and support you in taking the organisation to greater heights.

Here in Malaysia such approach is not done and it's not even close in the GLCs, that is why we will have difficulty in gaining the respect of peers in the industry especially globally. This model we have today is why we keep going down on the competitive index because we ignore fundamental rules of engagement in any industry.

Just to give an example, an engineer would have difficulty accepting instruction of an accountant in his industry unless that accountant has had, say 10 years in the industry before becoming a 'boss' in that industry. Respect has to be earned through years of experience and wisdom of age and not forced upon the organisation. This practice of 'forced respect' unfortunately is what is happening in our GLCs today.

I have been waiting for this BIG 1.

Shall I take this as a sign that Black Midas and Amokh will be out PROMPTO!!

Well said Bro, I think Azman Mokhtar has reached his level of incompetence a long time ago basically when his Binafikir managed to convince the Government of the day of the "briliantness" of their so called turnaround/rescue plan of MAS, why the powers that be is still keeping him as the Khazanah Holdings Boss, only God knows.

The MAS WAU (wide asset unbundling) introduced by Azman Mokhtar when he was with Binafikir was actually proposal by Intrakota MCGay Gay boys to solve KL public transport woes. This guys do not have nice words anymore for their superjunior copycat Amokh.

The WAU plan may work in Intrakota coz the proposer have actual operational experiance. To use in MAS is another thing. See what is MAS today?

CEOS must be leader that earn the respect of their peers and not forced upon by politicians.

They failed all. Not even any sign of success.

Have any info regarding Syarikat Perumahan Negara Berhad (SPNB)?
During Nor Yakop tenure as MKII, the previous MD (Dato' Zaihan)was "forced" to resign and new MD (Dato' Amin) was appointed which have no idea how to manage the GOC. Money was spent like nobody business. Now SPNB in big trouble with no money in the bag. The current MD (KR as he fondly known) is also young (37yrs old) with no experience of malaysian property culture (he came straight from UK because of connection with the current MKII). SPNB will became another liability to gov.

What about NAZA's 15 billion for 628 million deal? Dont take public for fools

Azman went to Khazanah, and his other Binafucker's partner, Danny went to Aseambanker. Despite WAU being a WTF, both were "given" bigger responsibilities. But the best part is why Maybank needed to acquire BinaFucker just to bring in Danny and his friends? Only in Malaysia! The move was planned even much earlier in 2004/5, but TS Amirsham rejected the idea. Thanks to AWO (Wahid), now Azman finally managed to plant his boys into PNB's main jewel, ie Maybank. The sad part is the existing Maybanker were treated as if they know nothing. Many have left Maybank, the staff turnover is rising (as opposed to the share price), and yet AWO remains Danny's main umbrella. At the rate Danny is going, it seems that he and his friends believed that they can do the job without the assistance of others (the exisiting Maybanker). Let's just hope that Maybank is not going to add another WAU flop in the making into Malaysia history.

You seem to be CRITICAL of NMY, but say NOTHING about NAZA-Matrade deal. WHY?

How many subject do you aspect one posting to deal with? One subject at a time, isn't it?

Am I responsible to write about every subject that you want to know? Ridiculous isn't it?

Please cut out those cheap remarks.

Hey voice why is it that only malay names are mentioned as ceo don't tell me that there is not even a single non malay in Malaysia that is capable for the job.After all the screwup's don't you think things should change.

p/s am not being racist but Malaysian.