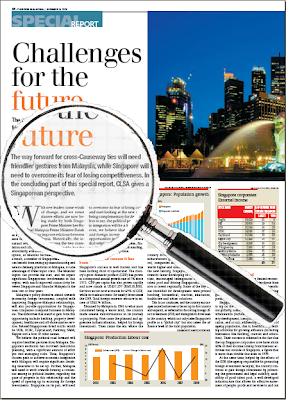 This is done within the jurisdiction of the PM as pointed out by Tengku Razaleigh. Ku Li also said that Directors who protest should have rightly resigned.

This blogger have expressed his suspicion and doubt of Omar Ong on many occasions and even in the not too distance past. Of late, there are those who feel it was wrong and unfounded. Omar Ong is not what many had perceived him to be.

Since the PM has decided, some level of trust on the PM's decision is due. It is expected that this blogger give the PM the benefit of doubt. However, on Omar Ong's part, he must make effort (not just deny and talk) to convince that he is different from those Tingkat 4 rascals.

As Petronas Director, Omar Ong is in the position to address a grave concern on the sectoral plan for the oil and gas industry in Iskandar, Malaysia. This presents an opportunity to change the perception towards him.

Blogger bigdogdotcom had written an impressive analysis of Iskandar and the annexation threat on Johor by Singapore. His analysis was based on the latest The Edge’s Special Report featuring the third series of CLSA report on the Singaporean perspective on the way forward for cross-causeway relationship. Comments in his blog posting highlighted potentially hostile millitary buildup by Singapore. Read his analysis here. 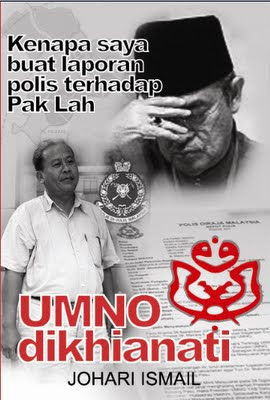 His concern have been the concern of Johoreans since the launch of what was then called South Johor Economic Region (SJER). The annexation was anticipated in a Malay political book put together by former journalist Johari Ismail and published last year.

In the CLSA report, the Singaporean attitude for our oil & gas industry in Iskandar is only aimed at getting a piece of the pie from Petronas and not to bring in mutually beneficial investment. Sembcorp Marine was mentioned as skirting with the idea to invest but has not given any commitment.

Another aspect they are looking is the consolidation of companies which will be explained later in this posting.

The first para of the report on the oil and gas opportunity as they see is below: 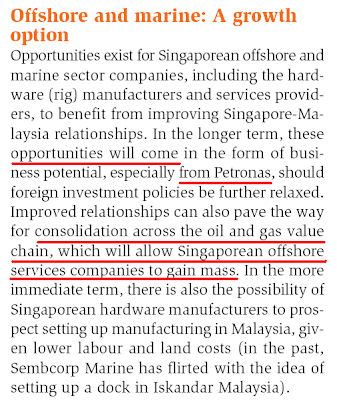 The Singaporean are eyeing Petronas contracts for future plans to do deepwater exploration. They estimate the annual Petronas exploration spending at US$1 billion. This exclude the opportunity from multinational companies which currently are required to be given out to local or locally associated companies. Read below: 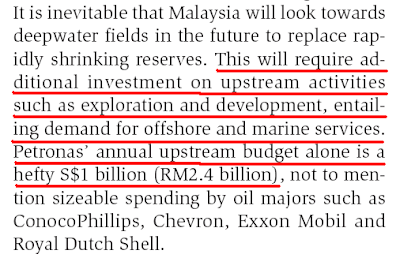 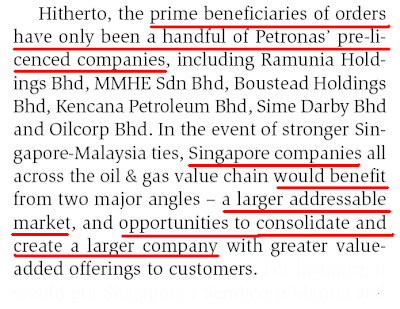 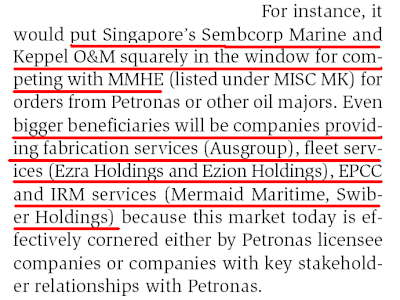 The "larger" small local companies are targetted too. Read below: 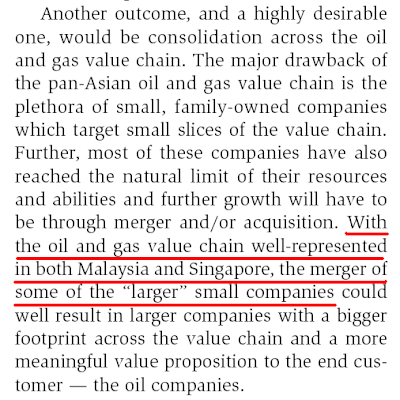 This blogger had sufficient years of experiance in the capital and financial market to say that news and special reports emanating from such financial magazines do not appear out of the sky. Usually it is arranged by parties promoting such ideas or 'warming' up the investing community to anticipate a certain plan to be executed.

It is more obvious with The Edge, which have office in Singapore and publish their Singapore version of The Edge. It could be a marketing effort by parties attempting the Singaporeans to invest. The party/ies would definately have past close relationship with The Edge and can be traced.

From this analysis, Omar Ong must ensure the exuberance to bring in Singaporean investment must not overlook the fact that it is Singapore that stands to benefit more than Malaysia. Singapore will get the meat, Malaysia, who owns the oil, will be nourishing bone soup.

Singapore is not bringing in much added value to the Iskandar and Malaysian oil and gas industry, other than competing with local companies for contracts, acquiring local suppliers, contractors, transport companies, and service providers and eventually listing on their stock exchange.

This is unlike the plan put forward by Tengku Razaleigh in a speech he presented in Parliament on September 13, 2006. According to his proposal, Malaysia should be able to harness the capital market of the world in its pursuit to be the leader in all areas in the oil and gas industry in ASEAN. Read here.

If these plan camouflaged as a CLSA Special Report on The Edge is put forward, Malaysia is not going to be that envisioned leader but will be playing second fiddle or even become dependent on Singapore.

For recollection, the Iskandar idea was crystallised and championed by Dato' Dr Vincent Tan and Dato Zaki Zahid of the infamous ‘Tingkat 4’. They were noted for being too open and embraced Singapore in their economic policies to the extent of giving away our advantages.

It shows how shallow, lacking in ambition, and regressive those deemed by some as our so-called bright young men.

Omar Ong can prove he is not in co-hort with the Tingkat 4 destroyer of the nation by redressing this aftermath from their path. As a Petronas Board of Direrctor, he can play the role to stop the Malaysian oil and gas industry from giving away our advantages to Singapore's sel serving interest described in the CLSA Report.

If he is unable to dismantle and at worst, was found to be part of this plan, the suspicion and opinion of himself will remain. And Ethos Consulting and Capital used to be given special coverage by The Edge.

Good analysis, bro.
Not to worry abt OO, mark my word, Najib days are numbered till end of this year.

I am promoting Johorean TSM to be the next PM and we shall then clean up IRDA including OO.

Look like KJ and Former MOF II boys are making a BIG COMEBACK.Omar Ong,director of Petronas.(Come FEB 2010 he will be Chairman and CEO when Hassan contract expire.) Shahril Riza,deputy CEO EPF(Come SEP 2010 he will be CEO when Azlan Zainol retire.) Zaki Zahid CEO of MRCB and Kamal Khalid in Media Prima.At the end of the day,Kaki Rasuah Politik Wang KJ will be PM and the Black Spider former MOF II will be Finance Minister.

Many folks like us are dependent on your radar screen(s) to detect potential real threats(not necessarily military) to Malaysia's security and sovereignty.
While we acknowledge the loud and sharp images of the incoming hostiles,there is the old cat and mice lesson of "but who will put the bell on the cat ?".
Best of all luck to us,btw,today s' news that the coastal seafront city of Shanghai is facing the early effects of global warming and King Canute failed to stoppe the sea from going inland to Shanghai city.
Therefore the Singaporeans are latching on to Johor so that the in 30 years time Johor will be part of Singapore or Singapore will do a reverse takeover of Malaysia via Johore.
Mah Ngah Tong.

I hope Muhyiddin will be the PM soon and wash the shit created and left by the 2 PMs.

The way, Malaysia is borrowing from China now, I won't be surprised if one day China ends up owning large quantities of Malaysia. No wonder SSS is not emphasised by the Top.

Why oh why are M'sians so forgiving?

Enough is enough. the malays are always at the loosing end pasal terlalu sangat nak jaga hati musibat2 yg tak mengenang budi dan pengorbanan org2 melayu. There are thousands capable bumiputras available in the market compared to this so called OO. NAJIB should be more careful when side stepping land mines.,instead of his publicity desires.Always ensure that at any point of time the key post of GOVT entities should be headed purely by the indegenous which goes without saying.