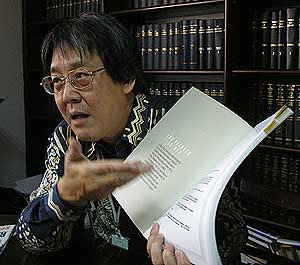 In his appeal to Chang, conveyed by his officer, Dr Mahathir said Chang needed to end his fast as they had a lot of struggle ahead of them.

They needed him to continue with his struggle for justice for the Palestinians and Iraqis.

Dr Mahathir who is currently abroad, also said to his former political secretary that he would make every effort to have the unjust law repealed or amended and he needed Chang to advise him on it.

Chang who went on hunger strike since April 1, agreed to end the 9-day protest after Dr Mahathir's appeal was relayed to him.

He had refused to take any solid food since his incarceration which took effect on Apr 1.

His health took a turn for the worst forcing the Kajang Prisons authorities to admit him to the Serdang Hospital on Monday where he was put on drips. Chang had then still refused to take any solids.

Friends who were concerned over his health initiated to pay the RM20,000 fine on Monday which was accepted by the court but an application for a discharge order was rejected by High Court Judge Noor Azian Shaari on grounds that such application cannot be made by a third party.

Justice Noor Azian had prior to that sentenced Chang who refused to pay the RM20,000 fine, to a one-month prison for contempt.

Chang was discharged from hospital on Wednesday and returned to the Kajang Prisons and persisted with his hunger strike.

His condition worsened and family members and friends, fearing the worst, kept appealing to him to end his strike.

No Comments from viewers as he is seen as fighting without a cause..