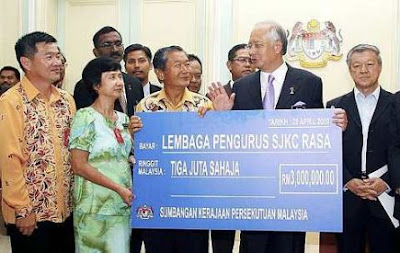 When Perkasa President Dato Ibrahim Ali expressed his dismay at the Chinese voters who accepted contributions without any hint of guilt for not delivering the votes for Barisan Nasional, he may be expressing the frustation of many Malays.

There is now a willingness on the part of Indians to return support to Barisan Nasional. It looks like 1Malaysia is missing one important link and that is the Chinese as far as Semenanjung is concern.

Why is the Chinese reluctant to give the ruling party the votes? Is the Chinese voting on "racial" lines? By this, it means Chinese will vote strictly on their own racial interest instead of national unity. Will that be the ideal situation to move the country forward?

Much concession have been given by Government to Chinese demand that certain quarters of Malays and that quarter is represented by Perkasa felt UMNO have betrayed it's own constituency.

Since the Government have grown more relaxed and abandon the PPSMI program which means Science and Mathematics is taught in Chinese in Chinese schools, instaed of being grateful, Dong Jiao Zhong is demanding for lesser class time for Malay language.

This is despite the more inferior Malay curriculum taught at Chinese schools and by right, teaching of the National language should be standardise for all schools.

While the Chinese are making demands after demands, the Ugama schools, including the one used as polling station at Hulu Selangor are having a tough time getting just new desks and chairs.

Very soon this dissatisfaction will seep into the other communities.

DAP is claiming they represent Malaysian but they did not make any effort for protest vigil for adik Amirulrasyid and the two killed in accidents with ADUN for Sekinchan and Tian Chua.

As a partner in Pakatan Rakyat, DAP do not compromise but are insistant on having their and Chinese ways to the point of injustice to the other community have creep in. DAP Penang ignored their PKR and PAS partners in Government that resulted in PKR MPs and ADUNs leaving PKR in enblocs.

How much further can the more economically endowed Chinese continue to play politics to vote on racial ground i.e. abandoning the moderate and inclusive MCA in favour of the more chauvanistic DAP? Or are the Chinese demanding that MCA take the same radical route as DAP?

If this trend of politics continue to persist, the Malays will become more suspicious of Chinese political parties and resort to vote on racial line.

MCA whose leaders rely on subsidy seats in comfortable UMNO areas like Johor will find themselves unrepresented. DAP will become more radical in the Lim Kit Siang mould that could reignite a racial timebomb.

Where will the country be heading to if Chinese votes are with the opposition and Malay votes with the ruling party?

There is also the likelihood that with Chinese using their political clout to pursue their own racial interest and demanding constitutional change or if not ignore constitutional articles with regard to Bumiputera.

The result is more the open Bumiputera in Sabah and Sarawak will vote along racial lines too.

This can be seen to only lead to chaos. Perhaps there will not be bloodshed, but racial tension, disharmony and prejudice will be on the rise.

The RM3 million to fulfill Dato Najib's promise to SRKJC Rasa, even though they did not deliver the votes to BN, is a simple but profound gesture on the part of the Prime Minister. It shows he is commited to bring the nation forward.

He has shown his commitment to honour the perkongsian kuasa made and maintain to give the seat to MIC despite demand by UMNO. He did it despite sabotage and lost few peti undi due to UMNO Ketua Cawangan working inconspicuously with PKR adamant to have a Malay representative for the area.

Multiracialist PKR used that weakness in UMNO to play the Malay racial card without shame. What is the rationale of voting a Malay like Zaid Ibrahim who is too liberal and devoid of any Malay value and character in his struggle?

Najib was not only tricked by the Chinese of Rasa but also of Ulu Yam. Some 80 heads of Chinese association and clans made a trip to Putrajaya office and gave their pledge of support for BN but 'decay' on their pledge.

Despite that, Najib insist in honouring his words. Some may ridicule his words of "saya tidak ada hutang" but true enough, he delivered what he promised till he has no more outstanding promises in Hulu Selangor. He solved the flown rooftop in Bukit Sentosa, land issue of Felda Sungai Buaya which Khalid is not willing to commit and contributions to SRJKC.

For the Chinese that did not honour, they will forever beholden for not honouring their part of the bargain. They can claim it is their rights but Confucian principle despise acts of lies and deceipts.

This is not the first time the Chinese voters have done such.

Perhaps the Chinese community are willing to accept being seen by the rest of Malaysians as liars and dishonourable. Let that guilt for not honouring their words haunt their conscience.
at 4/30/2010 03:30:00 PM

Anonymous said...
This comment has been removed by a blog administrator.
4:10 PM

The Malaysian Chinese are only good at one thing: being Chinese.

A dear friend of mine told me some time ago.."Its a sin to the chinese if they do not cheat" so beware when dealing with them.
In the case of Hulu Selangor, being the opportunistic kind, voting for the opposition further entrenched their cause..."head i win, tail you lose"
I hope our PM do realise this... cos we Malays feel that UMNO has deviate from its objectives... which slowly breeds anti UMNO among the Malays...

How much the Indian get ? NIL.

Stop calling the chinese like this. I saw some of the comments here " Good chinese is a dead chinese?" Please do not go overboard. Like you are saying you rather have a dead chinese than living chinese? Please! Even how supportive you are to BN, please take notice of the sentiment when some read it. Am I right? Never bother what political party you support. I hope my comment will not be removed as I just want some people to comment properly and use brain first before talking.

If you could ignore those you can't tolerate.

Just like I try as much to ignore those that said the good Malay are dead Malays.