Matthias opt for prison to prove a point 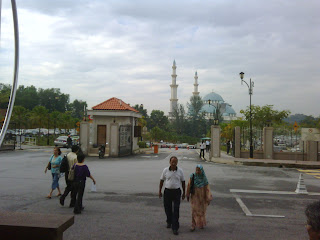 Had just returned from the Jalan Duta sessions court to see Dr Mahathir's former political and vociferous lawyer Matthias Chang being send to Kajang prison for one month. He had opted for a month prison instead of paying a RM20,000 fine for contempt of court.

The paper reported that Matthias had commited contempt of court for his action to leave the court during his trial for a petty isssue on non payment of a disputed amount charged by American Express credit card.

Matthias issued a press statement on March 31st to explain what principally happened on March 25th in court, below:

My conviction by Justice Noor Azian Bt Shaari is a clear example that judges are above criticisms, no matter what they say in court - making snide remarks, belittling counsels, denigrating their integrity, being rude and offensive to litigants and lawyers and conduct calculated to intimidate.

Judges do so knowing that they are immune from any legal action. Additionally, they have the weapon of "Contempt of Court" to ensure that any opposition to their obnoxious conduct will be put down as being disrespectful to the court.

A case in point - a former Federal Court judge in delivering his judgment made defamatory allegations against a former finance minister who was not a party to the proceedings. It was a grievous wrong. It was only when the former minister, at great expense in engaging senior lawyers, applied to have the statements expunged, that the wrongs inflicted on him were somewhat put right. However, no action was taken against the judge. But of the millions who read the defamatory statements published by the mass media, how many knew that the statements have been expunged and the judge had no business whatsoever to defame the former minister? A man's reputation and integrity has been smeared beyond repair. For those who cannot engage a lawyer, their fate is buried in the memory hole.

Several years ago, I had commenced legal action against leading members of the Freemasons, which included an Appellate Court judge. The High Court judge told my counsel that unless I withdrew my case I would be cited for contempt. My counsel was courageous enough to tell him off, and he backed off, and the abuse by the judge was avoided. My counsel was a former President of the Bar Council.

To cite one example of Justice Noor Azian's unbecoming conduct as a judge in my case before her - after ordering my arrest and having placed me in custody at the basement of the Court Complex at the instigation of Defence Counsel, she asked the counsels present for directions as to how to proceed with contempt against me. Defence Counsel, one Mr. Prakash Menon gave wrong advice to the judge, not even knowing that the relevant law was amended. When my counsel attempted to draw her attention to the amended law, the judge interjected and went on a tirade of insults and abuse, accusing them of conduct unbecoming, unethical behaviour and lack of decorum.

When my counsels, as was their duty, drew attention to the relevant laws, thereby saving her much embarrassment for her ignorance, she did not retract the derogatory statements and or thank my counsels for their assistance. Such is her arrogance.

Such abuse is all too common and while many lawyers have privately complained about such behaviour of judges, few have dared to take any action.

For my stand against such abuse and conduct unbecoming of a judge, Justice Noor Azian took it upon herself to be "judge, jury and executioner". No doubt, such a law exists that gives her such draconian powers. It does not mean that it is right. The law was amended, after Zainur Zakaria was cited for contempt when he was defending Anwar Ibrahim in the first sodomy trial.

The amended law is an unjust law and is prone to abuse by judges. Such an abuse has occurred in my case.

I was fined RM20,000 to be paid within a week from 25th March 2010. I refuse to pay the fine and I am willing to go to jail in protest against such a draconian law. I had initially contemplated to appeal to the Appellate Courts, but soon realised that whatever the outcome the draconian law will remain. I therefore, decided not to appeal.

It is my hope that my incarceration will draw attention to all concerned that this specific law of contempt, Order 52 1A of the Rules of The High Court 1980 is unjust, has been abused and will be abused in the future.

In closing I quote:

"One who breaks an unjust law must do so openly, lovingly, and with a willingness to accept the penalty. I submit that an individual who breaks a law that conscience tells him is unjust and who willingly accepts the penalty of imprisonment in order to arouse the conscience of the community over its injustice, is in reality expressing the highest respect for law."

Before facing up to today's prison, he what he is fighting in a other press release. Before that let's read his note on the new contempt of court law which he described as draconian. Read below:

THE AMENDED DRACONIAN LAW OF CONTEMPT IN MALAYSIA

Order 52 1A of the Rules of the High Court

(1) If a contempt is committed in the face of the Court, it shall not be necessary to serve formal notice to show cause, but the Court shall ensure that the person alleged to be in contempt understands the nature of the offence alleged against him and has the opportunity to be heard in his own defence, and the Court shall make a proper record of the proceedings.

(2) Where a Judge is satisfied that a contempt has been committed in the face of the Court, the Judge may order the comtemnor to appear before him on the same day at the time fixed by the Court for the purpose of purging his contempt.

(3) Where such person has purged his contempt, by tendering his unreserved apology to the Court, and the Judge considers the contempt to be not of a serious nature, the Judge may excuse such person and no further action shall be taken against him.

(4) Where such person declines or refuses to purge his contempt, then the Judge shall sentence him.

The reason Matthis is willing to opt for 1 month imprisonment. Read below:

INCARCERATION OF MATTHIAS CHANG POSTPONED TO THURSDAY, 1ST APRIL, 2010 AT 9.30 AM

At 3pm Matthias Chang presented himself at Justice Noor Azian’s Court to commence his unjust sentence of one month’s imprisonment for contempt of court in opposing her abuse of his three Counsels and of himself.

Many of his friends and colleagues were present to lend their support.

However, after waiting for one and half hours outside the Court premises, Matthias and his Counsels were told that the Judge was on leave and that the Deputy Registrar would be handling the matter and deliberations would be in chambers.

However, Matthias and his Counsels refused to enter the Deputy Registrar’s chambers on account that the said Judge on the 25th March 2010 insisted that all deliberations be held in Open Court and in full view of the public and the deliberations duly video-recorded. They insisted that as the Judge had convicted and sentenced Matthias in open court so as to humiliate him, the enforcement of the contempt order likewise should be done in Open Court. Matthias conveyed to the Court’s officials that he was fighting on a matter of principle and the matter must be heard in Open Court.

One of the largest Chinese NGOs, the Malaysian Federation of Kong Siew Association (a Chinese Clan association) represented by the President, Mr. Michael Ho and members of the Executive Committee offered to pay the fine of RM20,000 so as to prevent the incarceration of Matthias and a bankdraft for that amount was procured.

However, at the insistence of Matthias, the same was withdrawn, as he insisted on serving his sentence to expose the draconian contempt law in Malaysia and such abuses.

At the close of the day, Matthias’ Counsels were informed that as the time for paying the fine of RM20,000 only expired today i.e. Wednesday, 31st March 2010, and as Matthias has refused to pay the fine, he could only served his sentence on Thursday, 1st April, 2010.

Matthias then informed the Court officials that just as he had presented himself today, he will do so again tomorrow (Thursday) at 9.30am at the court premises to serve his sentence.

In Matthias Chang’s Press Statement issued today, he referred to two other occasions whereby Judges have abused their power.

However, Matthias informed the press who were in attendance, that there were other major cases of abuse committed by judges, namely that of Justice Ian Chin of the Sarawak High Court who made disparaging remarks against the former Prime Minister and then made several seditious remarks, one of which was that Malaysia used similar methods as the East Germany’s secret police, the Stasi. No action was taken against the judge for his defamatory and seditious statements and it was only after a police report was lodged against the said judge by Matthias that he resigned.

This is an alarming trend and if judges are allowed to abuse their position to cast aspersions, inflict defamatory allegations on litigants and their lawyers and utter statements calculated to intimidate, there can be no justice and the entire judicial system will be brought into disrepute.

We hope that the incarceration of Matthias Chang will open the eyes of the civil society in Malaysia to this insidious danger.

We thank you all for the support and we hope that you will continue in your efforts to demand that the injustice of the conviction inflicted on Matthias Chang be overturned and that the draconian contempt laws of Malaysia be reviewed and revised.

You've made your point, Matthias. I've helped to essiminate what you wish the public to know. Now that you are inside, you can't stop us from doing something from the outside. We are getting you out the soonest possible. There onward to continue your fight.

Is there a recourse to view the court proceedings in his case to prove element of bias and incompetence on the part of this judge?

As for the bar council, good to see their "consistence" in support for a fellow barrister.