Speak up not without fear, but with facts 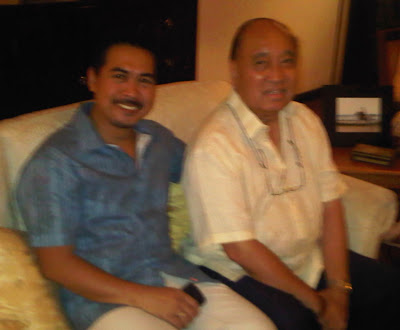 Tan Sri Robert Phang and schemer Singaporean Rosli Dahalan
The former outspoken member of one of Malaysian Anti-Corruption Commission (MACC) panel, Tan Sri Robert Phang was relieved by MACC from allegations of attempting to bribe a Secretary General of a Ministry for assistance to secure a RM900 million contract.

Although Phang tried to put up a bold front to say he will continue to speak up without fear, there is a tad note of restraint in his words. Noticably he didn't bitch about Tan Sri Gani Patail who was also "acquited" by MACC.

That made this blogger feel sad. Do continue to speak without fear, but do it with facts. If there is no proof, the least is a sensible argument and storyline. For this blogger intend to resume his expose tomorrow onward.

It does not make sense and cannot be proven that MAS lost RM8 billion during the tenure of Tan Sri Tajuddin Ramli as Chairman. The publicly available documents of audited annual reports shows the losses is hardly RM1 billion and with reasons. How could the figure deviate so much?

Tajuddin could have done mistake and error here and there. He is human with lots on his plate to chew on then. However, Phang can't make a big fuss based on third party allegations, what more these allegations are spinned versions of facts and data.

Phang should have known that those involved in the allegations - Rosli Dahalan, Dato Ramli Yusoff, Prof Dato Din Merican, Raja Petra Kamaruddin, and many of those staff inside MAS - are doing it out of personal grudges, malicious intent and political opportunism.

This blog will resume to make further reveal their wicked game of lies and deception with facts and documents.

The Malay Mail report of Phang's response below: 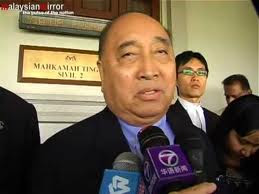 'I will continue to speak without fear'

OUTSPOKEN Tan Sri Robert Phang Miow Sin, who has just been cleared by the Malaysian Anti-Corruption Commission (MACC) of bribery allegations, said what happened will not deter him from highlighting the truth about matters affecting the nation.

"I will continue to speak without fear as the nation needs daring speakers like myself," said Phang, who is in his 70s, when interviewed by The Malay Mail.

"Since I'm very outspoken on various issues, some people have tried to stop me." Phang resigned as a member

of MACC's consultation and corruption prevention panel soon after an anonymous blogger's allegation in January that he tried to bribe a senior government official, a secretarygeneral of a ministry, before Hari Raya last year, to induce the awarding of RM900 million worth of contracts.

The blogger also said Phang had hidden bribe money in a T-shirt and that the senior government official had told Phang to get out of his office.

"It saddens me when people resort to creating lies but the truth will always prevail in the end," said Phang who left his MACC position in order for the commission to investigate him.

"I stepped down as a challenge to the accusers to come forward and the fact they did not shows they are irresponsible cowards."

Phang said if any more bloggers spread malicious lies about him, he would continue to stand up to them.

"Bloggers who make accusations should have the integrity and courage to identify themselves," he said, adding during MACC's investigation, he also engaged the services of a lawyer and private detective to assist in the commission's investigations.

"During my ordeal, I was fortunate to have moral support from various people, including former Attorney-General Tan Sri Abu Talib Othman, and I told them there was no need to worry as the allegations were totally baseless.

"Unfortunately, the anonymous blogger who accused me could not be traced."

Hope he is not serious about engaging private detective because a man like him do not deal with PIs but tatooed hoods. Go ahead, make my day. 下一次將是非常有害的。

This blogger neither need the limelight nor is stupid to be embroiled in time wasting personal civil suits. This is us doing our citizenry whistle blowing responsibility.

In the meanwhile, this blogger have an unfinished business to present another side to the story hidden by the public drama and propaganda by this group of people for years.

There are supporting facts and documents to show, counterspin of their lies and disinformation, and inside story of their personal intrigue.

Anonymous said...
This comment has been removed by a blog administrator.
1:40 PM

"The publicly available documents of audited annual reports shows the losses is hardly RM1 billion and with reasons. How could the figure deviate so much?"

It was the Board of Directors of MAS itself who lodge a report about the 8 billion. Don't believe me? Ask Idris Jala

"Unfortunately, the anonymous blogger who accused me could not be traced."

BECAUSE HE'S THE VOICE

It shows you do not know about this issue and have not been reading this blog's coverage of MAS.

The RM8 billion allegation was first made by Salahuddin Ayub which till today he cant furnish the basis for numbers.

Another time is in a report by CCID Director, Dato Ramli Yusof to Tun Abdullah which was nevertheless cc to Idris Jala, Munir Majid, etc.

I wouldnt refer to Idris Jala if I were you.

He cannot differentiate between a P&L Acct, C/A and Cashflow Statement.

If he were to make such an allegation and could not substantiate it, he can get sued.

The proof is in MAS's own 10 years audited financial accounts. There is no way of reversing those documents!!!

Unless you can prove me otherwise, it cant be him. Impossible!

Those commentators - who can't be behave, are making hostile comments, and making cheap accusations such being paid bloggers, your comments wont see daylight.

Will not entertain such shallow minded commentators here.

Funny you should mention shallow...when your knowledge of fraud and audited accounts comes across as deep as a puddle of water...publish this if you dare..and lets chat about the auditors obligation to uncover fraud....

I am in the mood to take you on, despite you do not have anything substantive to say despite just speculations and guesswork.

Not even a hearsay.

Have them been any news or anything on the grapevine of attempts by the auditor/s to review all the accounts during Tajuddin's tenure!

If you can't understand what that means, tak payah nak argue out of perception and prejudice.

Lucky I am not a PAS supporter. I would have asked for 4 saksi :)

Suggest you read the first piece on December 16 2010 on the account here.

Ok come, lesson 101 in audited financial statements. The auditor is NOT responsible to detect fraud. That is the responsibility of management. (If you've ever read an audit report, you would know this). What's being alleged here is management practice so bad, as to indicate fraud..Once again, i ask you, where does MAS stand financially to SQ? Ok, forget financially, how about service quality? Ok forget even service quality, how about perception? Sigh, forget it all. You probably have your head too deep in UMNO"s arse to figure any of these out. Oh yes, for the love of god, stick to writing in Malay...

Not sure what happen of post Idris Bala' MAS for the past one or two years. He wrecked MAS's capacity bad with his indiscriminate slashes.

Because I do remember clearly despite facing financial problems the past many years, MAS was still winning awards for its cabin services.

On your claim that Audit 101 taught auditors is not responsible to detect fraud.

I never took Audit 101 as subject in school and memory of school or college is too long ago.

But when I was managing, I know that if something is not right and figures are questionable, auditor may decide not to sign the accounts.

Cant say for the not so smart analyst and investors who refuse to be critical and analytical.

try writing in malay too