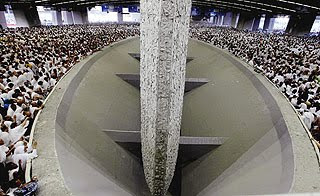 [This is a scheduled posting]

After wukuf at Arafah on Saturday, we would have moved to Mina by dawn and on the way, stopped over at Muzdalifah to collect stones.

The stones would be used for the stoning the devil ritual aimed at the three Jamrah. This is emulating the three instances the devil tried to persuade Prophet Abraham from carrying out God's order to sacrifice his son, Ishmael.

On 10th Zulhijjah or Sundays, we will begin with the stoning of Jamrat Aqaba. It is a symbolic stoning of syaitan and it's followers.

It is also the symbolic stoning of our inner desire or nafs to submit to the persuasion of syaitan.

The next three days on Zulhijjah 11-13 or called the days of Tasyrik, we will be repeating the same ritual at all three Jamrah of Ula, Wusta and Aqaba.

The following is a Saudi Arabian documentary on the development of the Jamrah complex. This was a response to the problem of congestion in performing stoning at the Jamrah that resulted in death in 1990 at Muassin tunnel.

Upon completion of stoning of the Jumrah, one will cut the minimal three strain of hair or shave ones head in the tahallul. The last rukun to complete the Hajj is the wakaf in Mekah.
at 11/06/2011 12:25:00 PM