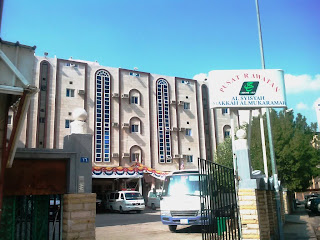 There are sayings that we, human can plan, but it is God that determine.

The plan this week was to take a rest from the more physical ibadah to recuperate the body and reserve energy for the big day of Arafah. But I ended up getting a bigger physical challenge that really humbled me.

I got myself hospitalised on Monday and only got released yesterday afternoon, just a day before we move to Arafah this evening.

The pain was too intolerable to bear that the Maktab klinik rushed me to Tabung Haji's makeshift specialist hospital for breathing problem at Pusat Rawatan Syisyar, just 5 miles from Mina.

I've suffered years of pain from slipped disc, the pain of gout attacks, tasted pain of gastric and stones, and many kind of sports injuries. When it is intolerable, it does not mean I lack willpower and was making excuses. 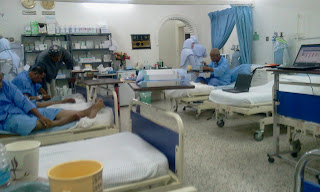 As I lay on the bed in the emergency ward, the nurse awoke me to remind of asr.

The local help boy, Arab speaking Malays from Patani, came with water spray and basin offering to assist me to do wudu' (ablution). Despite the unbearable pain, I forced to clean myself for prayers.

I had missed zohor when the ambulance had to wait out the mass of human, the traffic jam and road block clear first. Although I did niat to respect the zohor prayer's time while in the ambulance, I still had to perform it. It means I have to perform two prayers.

I tried to find the best sitting position to perform prayers on bed. Then I realised I could only sit. I couldn't move my right hand and arm. Neither could I prostrate (sujud). My movement was limited and any attempt to move will be awfully painful.

Not so much for tolerating the pain, tear rolled out my eyes as I realised how awkward I was praying before God on holy land soil!

I felt humbled by my physical limitation. I felt insignificant. I could be great for whatever I had done in the past, but at that moment I wasn't able to perform prayers even with minimal compliance.

Out of it, a deep sense of realisation came to me. If I could still pray with such limitation, there is no excuse for me to have missed any prayers in the past. So flexible is the requirement to pray that even if one is totally physically handicapped, one can still pray by mere movement of one's eye lids.

One of the specialist unraveled a comprehensive and logical sounding version of my medical situation, never told by my previous doctors.

I was concerned and worried. It was not so much of being scared of dying but I was more worried of not being in Arafah, the real Haj.

I must say that in moments like this, my wife and her sister was a pillar of strength that I needed. She came to visit me despite the difficulty to travel down. Their only words were not to worry, let's pray together for your immediate recovery. We must be in Arafah together.

I was able to SMS my roommates and friends in Mekah and Kuala Lumpur to seek their prayers. I managed to email my family before my Galaxy tab ran out of power.

True, there were those double dosages, close monitoring of your bodily responses, and someone to correctly keeping time. I have not fully recuperated but I wouldn't have had the best breath in many months if it is not for those doas.

There are those close around me that would have spew their judgemental words. But those doas really mattered more because there are coming from those who loved you.

It was really moving.

These are but the many detours in my spiritual journey to perform the Haj.

Big and small detours here and there which can be seen as setbacks but only deepened my conviction of my faith, the will of God, and spirituality of Mekah.

There were moment I had to repeat several rounds of tawaf (circumbulation of the kaabah). That can be quite frustrating and tiring.

But I redo it patiently. I repeated the rounds, reread the doas (prayers), and the rituals. Then I realised that repeating the doas only brought me greater enlightenment.

There was a time I had mistakenly "overdosed" myself with my Lassix pills (diuretic pills) prescription while in ihram clothing to do the umrah. I kept going to and fro to the toilet, through the pack crowds, something like 5 times. It was a time my feet weren't strong enough and was just gaining strength.

To my surprise, I perform the tawaf and saei (going to and from the hills of Safa and Marwah) without much physical strain and came home physically fitter.

Mekah is so packed these days with millions of pilgrims all within the city of Mekah. The routine of entering and leaving the Masjid can be a physically abusive affair for the physically limited but not for me.

I could push away any attempt to cut-in or rush in. I do not rush and push others but my current physique enabled me to push aside anyone blocking the human traffic. And when I am being pushed, more often than not, I was capable of pushing back and get my way through.

At one time, I was quite pissed with the impatient and refused-to-queue Pakistanis, and Afghan men and Turkish women that I applied Newton't third law whenever they were pushing and shoving their way around. The Africans, I must acknowledged are more patient and courteous these days than they were 20 years ago when I was here.

That was until one day during a rush I was reminded, "Hey, what am I doing? Aren't they the Muslim brothers and sisters that I regularly prayed for their well being?"

From thereon, I mellowed considerably and I avoid the Masjid rush so that I do not end up trampling on my brother and sister Muslims. Knowing how much further away they stayed from the Masjidil haram, it made me appreciate their enthusiasm.

If only they had the patiance and discipline of the Malays... 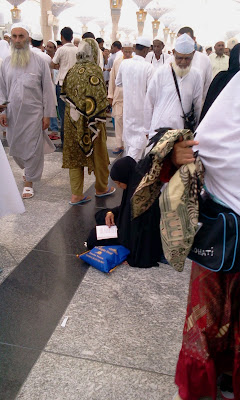 Since all of us are down with cough, we tried to recuperate ourselves in our rooms. I spend much time doing prayers, fasting, zikr and reading the Quran by myself.

To my surprise, I found much comfort in the calm and silent environment but very much on Haram soil.

I was asking myself, how could that be.

How could I found more peace by myself in hotel room than in the holy Masjidil Haram where the pahala (reward) from one's ibadah is significantly multiplied?

I asked how can I find peace in the rushing crowd and with the presence of those selfish impatient lots. It is not just about Islam appreciate peace and serenity.

My mind wanders and I shared it with my fish monger and grasscutter roommate. He was more forthrightly honest with his question.

How could one fulfill one's spiritual self in those chaos?

It reminded me of Rumi's poem. His popular in the west these days.

I tried to find Him on the Christian cross, but He was not there; I went to the Temple of the Hindus and to the old pagoda, but I could not find a trace of Him anywhere.

I searched the mountains and the valleys but neither in the heights nor in the depths was I able to find Him. I went to the Kaaba in Mecca, but He was not there either.

I questioned the scholars and philosophers, but He was beyond their understanding.

I then looked into my heart and it was there where He dwelled that I saw him; He was nowhere else to be found.

Or the Nusantara version:

Maybe I have not understand it deep enough yet but I am beginning to appreciate the meaning better. I hope I will uncover more of those many unanswered questions and puzzles of being closer to God at Arafah.

It was on the day of Arafah and the Prophet's last Haj, Muhammad s.a.w. proclaimed on top of Jabal Rahmat that he said, "I have perfected this relgion ..."

Muslims believed that on the hill of Jabal Rahmat, near the field of Arafah, is where Adam and Hawa were rejoined on earth after being cast out of heaven for eating the forbidden fruit.


The Day of Arafah, the day on which the religion was perfected. It is the second day of the Hajj pilgrimage and the day after it is the major Islamic Holiday of Eid ul-Adha.

It is also the day on which Allah's favour was completed.

Arafah is the pinnacle spiritual moment of Haj. Some opined that it is the "dress rehearsal" to Mahsyar on Judgement Day. God promised no taubah and doa denied on the day of Arafah.

I do hope you gets better to complete your Arafah trip and the rest of the rukun and Insyallah you'll understand Him and yourself better.

Your first duty is to your health. Please take care. God is kind bro. He will certainly recognise your quest. Kalau tidak, payah kita semua.

My prayer to you and your family,"may ALLAH TAKE GOOD CARE OF YOU N FAMILY AND YOU YOU WILL BE ABLE TO COMPLETE YOUR HAJ SUCCESSFULLY" AND MAY ALLAH GRANT HAJI MABRUR UPON YOU ,AMEEN !